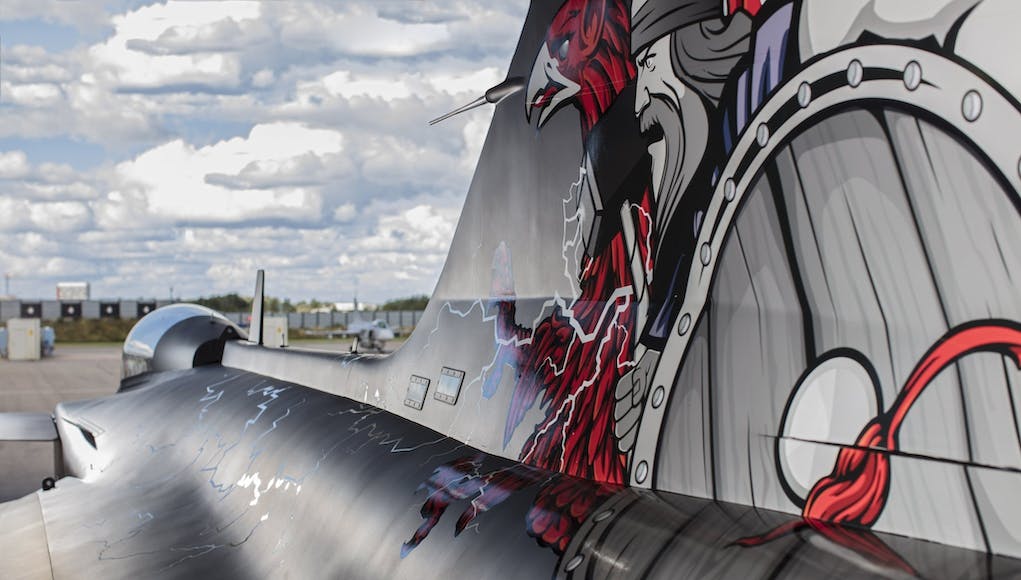 Saab is to offer the Gripen Aggressor for the UK’s upcoming Air Support to Defence Operational Training programme.

Saab presented a new variant of Gripen, the ‘Aggressor’ at DSEI in London last week.

The company say the Aggressor is based on the ‘proven Gripen C-series and is the ultimate platform for the adversary air combat training market’.

There is a growing segment within the adversary air combat training market for highly advanced aggressor capabilities to be able to perform realistic combat training. Saab rather enthusiastically say that the Aggressor provides an exceptional, dissimilar opponent aircraft system against which pilots will sharpen and refine their combat skills ‘so as to fight and win against an advanced enemy threat’.

“There is a major difference in the capabilities provided by the aggressors on the market today and what the need is for the coming years. In order to train as you fight, you need to fly advanced combat tactics against peer and near peer opponents like the Gripen Aggressor. Essentially world class pilots need to train against world class opponents and that is the Aggressor”, says Richard Smith, head of Gripen marketing & sales at Saab.

The company state in a release:

“Gripen Aggressor is based on the proven Gripen C-series fighter weapon system, but has been customised for the aggressor role. It has all the renowned handling and flight characteristics associated with the Gripen C and its advanced sensor and datalink capabilities, but will not carry live armament.

The Gripen C-series is in-service across the world including NATO members and has a firm development plan with on-going enhancements in hand.”

An aggressor, or adversary, aircraft, is used to act as an opposing force in advanced military combat training. Aggressor squadrons use enemy tactics, techniques, and procedures to provide a realistic environment for the fighter pilots to train against.

Saab sees potential for the platform as a high-level aggressor option within both the United States Air Force’s Adversary Air (ADAIR) and UK MOD’s Air Support to Defence Operational Training (ASDOT) requirements, and wherever users look to prepare pilots for the challenges of sophisticated modern air combat.

This may be wildly optimistic but could the jet also be considered for the Red Arrows replacement aircraft? It could help with lowering costs for parts and training ground crew.

It’s a possibility, and 30% of these aircraft are manufactured in Britain, so any order we were to place would be another boost to British industry.

I doubt it considering that one of the justifications for the Red Arrows is to aid sales of UK built military aircraft.

Great idea. Would never get past the bean counters.

I was thinking the same, is Sweden not looking to off load some of their C series planes to help pay for the upgraded E/F. There cant be more than 10 years on the air frames and they should still be up-gradable in the future if the need did arise.

I can’t see Saab offering an Aggressor version of the jet unless it showed a decent saving over going for the full fat C model.

I’d be stunned if the UK manages to find the funds to buy these aircraft though.

TH you are a troll. Do you not appreciate that or just plain rude? The RN is in a mess but not that bad. You are gullible for believing everything you read in newspapers and see on the net. This posting on youtube was probably originating from Russia or Corbyns labour party.

Troll? He’s a typical lefty who has a huge chip on his shoulder that the UK is somebody on the world stage and not just some backwater over run by migrants with its national identity destroyed by Cultural Marxism, just what the hard left want.

I cant see us buy Gripen when we might have a surplus of tranche 1 Typhoons that would make mighty fine aggressors. I believe this is being considered alongside 100sqn hawks.

They have already started scrapping T1’s, as the batch 1 aircraft have limited standardisation with later batches and its the only way they can keep parts backup viable moving forward. With this in mind, It remains to be seen how much aggressor work they will see aside from their core AD work.

The point is to purcahes an aircraft to practice disimilar air to air combat, so using Typhoons would be pretty pointlless in that role I’m afraid.

Though I wonder if a better bet would be to purchase some second-hand F15/ 16’s from America and have them upgraded a little, as a lot of our potential foes are still using older generations of fighter aircraft and this provides it’s oen set of challenges.

Just zone him out. He’s like a needy puppy ignore him and he’ll go somewhere else.

I would be amazed. We cannot even purchase enough Hawks to replace the 3 squadrons still on the old Hawks never mind find the money for Gripens.

Its unlikely, due to the small number required, however if a private contractor was to buy some surplus Gripens, they would make superb aggressors, very agile and hard to spot visually, with a small Radar signature, they would make any Typhoon driver sweat and work hard for a kill, great training tools.

At $25,000 per flight hour on a lease-only deal then not a chance this will be viable in the UK given ASDOT’s budget. Good look with the BOI and Balance Sheet call if anybody looks to buy them outright along with the other platforms that may be required.