It has been announced that Type 45 destroyer HMS Defender will join the Royal Navy’s efforts to protect shipping in the Middle East.

The Government confirmed earlier this month that the Royal Navy has been tasked to accompany British-flagged ships through the Strait of Hormuz, as part of the International Maritime Security Construct (IMSC).

“This deployment will ensure that the UK has the flexibility to continually commit a vessel to the international mission. Portsmouth-based HMS Defender will ensure the continuous availability of a ship to reassure and accompany merchant vessels.”

“Wherever the red ensign flies around the world, the UK stands by to protect freedom of navigation whenever is it tested. The men and women of HMS Defender will contribute to the IMSC alongside international partners.”

“We always stand ready to take on new missions at short notice, wherever in the world they may be. My ship’s company will work on this new mission with their usual professionalism and dedication, supported by our families back home. Ensuring freedom of navigation in the Middle East is vital to the prosperity of the UK and our allies. I’m pleased HMS Defender will play her part alongside other Royal Navy warships in keeping these essential trade routes secure.”

HMS Montrose, a Type 23 frigate, remains stationed in the region and has so far completed more than 30 transits of the Strait.

Is that to mean there will soon be 4 warships in the Gulf area – HMS’s Montrose,Duncan,Kent and Defender ?

HMS Duncan is returning to the UK, after a deployment of about 5 Months I think.

Montrose under maintenance very shortly and Duncan departed, so Kent and defender on duty, so 2 escorts on station then?

Nope not shortly.. She will be active for a few months yet and even under maintenance will remain at or even less than 48 hrs notice for sea

Thanks for the update. Earlier reports suggested going alongside with crew change end of August, I assume that wasn’t accurate. Interesting she is still at fairly high level of readiness to put to sea. What is the maintenance, purely routine?

She will have a crew change prior to the maintenance period but it wont affect availability or notice for sea. The maintenance will be the usual stuff. Defects, 3m , 6m or annual maintenance…nothing out of the ordinary …stuff that every vessel does all of the time.

Plus 4 MCMVs and a Bay Class and a Tanker..

What a godsend HMS Jufair has turned out to be.

Plenty escorts available if the UK chooses to focus on one thing at a time. Thankfully the planned Far East deployment of a T45 has been shelved. Best to let the US deal with its China problem and the UK can do as Pompeo advised and look after our own ships.

Martin there are not enough escorts as virtually everyone on here suggests. The yank was telling us a few home truths, which I think may have hit home to our leaders. They have the perfect opportunity to increase numbers at the moment with the Type 31 and 26 now likely to be in production soon. As for leaving China to the U.S. we have the Five Powers treaty as a long term commitment so we can’t just leave it to them and personally those countries represent better allies than some others much closer to home.

Agree with all else, but I think ‘the yank’ was pretty much telling us without being direct, that the septics won’t help unless we surrender to their demands for the joint force that they proposed which I think we can all imagine those inclusive aspects would entail kowtowing to their imposed trade sanctions which caused this particular fracas in the first place. We are the cannon fodder in the middle either way for this US/Iranian fall out. The Iranians will target us if we stay independent (they will always see us as the ‘safe’ target as a US ally) and… Read more »

But the point is the UK has reduced the RN and other forces to the point where we cannot even when our interests do not align act independently. The stupidity of the mantra of always acting together with allies had been proven so. When the tankers wars were particularly dangerous the Armilla patrol had 3 escorts, which given rotation would take almost half our escort force today. The U.S. just used our self inflicted weakness to press home the advantage. The answer is around the SDR98 escort force of 32, which could be made up of some lower end ships,… Read more »

Why wouldn’t we have one of our best there right now? What else should they be doing at this moment in time?

She came out of a 20 month refit in April last year so she is fully loaded and updated, and the crew are fully worked up.

We should have a T45 there, but lurking in the background providing area air cover, but the actual escorting should be done by basic frigates, corvettes or armed OPV’s imo.

Paul T; really? Get with the program. Four warships in the gulf simultaneously? If only. Where have you been the last 15 years?!!

If things esculated with Iran they have extensive modern weaponry, in numbers we can only dream of, that would quickly be a nightmare for our warships. So I’d say we should be using top of the line ships to give our crews the best available protection. 2nd rate ships(OPVs etc) wouldn’t last long at all.

If things escalated with Iran, you can be pretty sure, the Typhoons in Cypress will be redirected. I’m not sure if the Arabian states would be happy hosting them though apart from Saudi!

Bahrain has joined the Convoy escort initiative so there is one country onside straight away.

Four? Maybe we’re working up to something. I mean, two 45s, a couple of 23s, a few F35s and apaches, a smattering of SBS, and all backed up by some snarling Tico’s and Arleigh Burkes; that might get a stolen tanker returned…

I really hope not. That ship has sailed, literally.

We ( HMG ) were caught with our pants down and hopefully the lesson that the best, most high tech kit going cannot be in two places at once ( or more! ) and cannot compensate totally for mass.

What a photo that is though! 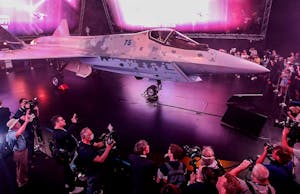