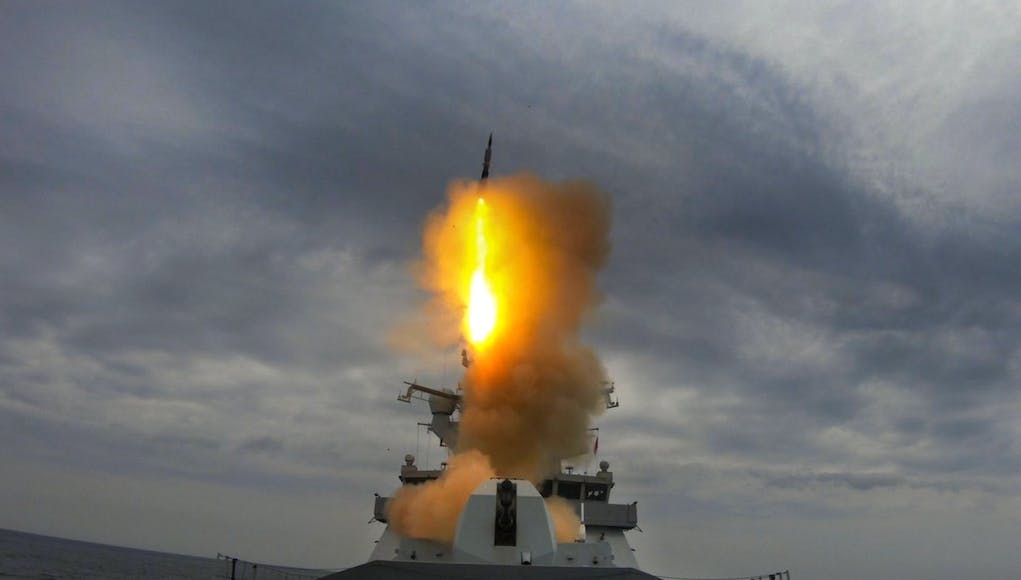 HMS Dragon has fired her missiles off the coast of Scotland in order to shoot down a target but don’t worry, it’s just an exercise.

Formidable Shield 21 is a live 2-week exercise bringing together allied nations in UK waters to demonstrate effective integrated air and missile defence, including interoperability and command and control.

“Formidable Shield is a significant exercise, with 15 ships, more than 10 aircraft, and around 3,300 military personnel involved. The exercise was primarily taking place at MoD Hebrides Range in Scotland which is managed by QinetiQ.

The range complex occupies 115,000km2 of sanitised airspace with unlimited altitude and can be extended for specific trials. This large area makes it ideal for air-launched weapons operations and is a fully instrumented controlled environment which enables the test and evaluation of land, air and sea weapons, systems and training for UK forces and its allies.”

Shame there is no anti-ballistic missile capability.

Does anyone know what our Aster stockpiles are?

Paul T
Reply to  Order of the Ditch

The amount of Aster Missiles in the Royal Navy Inventory won’t be available to the general public for obvious reasons.

Joe16
Reply to  Order of the Ditch

To be honest, everything I’ve read about ballistic missiles at the moment pushes me towards thinking that we should plan for ABM integration on T83 and focus T45 upgrade money elsewhere. Strategic (read nuclear) ballistic missiles will be launched in such world-ending quantity that ABM for them will be a moot point. When it comes to the smaller stuff, like the ones that the Yemeni Houthis launch at Saudi, the UK mainland (and most of the locations where we may do some fighting) are either going to be out of range of that kind of threat, or the launch platform… Read more »

Adding some ABM capability to these destroyers could take some pressure off the USN cruisers and destroyers performing this task for all of NATO.

The French also have demonstrated this ability.

Hi Dan, even two more silos of Aster and or Camm upfront would be a force multiplier on these T45s and if there remaining in service another 10-15 years. I think someone here has said that Aster 30NG is just a software upgrade and not hardware? I’d hope it would be both.

Order of the Ditch
Reply to  QuentinD63

As it currently stands the UK doesn’t operate a single MK41 yet these will be key in Type 26 and probably Type 83. It makes sense to put MK41 on some Type 45s just to get practice using and operating them, removing teething issues with Type 26.
Let’s be honest the Type 45s will have their service life extended when we fail to order the 83s on time.

I’m still not convinced ABMs will work in reality. It’s not like Israel iron dome where 90% success rate is a success. These missiles cost 10s of not 100s of millions and as Putin pointed out if they ever where to launch icbms they would launch 100s.
It makes sense for Japan and S Korea where they face a greater threat that is likely to be in manageable numbers.

China has conventional ballistic missiles that are pretty capable against surface ships (some of which are designed specifically against US Carrier Groups). I think they would be a worthy investment for us even if the shoot down rate isn’t exactly great.

Allegedly usable against a carrier.
I real life that capability might be a bit of a stretch .

Especially where the barge targets were either anchored in place or being towed along a known course and track. Doing that in the open ocean when your kill chain has either been sunk, shot down or jammed will be neigh on impossible.
However, where ships have to sail relatively close to land, Red Sea, Taiwan straights etc, then there’s more of a chance that these weapons will be useful as there’s more assets that can be used to track the ship. So ship based ABM would be more than useful.

They will have this capability at some point and when you take into consideration that carriers like the QE and the Ford class will be in service for the next 50 years, then military planners have to assume that this will be a threat going forward. The link below shows how they already have near constant coverage close to their shores and are looking to even improve on that going forward. http://www.eastpendulum.com/la-constellation-yaogan-30-est-terminee In terms of the actually weapon it seems the thinking is to use other ISR assets to get the warhead as close to it’s target as possible where… Read more »

I don’t believe they are there yet but I have little doubt that they will be able so threaten ships in the near future. They are working systematically towards this goal and with their resources its more a question of when than if imo.

I’m still not convinced that anti-ship ballistic missiles will work in reality, either. Sure, they will eventually, but I don’t know that the current crop will do the job with the kill chain as it exists currently.
Edit, oh, I notice you have the same reservations. I should always finish reading a thread before commenting…

I look forward to this headline being reused when the lasers come to town.

Is that after the Rail Guns ?