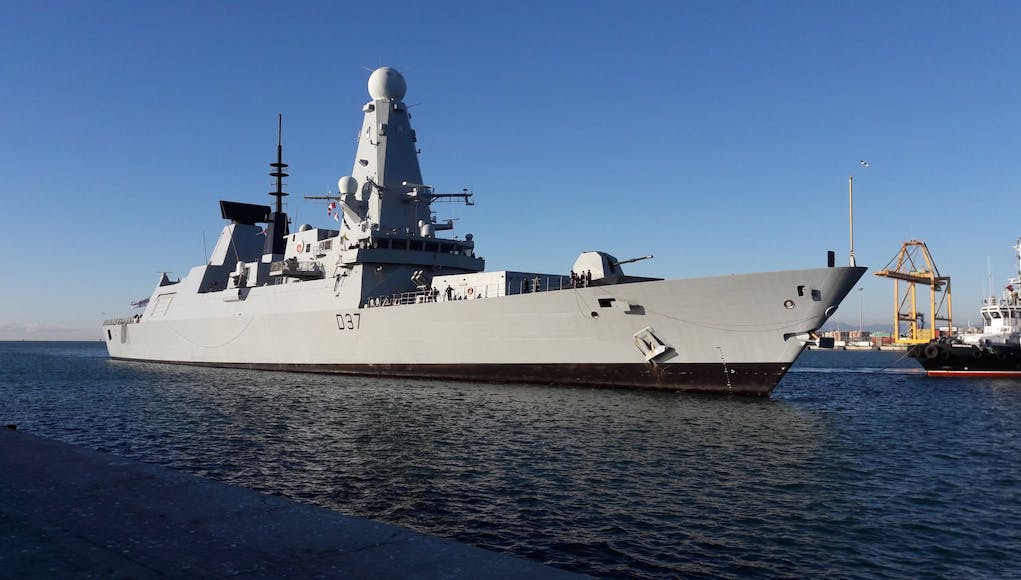 HMS Duncan has arrived in Spain as part of efforts to strengthen the defence relationship between the UK and Spain, say the British embassy in Spain.

The warship recently deployed to the Mediterranean to take over as flagship of a major NATO task group. The destroyer left Portsmouth Naval Base last week to resume the role after a three-month stint in charge last year.

Standing NATO Maritime Group 2 is a multinational, integrated maritime force – made up of vessels from various nations – that is permanently available to NATO to perform a wide range of tasks, from participating in exercises to crisis response and real world operational missions.

The destroyer will return to her home port later this year. She takes with her an embarked Wildcat helicopter based at RNAS Yeovilton.

After a week of FOST, DUNCAN transited the Straits of Gibraltar and is entering the port of Malaga. Come and visit the ship on Tuesday 1000-1400. @SNMG_2 #justsendduncan pic.twitter.com/C7coYlD6kT

HMS Duncan, the sixth and final Type 45 destroyer, was the most complete at launch in October 2010. She is the first of the Type 45 class to be capable of deploying Harpoon say the Royal Navy.

Stay well away from Spain. Let them stand on their own feet for once.
Spain only ever wants the U.K. when there is money on offer. They hate the Brits. Don’t be fooled by the two faced fork tongued bearded in Madrid.

Agree 100%. Why do we deny the lessons of history AND what our “friends” are doing at present ? Pathetic.

Duncan is the flagship of a NATO force, so that doesn’t just involve Spain and the UK.
Saying the Spanish “hate the Brits” is an overgeneralisation.

>They hate the Brits.

What rubbish. The feeling isn’t mutual. I don’t know anybody who has any antipathy towards Spain at all. If British people felt that way they wouldn’t go to live or go on holiday there.

They go there for the sun.

FOST (Flag Officer Sea Training) offers a number of training packages. The usual 6 weeks of hell post refit (BOST), continuation training as required and pre-deployment training.
Duncan would have just done a standard pre-deployment package focused and tailored to the threats she is expected to face and the missions she may be asked to complete in her theater of operations.
The tailored packages of Pre deployment training for say the West Indies is vastly different from Gulf focused training. It all depends on where you are going.

Agree with Jack.. A member of my family is Spanish, she’s not always saying how she hates the Brit’s.. Quite to the contrary actually.

Spain will never be happy until they get Gibraltar back,and that will never happen so yes there’s not alot of love for the Brits.I should know i was stationed out in Gibraltar for 6 months and while the Spanish aren’t openly hostile their not exactly welcoming either,I think two faced and double standards about sums them up.

let’s face it I avoid my fellow country people when I am abroad. we have a terrible reputation of turning into nutters the second we leave the country. I don’t blame Spanish living in holiday resorts for having less than pleasant thoughts about brits. But it’s the minority of spanish that live in these areas.

Could not agree with you more Steve.

A great idea getting our ship to Malaga in January if they can get our towels down on the sunbeds now we will have definitely beaten the Germans.

I don’t think Europeans hate fellow Europeans at all. There is however political manoeuvring by the continental European governments which repeatedly make our government look stupid by being too bloody soft, inept and naive.

Umm so this is why they’ve stopped sending ships into Gibralterian waters recently. Wonder how long it will be before they start up again ?

Yes, the Spaniards DO actually hate the British. Or, more properly, they hate what Britain represents in their collective psyche, i.e. Britain “stole” Spanish grandeur and prestige as they lost their own Empire to incompetence, greed and rebellion of their thoroughly abused subject peoples. “Perfidious Albion” is a quite common phrase in even the semi-official ABC news agency, let alone more populist outlets.. This same newspaper carries “historical” articles which tend to stoke this romanticised image of having been betrayed, undermined and cheated of her rightful place. Criticism in Spain of the Spanish Imperial past, particularly their rape of South… Read more »

there are plenty of equiv in English about other nations and yet I don’t think there is any common hate of other nations. We like to joke about France but reality is the vast majority don’t hate them and instead regularly go there on holiday.

Its the people in power that love to spread propaganda , that’s how they stay in power .