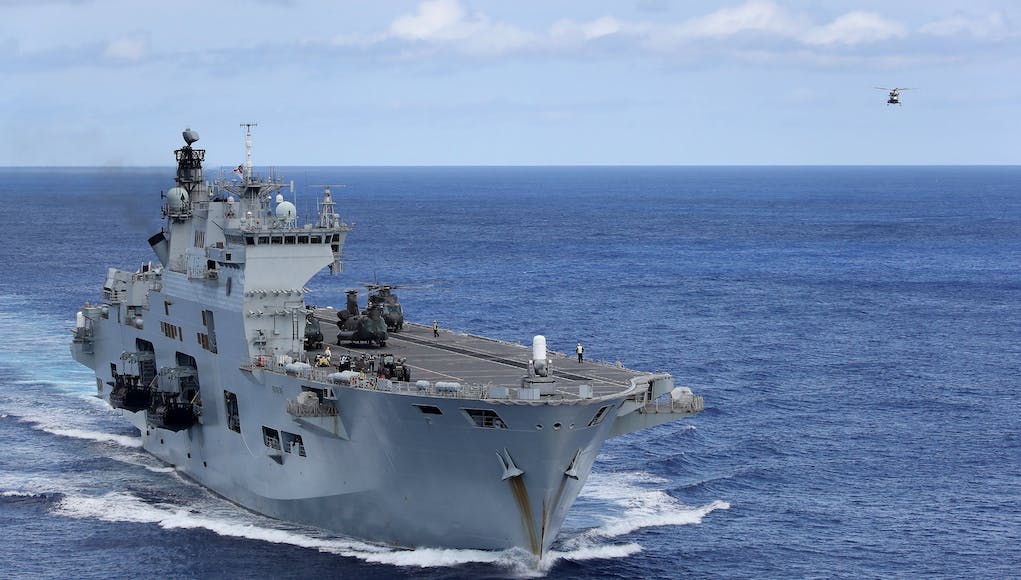 The guns on HMS Ocean, including her Phalax CIWS fit, will not be transferred to Brazil it has been confirmed.

Then in January this year, we were able to confirm the sale and reported on claims that We also understand that there were doubts over the retention of the Phalanx CIWS by Brazil.

The information came to light when Kevan Jones Labour MP for North Durham asked in a written parliamentary question:

“To ask the Secretary of State for Defence, whether (a) Phalanx CIWS and (b) light gun mounts on board HMS OCEAN will be donated to Queen Elizabeth class carriers or other Royal Navy vessels once that vessel is decommissioned.”

“The Phalanx Close-In Weapon System and light gun mounts, (which I have taken to refer to mini gun and general purpose machine gun mountings) on board HMS OCEAN will remain in the Ministry of Defence inventory to be allocated to Royal Navy ships as determined by operational requirements.”

The Phalanx CIWS radar-controlled gun system provides “last chance” defence for ships against anti-ship missiles and aircraft. It automatically detects, tracks and engages anti-air warfare threats such as anti-ship missiles and aircraft. It features a 20mm M-61A1cannon, search and track radar and FLIR in the Block 1B model. To date, the United States Navy and 20 other nations have purchased more than 850 Phalanx systems.

Our Frigates and Destroyers, main capital ships like Carriers and LPDs and RFA vessels should all have CIWS as standard.

The 42s, like other RN warships were found to be badly underarmed after the Falklands and got 2 x Phalanx but they did not spread to the rest of the escort fleet save batch 3 T22 which got Goalkeeper. I think the Invincibles had either Phalanx or goalkeeper if I recall.

All of the ships you mentioned always deploy with CIWS. The only exception is the type 23 due to no room, however the type 26 has CIWS and by the looks of it the Type 31 might have it also.

Understood Ben, as noted on other thread.

I was not aware the RFAs like Forts or Waves use CIWS.

What happens if there’s an emergency and more of the fleet needs to sail? I would like to see CIWS fitted as standard deploying or not just like whether a ship has it’s Pacific RHIBs which it has regardless.

No idea of the cost of the things. I recall gunbuster mentioning that they can be bolted on where’s Goalkeeper needed a more complex fit.

Invincible and Illustrious both used goalkeeper. Ark Royal used Phalanx CIWS, which visually separated her from her sister ships.

Pretty much zero surprise there, not sure why people made a fuss about it. The UK needs those guns back in the equipment pool and Brazil doesn’t operate Phalanx, they do operate the DS30M on their Amazonas class Corvette (River OPV) but I suppose if they want those they will need to buy them new. The Brazillian navy will probably take the four Dual Simbad launchers and the five 12.7mm HMG off the NAe São Paulo for fitment to Ocean (soon to be the NAe Minas Gerais more than likely). I can see the Artisan mount staying as we are… Read more »

Apparently the sale will only net £55million. What happened to the other £29milion?Swiss Tony?

Grubbiest
There is no way the current MOD mandarins are ever going to make a right decision. We will sell off Ocean for pennies then regret it at our leisure in the future.
At least the 3 phalanxes can go to HME QE that still has zero CIWS at this time. Most under armed carrier in the history of the world.

Mr Bell HMS QE is actually the most unfinished carrier given it is still on FOST, air trials and other testing (like RAS). It has no need of CIWS right now does it?

And as has been widely reported she is now back in Portsmouth to complete fitting out ready to go to the USA in the Summer. Which will include CIWS and other kit.

Nothing you’ve just said is true. Selling Ocean while she’s actually worth something instead of keeping her past her intended end-of-service date is the right call, especially as we need the manpower and helicopters for PoW.

So why does every other carrier operating country in the world see the need to fit self-defence SAMs to their carriers? Even the French have Aster 15 on theirs. What makes us different or special?

Because RN did not learn that much from Falklands unfortunately.
At least the carriers should have CAMM SAM missiles.

And Phalanx is probably the worse CIWS around with their lack of range.

The Italian LHD that started to be build which is in fact capable of F-35 operation has 32 SAM VLS and 3 76mm guns.

David I totally agree with you. HMS Queen Elizabeth will only have the three Phalanx CIWS. The Italian Cavour has Aster 15s. My friend says that all the defence will be covered by her escorts but that isn’t enough in my opinion.

I hope they are not just going to pool a frew CIWS and fit them to certain ships when there is a flap on to save money. All major units should have these fitted as standard. Where did the onrd go from the 3 previous carriers?

To me, it is fairly evident that at least ten CIWS systems are required for the Carriers and four Wave class. If they’re not available, for heavens sake order them and stop this endless pussy footing around.

10?! Geez… what school of geometry did you attend?

Though Lusty corrected me that the Tides are planned for 2 each not 1.

I just hope we manage to send out under armed war fighting vessels as we have done since ‘lessons were learned’ after the Falklands conflict when state of the art Skyhawks which would not have bothered a WW2 navy wreaked such havoc. A war fighting vessel must be capable of meeting all threats individually especially when deployed individually. We owe a duty of care to our people that this taken as read.

Agreed. But long forgotten by HMG Bill, as expected.

I remember catching one small part of a documentary, on BBC1 I think and maybe a coup,e of years ago, about some aspects of life in Portsmouth (I think it might have concentrated on the docks but not sure). By sheer coincidence the few minutes I saw were about a fork lift truck loading a Phalanx onto a flat bed truck to take somewhere. There was a bit of drama because the fork lift broke mid way through the lift of the Phalanx from the ground onto the flat bed truck so the very heavy Phalanx was left in mid… Read more »

It was the TV series on Devonport, and we do have a lot and they are very well maintained from what I saw.

Thanks Pacman27. I stand corrected on the location and am reassured that I wasn’t hallucinating about a warehouse full of Phalanx some heavy night out.

“… after some heavy night out.”

The BAE Cutlass, could this be the new Type 31 Frigate?