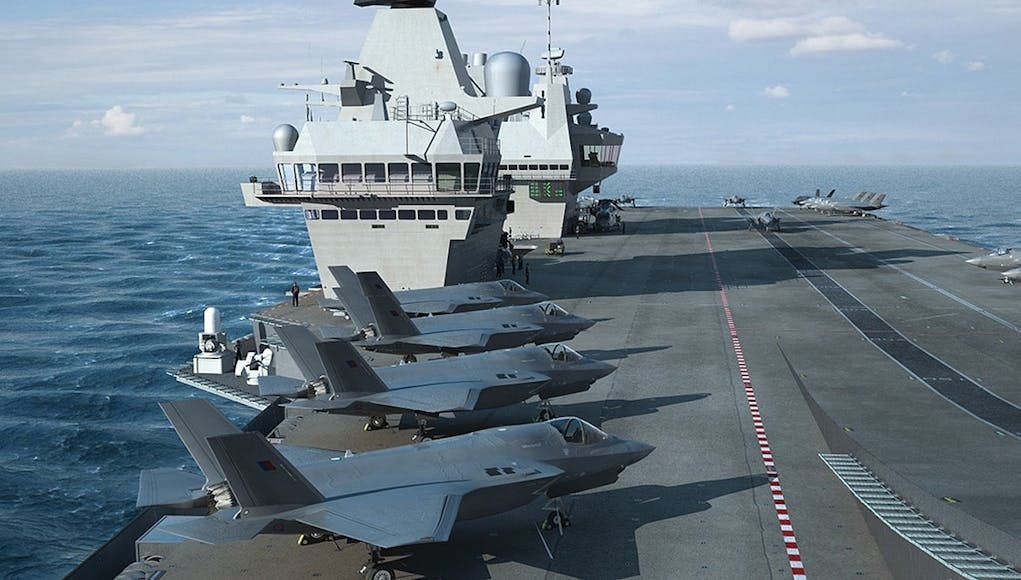 Merlin helicopters were the first aircraft to begin flying from HMS Queen Elizabeth and they will soon be followed by F-35 jets in Autumn next year.

Merlins have already started simple flight activities from the deck of the supercarrier.

“We are fully committed to both the F-35 and the Queen Elizabeth Carrier programmes -both of which are on track to enter initial maritime operating capability in December 2020 as planned.

Events in both the Middle East and Asia appear to be moving apace. So much so, deployment of QE1 can’t come soon enough. The brains at the MOD must be concerned about the carriers run up period, and how effective she could be in the short term. A full complement of F35 by 2023 obviously does not mean, that at least six planes could not deploy on her by early 2018? One other factor, the urgency of her commissioning. Remember Illustrious’s hurried deployment during the Falklands war. Surely, the MOD must have some rapid commissioning plans at the ready? I’ve… Read more »

it is worth noting the ambition being shown concerning naval expansion elsewhere india has taken advantage of a booming economy to quickly upgrade the size and capability to the point where it is 4th largest in the world behind the u.s, russia, and china

The MOD is masking the fact that the U.K. Has only ordered a handful of test aircraft. No substantial order for production aircraft has been made. I’ll be suspicious of any tough talk on the subject until that situation changes.

i still will not accept that we could not have upgraded the design of the harrier more suited to todays needs.the range, speed and payload, allied to carrying a bigger payload, instead, as usual, we fall for the usual american selling techniques and go for an aircraft dreadfully slow to build, expensive and largely unproven. the fact that the u.k had boxed itself into a corner with catapult missing carriers that would have enabled to buy the french rafal or swedish gripen, both cheaper, still 5th generation aircraft,faster to produce we’ll never learn.t.his white elephant has been the death bell… Read more »

Nick,F 35B unit BK 09 our 9th aircraft was delivered last month I believe.

No you are wrong Nick sorry. Annual small batches are being contracted with the aim to have the first 48 by 2024

Late june. I work on the rust bucket lol

Not sure if the numbers are right RAF dam busters squadron is supposed to be developing initial operating ability by June 2018 so I think at least 1 squadron should be good to go by then, fleet air arm squadron stands up at the end of 2018, so that under current forecasts we should have 24 f35b in service towards the end of 2018/ start 2019. The initial operating ability being declared by RAF and fleet airarm is block 2 software and weapons fit so: paveway laser guided bombs, amraam, asraam, gun and rocket pods. followed 12-18 months later by… Read more »

[…] But it will be next year at the earliest before any British F-35s fly from HMS Queen Elizabeth, according to a statement given to the UK Defence Journal earlier this year. […]