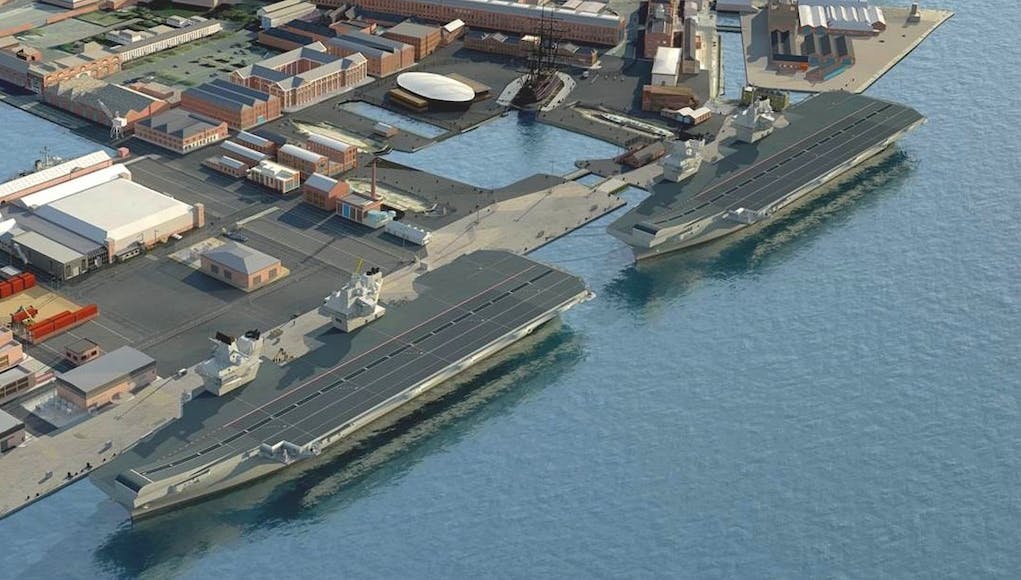 Aircraft carrier HMS Queen Elizabeth will enter Portsmouth on Wednesday the 4th of December at 10:25am.

It’s been a busy three months away for the Portsmouth-based carrier which hosted British F-35 Lightning jets for the first time at sea as part of the WESTLANT19 deployment.

“This has been an extremely successful deployment for HMS Queen Elizabeth. It’s all been about increasing the complexity and tempo of our activity, building the capability of the strike group and testing ourselves in a demanding training environment with our close partners from the US Navy and Marine Corps. Embarking UK F-35B Lightning for the first time and integrating them within the carrier strike group is a significant milestone and we are well set for an equally demanding 2020 and our first operational deployment in 2021.”

“The five-week period of operational tests with UK F-35s was significant and historic. As the last pilot to fly Harrier from the deck of HMS Ark Royal in 2010, it filled me with tremendous pride to see UK fixed wing aircraft operate once more from a British carrier.”

Be quite a sight to see the QE and PoW in port together.

Yup, Im ever hopeful to see them up Scotland way both at the same time as well 🙂

Hopefully NOT in dry dock!

If only the rest of HMNB Portsmouth wasn’t so empty. Hurts the soul to see it

The rest of the fleet is based in Scotland!!!

What will happen when/if Scotland gains their independence ref naval bases/submarine bases,will Scottish service people have to leave our Navy,Army and Airforce (British)will all manufacturers of Ships,Aircraft and Tanks etc move out of the Trossach’s,the mind boggles.

that’s a great picture showing various t23/45 in states of maintenance. PoW’s flight-deck has marks on it already!

I’ve compiled a breakdown of the Google Maps image for anyone who’s interested: Alongside the North Wall L-R: HMS Dragon, HMS Iron Duke, HMS Kent, HMS St Albans. Inside Basin No. 3, HMS Illustrious, HMS Walney and HMC Sentinel can be seen laid up, pending disposal. To the right, top-down: HMS Defender, HMS Dauntless, HMS Lancaster, HMS Westminster. HMS Duncan can be seen in No 15 dock, close to the now decommissioned HMS Quorn, sporting a rather fetching Union Jack painted on the bridge roof. Moving over to Basin No. 2 and the surrounding area, we can see three Hunt-class… Read more »

I feel suitably embarrassed. “I just assumed sir”. That’s my career in ISTAR over! To be fair, I was really looking at the other vessels and don’t zoom in on the carrier. I did think “POW” looked too small next to a type 45 and was surprised I couldn’t see the “P” on the flight deck, plus the flight deck was hardly pristine. School boy error. A million and one other differences I know.

Thanks for pointing it out Lusty and not rubbing it in.

Haha, no worries, Julian. It is indeed an honest mistake to make, particularly if you’re not ‘looking’ if you know what I mean. Doesn’t help that the deck code has been removed.

If you’re interested, you can still see some of the QEC blocks being assembled in the sheds on the Clyde and POW in build at Rosyth, along with HMS Scott in refit.

HMS Ocean appears at both Plymouth and Gibraltar too!

Low tide for Portsmouth Harbour is 10:24 tomorrow. I thought HMS QE needed it to be high tide.

Bit of an odd question here but could they park back to back to make an extra long runway?

No, there’s a platform of maybe 5m at sea level sticking off the stern of each. Any pilot landing over that would have a very bumpy possibly fatal ride

like your thinking. perhaps they could land an a380

The finest medium carriers ever built.

Medium is something of Charles De Gaulle’s or Izumo’s ilk. By any metric, QE are full size fleet carriers

Indeed part of a small group of large carriers I would say, with US ones being perhaps super large one could say. Would be rediculous to claim you need to be around 90 to 100,000 tons to be considered Large methinks. So heavyweight and Super heavyweight for me in reality as ships of that size have ‘potentially’ similar capabilities just more depth the larger it is. Medium with more limited capabilities would be around 40 to 50,000 tons I reckon and below that small, compact or some other denonimation of choice with much greater overall limitations.

I’m just trying to keep in mind that for all our power (and it is great), we are not in the same league as the US. I converted to the Thin Pinstriped Line school, but I worry I went to far that way. I was thinking our carriers were exactly as powerful as those of the US which is ridiculous.

They are designed to be able to ‘sub’ for US carriers, so in theory the capabilities aren’t too far apart. ‘Surge’ sortie rate for a QE is supposedly fairly close to what Nimitz class can achieve in normal conditions, F-35B has a somewhat shorter range than the C variant, and a somewhat reduced payload (due to the compromises imposed by the lift fan), but it’s still pretty good. Possibly the biggest shortcoming is the difference in capability of Hawkeye versus Crowsnest for AEW, but presumably land based AWACS could provide support in many deployment scenarios? Whether a QE, Nimitz or… Read more »

I’m just trying to keep in mind that for all our power (and it is great), we are not in the same league as the US. I converted to the Thin Pinstriped Line school, but I worry I went to far that way. I was thinking our carriers were exactly as powerful as those of the US which is ridiculous.

Only as powerful as the air group they carry.

Even with a better sortie rate they are not in the same league, nor do they need to be.

Will do Helions. Thanks.

Is she bringing the Lightnings home or are they flying back?