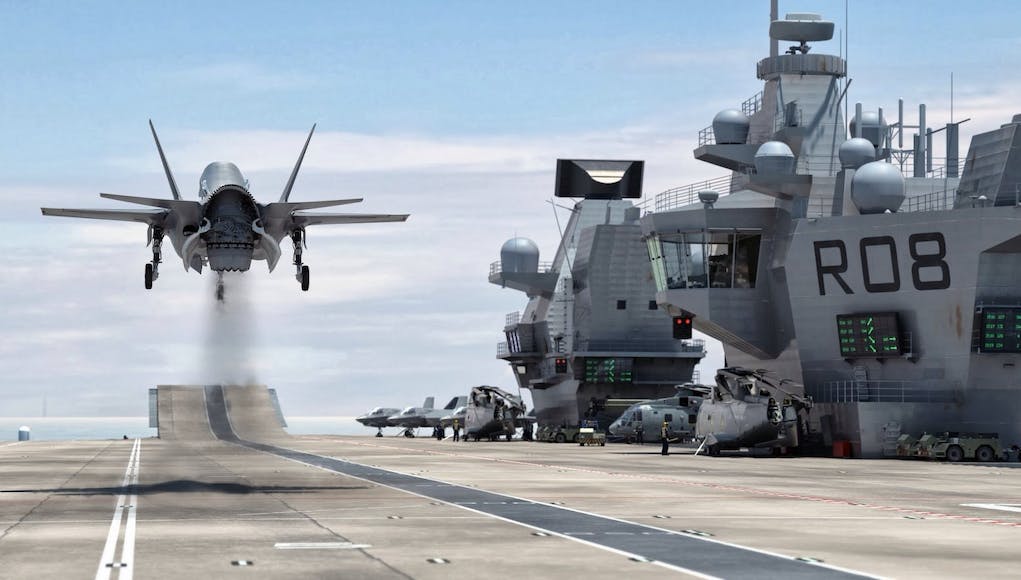 British aircraft carrier HMS Queen Elizabeth is currently preparing to sail to the United States where the first F-35 jets will touch down on her deck in a couple of months.

So after stretching our sea legs we have hit dry land with our legs running, preparing for #westlant18 & #firstdecklanding

It’s going to be hard work, but all worth it to see those #f35 wheels touch down safely on our flight deck for the first time! pic.twitter.com/eG50XIuYYU

He flew the last Harrier to take off from HMS Ark Royal at the end of 2010 before both the jump jet and carrier passed into history. Blackmore called the F-35B “a step change for the UK in how we’re going to conduct business” adding:

“The fact that’s it’s F-35 is pivotal, because you’re in the fifth-generation game now with aircraft, which brings stealth, sensor fusion, advanced weapons and the ability to project aviation and power ashore at your choosing,” he said.

We recently reported that the first jets that will perform F-35 trials on-board HMS Queen Elizabeth will be mostly American owned aircraft but flown by British pilots.

The aircraft that will be landing on the supercarrier will belong to the Joint Operational Test team. The team’s mission is to build confidence in the aircraft towards helping clear the F-35 to make the legally mandated advance from Low Rate Initial Production to Full Rate Production. The RAF’s No 17 (Reserve) Test and Evaluation Squadron comprises ten percent of the test program in the JOTT we understand.

“As the US’s biggest partner in the F-35 programme, we jointly own test jets which are on track to fly off the deck of our new aircraft carrier later this year.

We will continue to work with our American allies on these trials, and plan for the first momentous landing on HMS Queen Elizabeth to be a British pilot.”

Imagine Churchill putting up with this palava just land the bloody thing.

Aircraft carriers in Churchills time had to go though sea and flying trials too, like every aircraft carier ever. Besides even Churchill would want things done properly and safely since its not like a crashed Seafire would leave a hole in the defence budget compared to the one an F 35 would leave.

Also, the number of systems and complexity of today’s carriers is light years away from those of Churchill’s time requiring much longer trial times especially for first of class. Plus, were we in a time of war, I am pretty sure we would cut a few corners to get the carriers into service more quickly but we are not at war, or maybe only in a cold one again, so cutting corners in today’s environment seems like a pretty bad idea to me.

What’s the difference between landing a helicopter on a flight deck and a V/stol aircraft apart from one costing ten times as much as the other.

i wish they’d clarify how many f35b’s we actually have, including the ones at fort worth, kept there for test flying and training.

Just guessing but size and shape of safety clearance zones? Real life demonstration that nothing in the heat and heat wash zones at each designated landing spot will be damaged by the much more intense heat of a landing? Taxiing and parking procedures? Maybe even short rolling landings or are they skipping that for now? And of course what comes down is going to go back up so there’s the takeoff and that’s a whole different ballgame.

Sorry. Bloody comments system. This was supposed to be in reply to Marc’s comment above.

(Chris H) I understand we have 15 F-35s delivered with 3 staying as test and development aircraft in the USA. The rest will, or have, come to RAF Marham in blocks of 4

although the F-35 has been getting a lot of bad press, it is still an amazing piece of kit.

So it bleeding well should be bearing in mind the cost of it.

Monumental PR cock up by MoD if it is a US aircraft to land first. What a signal to send to the public. They do not care about technicalities. They want to see a Brit plane land on this. If we have a UK “orange wired” aircraft why not use one? After, once the photos are taken and the public move on to something else use Donald bloody Duck for all I care. Its all very well saying its only symbolic and the papers will have a field day. But if you let them then yes they will. Is it… Read more »

It does seem rather tone deaf of them.
Their argument of cost for not moving even just one plane from the west coast is ridiculous. It’s a plane it flies and it would only have to be their a day or two just long enough to land and for some pictures to be taken and the media to go home. Just call it a aircraft ferrying exercise or some other drivel to rationalize it to treasurey.

That end part of this article is just a rehash of an article this site ran a month or so back. It doesn’t say (unless I missed it) that the first aircraft to land will not be British. Admittedly it doesn’t say that it will be either, it just says that the aircraft used over the entire period of these trials will be “mostly American owned aircraft but flown by British pilots”. I would be quite surprised if they didn’t make sure that one of the UK-owned orange-wired aircraft was prepared in advance and then kept aside at readiness to… Read more »

Agree Julian. First aircraft simply for the PR for the masses. After that indeed it is not important.

(Chris H) I am reminded of this quote by Terry Goodkind regarding Public Affairs: “Reality is irrelevant; Perception is everything.” If it is too costly to fly an RAF / FAA F-35 from California to the East Coast then why did we fly 4 across the Atlantic and not wait to bring all of the aircraft back in QE? Answer – Images for public perception therefore the same reasoning applies to the flight trials. And if it really is all about cost I am sure we could lease a USMC aircraft for a week and stick some roundels on it… Read more »

i don’t see why this has to take place over the Atlantic surely our air and sea is good enough for any operational training.

Our test F-35’s are part of the testing “pool” in which pilots from US and UK (maybe others?) use all jets, not just their badged ones. I don’t claim to be an expert here but I would imagine more than 4 air-frames will be required to do the actual testing with QE and so it’s just easier for her to go over there (and do work ups on the way for other systems, provide a nice shore leave for her crew) than fly aircraft over here and back again (12 refuels or something I believe it was per aircraft for… Read more »

Who the hell cares.
Good if the first pilot’s a Brit….but not essential.
Please get over the whining, and let Big Lizzie do her job.

When the first RAF/RN F35 lands they should invite all those blabbing about ‘no aircraft’ to see it.