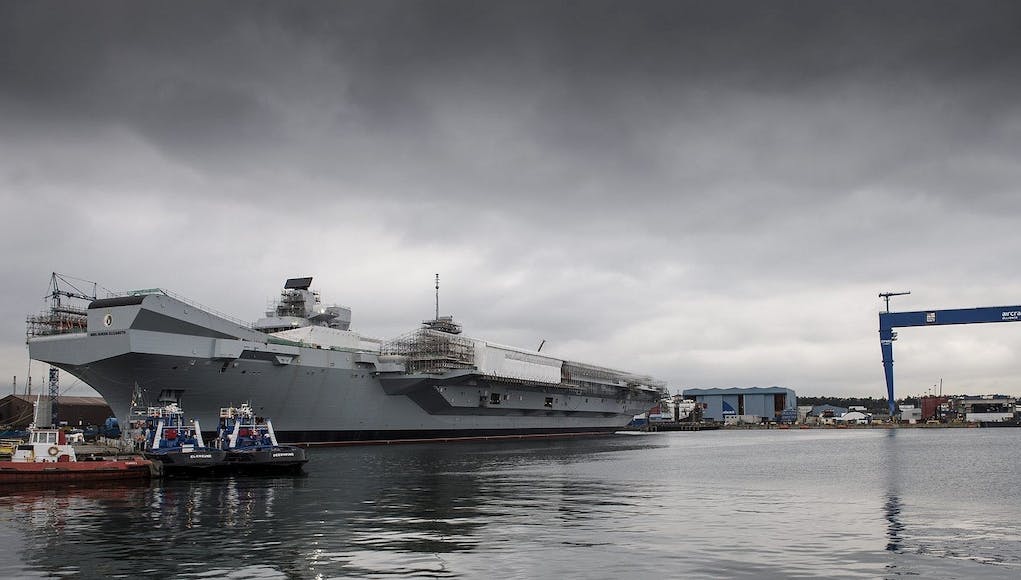 It has emerged that HMS Queen Elizabeth will now sail for sea trials in Summer instead of Spring as previously expected.

The news of the slip started to pick up traction when Former shadow Defence Minister Kevan Jones MP enquired in Parliament about sea trials being moved back from Spring to Summer:

“In the 2015 SDSR and again in December of last year, in the first annual report of the SDSR, the government were very clear that the sea trials for HMS Queen Elizabeth would begin in spring of this year.

In response to a parliamentary question last week, she informed me that they would no longer take place, but would take place in summer of this year. What are the reasons for this, and what is going to be the operational service date for Queen Elizabeth?”

Parliamentary Under Secretary at the Ministry of Defence Harriet Baldwin said:

“I would just like to confirm to him that she will commence her sea trials this Summer, and she will enter into the same programme so that she can sail into Portsmouth later this year.”

“It has always been our intention that Queen Elizabeth should be accepted into the Royal Navy before the end of this year. We are not giving specific dates as to when the sea trials are likely to commence.

The Queen Elizabeth will set out on those sea trials when she is ready to do so.”

Defence Procurement Minister Harriett Baldwin faced the Commons Defence Committee today, she was asked Madeleine Moon what was behind the delay and responded by saying:

“The carrier is due in Portsmouth this year but what I can’t give the committee is the specific days of the week. By the very definition of what you’re going through when you’re going through trials is that you’re potentially in that trial process have to make some corrections to something, that’s the whole point of a trial.”

The minister added that the crew was ready.

“There have been a series of technical issues associated with bringing the vessel to the point where she can commence her sea trials.”

It is understood that this minor delay is ‘not outside the tolerance’ of the programme.

According to Bob Hawkins MBE, First Lieutenant of the aircraft carrier HMS Queen Elizabeth the plan was for the carrier to sail in March, he was quoted here (in mid 2016):

Timing of First Entry Portsmouth (FEP) is dependent upon achieving RFSD and the subsequent success of Power and Propulsion Trials. This initial Contractor Sea Trials period we call euphemistically ‘5-1-5’, i.e. from RFSD, five weeks at sea, one week alongside (Invergordon), five weeks at sea, then FEP: a standard package that must be executed in full from whichever start date we achieve.

Clearly, FEP will shift right if RFSD does, or indeed if ‘5-1-5’ needs to be extended to accommodate any set-backs thrown up during the trials.”

There has been a small slip in the timing of the vessel leaving Rosyth for trials, this really isn’t something to worry about as the vessel remains on track to enter service with the Royal Navy on time.

In such complex engineering projects, this type of occurrence isn’t a cause for concern nor is it unusual. HMS Queen Elizabeth, after all, is essentially a prototype and the Ministry of Defence can’t afford to get it wrong.

I am looking forward to seeing first HMS Queen Elizabeth and later HMS Prince of Wales enter operational service with the Royal Navy, it remains to be seen whether this will give the MoD an excuse to further reduce the size of our surface fleet. I hope we don’t have to wait too long to see the F35Bs on both ships, Trump permitting of course!! Lastly I hope that we continue to utilise both ships and put an end to continuous talk of selling one to France replacing the Charles De Gaulle.

The French got it so wrong with that nuclear powered carrier that needs so much attention. They would gladly buy one of ours if they could afford it. Watch out

Trump has nothing to do with it silly. The F-35 is a UK-US aircraft…

This may be an odd question but will these ships ever have tours available so civilians can just have a taste of what it’s like on board? Obviously certain sections will be off limits but I’m sure places like the mess or flight hanger would be really interesting to visit and just get a sense of the sheer scale of this ship.

Ship Open To Visitors takes place on most RN ships when they’re in ports around the UK. Whether this will happen on QNLZ or not, is unknown

I hope so!!! I would book up straight away!!

Would not it be prudent to have a self defence missile system on the carriers .
Ok I know it has the F35 ECT but sods law says one missile may get through .
TLAM would be good too .Make use of the platform with all we can .
It’s time to stop the cost cutting and build a world beater .
In fact I’d like to see a world beating Navy with triple the ships we have .
This country owes the Navy our existance its time we re built it .

Two carriers operational I will believe it when I see it.

served on carriers in the 60s, cant wait to show my son this one entering portsmouth.

Hi,I log on to your blogs named “HMS Queen Elizabeth sea trials date slips to Summer” daily.Your humoristic style is awesome, keep doing what you’re doing! And you can look our website about proxy list.

No time has been given for the departure today. Please help as I’m not the only person interested in seeing this event.

Is the time of departure top secret !How can I obtain this iN formation?