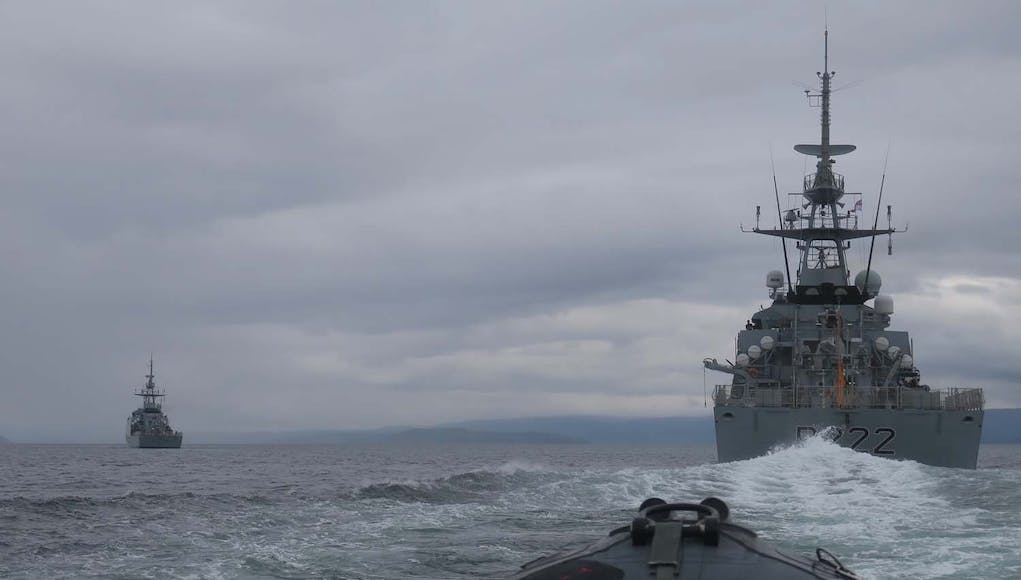 HMS Trent was put through sea trials in the Firth of Clyde, down river from Glasgow where she was built.

The Royal Navy say that Trent’s trials allowed her to test her main engineering systems and sensors – engines, water production, sewage and waste collection, electricity generation, radar and the like – and allows shipwrights to make tweaks and fix any problems once the ship returns to BAE’s yard at Scotstoun.

Five second generation River-class ships have been ordered from BAE Systems on the Clyde.

“HMS Forth is currently in Scotland being assessed by the Navy’s ultimate assessors, the Flag Officer Sea Training organisation. Its job is to ensure a ship and her men and women are in the right material and physical shape to withstand the rigours of a deployment.

Forth is earmarked to sail south to replace HMS Clyde as the Royal Navy’s permanent presence in the Falkland Islands/Britain’s South Atlantic territories (such as South Georgia). And not long after parting company, Forth was sailing in company with another new River-class vessel: HMS Medway as she prepares to make her first appearance in Portsmouth.

Medway is conducting some final trials and training off the Scottish coast, gradually edging her way southwards to her future home, where all the Rivers are based. The new Rivers are designed for duties in home waters (safeguarding UK territory, intelligence gathering and keeping an eye on fishing stocks) and overseas (Falklands, Mediterranean, Far East, Caribbean) as a reassuring presence and upholder of international laws and security.”

About time, is Clyde still going to Brazil? And one OPV should be based at faslane, Scottish waters are huge and need a permanent OPV.

I hope they keep the older fleet in service too permanently. We’ll need them once weve left the EU to protect our waters

The Scottish government have their own boats. No need for a permanent opv.

..although Nicola Sturgeon doesn’t think so. According to the SNP there are no RN units based in Scotland!!

So does England but they have all our warships and RN OPVs, scotland should have Atleast one permenantly RN OPV based in my opinion as Scottish waters are far bigger than England’s and needs more patrolling.

England doesn’t. All the opvs do in uk waters is fishery protection, and the Scottish government have their own fleet just for that. Also what does it matter if all the “warships” excluding of course all our submarines and a great many of our minehunters are based down south. Since Britians defence is conducted from the air with Scotland having both typhoons and soon p8s.

Agree-notwithstanding my dig at Nicola there is an imbalance in terms of assets allocated per hundred miles of coastline. Hopefully the retention of the Batch 1 OPV’s could be employed here.

The Scottish devolved assembly is not a UK sovereign entity.

It is the Parliament of Scotland not an assembly.

Scotland has 3 permanent OPVs of its own which are the same size and capability as the Rivers. It manages its own waters which are not an RN responsibility. https://www2.gov.scot/Topics/marine/Compliance/resources/Vessels

The Rivers are great little ships and if ‘up-armed’ could be a quick and inexpensive way of giving the RN more teeth!

Interesting article on the Save the Royal Navy site regarding upgrading the OPV Batch 2’s- includes 25mm Cannons either side of the Bridge, and Phalanx in lieu of rear crane among other improvements

Was that from a few months back? If so, that article was quite an eye opener into the new upgrades and capabilities of the new Rivers. But I think the bit about phalanx was just a hypothetical scenario, one that’s technically possible but probably not going to happen.

How does the accuracy and firepower of the minigun compare with that of a phalanx? Are they directed by the ships radar?

They are hand-laid. High rate of fire, shorter range.

Thx. So realistically for slow moving targets at a range of less than 1000 yds, RHIBS, FAC etc. Not really much use against an Exocet travelling at 250 yds per second. If there was any spare cash to upgrade the Rivers against missile attack decoys would make more sense.

It should be noted that Forth is in the foreground of the main photo, with Trent to the left. Nice to see them together, and there were some great photos of Forth and Medway operating together too. Spey is now out of the build hall, ready to be launched. Tamar is fitting out and Severn is presumably nearing the end of her refit in Falmouth. The OPV fleet is technically worthy of the ‘growing Royal Navy’ claim if you account for the number of vessels. I would too argue for the retention of Clyde, but I can see why they’d… Read more »

more millions £ down the pan.

Im always in two minds about these ships:

Sensible head says that they are constabulary ships and we should not be adding to the chance they are sent into harms by politicians because there is an easy way to up arm them.

My other head, thinks they would be used as warships anyway because of our lack of escorts, so if we give them the facility to be up armed with Camm in time of war, they could serve a function as pickets and have at least some form of self defence.

I like the picket idea.. A containerised Camm might seem the way to go. Worth noting though that according to wiki a Camm launch cannister is 4.4m in length which makes it a tad taller than 2 20ft containers stacked one above the other.
I suspect the best way to give R2:some AA protection would be to change the 30mm for a 57mm. Keep the crane for launching UUVs and loading containerised UAVs. Keep the minigins to defend against rhibs and embark a Wildcat with Sea Venom and a containerised AShM

Thales have the RapidFire system using the CT40 40mm with airburst ammo and also apparently the ability to include Starstreak in the overall system. If there could be an equivalent of the DS30 Sigma mount developed for the CT40 such that Starttreak and/or LMM could be co-hosted on a non-penetrating mount that would also seem an interesting solution using a cannon about to be widely deployed on Ajax thus hopefully also contributing to volume ammo purchases driving those costs down for the Army too. Also, the RapidFire system can control up to 6 stations so could become a very interesting… Read more »

I think the T31 is the driving project. It’s going to be interesting to see whether the RN chooses to go for a new additional calibre with all the infrastructure costs that would entail. I see the T45s sailing on with the 4.5in for a long time so its difficult to shut down that logistics chain without a firm decision to ‘sunset’ that weapon….which I believe is actually pretty good. It would be expensive to upgrade the T45s to 5in for what for them is a secondary capability. The way the political and economic landscape is evolving I would see… Read more »

its a shame that these big ships and they ARE big ship aren’t designed with a view to the bigger picture, for example, the sigma 10514 built for several navy’s is 10 meters longer is 5 knots faster, needs 20 more crew yet, come fitted with 4x exocet two triple asw torpedo launchers, a 76mm gun, that’s a lot for a vessel that if our rivers were fitted out in the same way, could , given the export success in exports of the river class batch 2 could maybe be a runner for the t31 programme, which, i, like many… Read more »

How severe was the bolt “gluing” on HMS Forth; can only presume that these superglued blots are now replaced?

How difficult can it be. Just a slightly bigger version of shearing off the cylinder head thermostat stud on an MGB….not that I’ve ever done that of course.

Has anyone yet had the go ahead to land a (up to a Merlin sized) helicopter on one of the R2s yet? Any test landings at all?