Have you been curious about how many times the ‘VIP Voyager’ has actually been used to transport the Prime Minister?

The aircraft was refit in 2016 at a cost of £10 million and has been used 25 times for ministerial travel.

“To ask the Secretary of State for Defence, how might flights RAF Voyager was used for ministerial travel in each of the last five years.”

Jeremy Quin, Minister of State at the Ministry of Defence, replied:

“The number of occasions Voyager ZZ336 has been used on Prime Ministerial or Ministerial business since it was converted for its VIP role is given in the table below.”

Voyager ZZ336 use in VIP role

It’s important to note that “ministerial transport” isn’t the only duty of this aircraft. The aircraft is available for refuelling when not in use as a transport, just like the other aircraft in the Voyager fleet.

What is the ‘VIP Voyager’?

In 2016, a £10 million refit of a Voyager jet that involved 58 business seats being fitted with the Ministry of Defence saying that doing so would “allow it to transport sizeable business delegations” was completed. This aircraft is commonly referred to as the ‘VIP Voyager’. 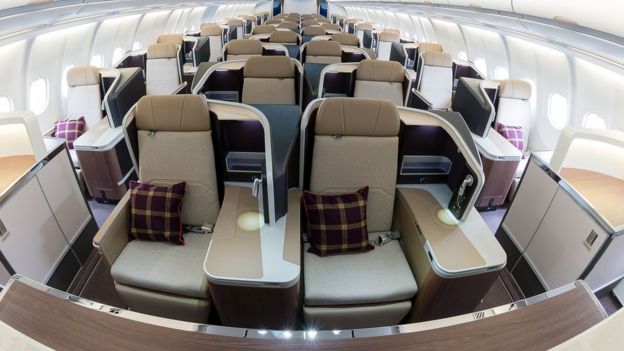 The Voyager aircraft, named ‘Vespina’ (known by its tail code ZZ336), recently completed its latest refurbishment with a new paint job. You can read more about that here.

14 Voyagers leased from the company ‘Air Tanker’ are in the Royal Air Force fleet, nine are in the RAF’s “core” capability and the other five are considered “surge” aircraft and are often leased to airlines when not required. It should be noted that one or two of the surge fleet remain in the Air Tanker livery and are often flown permanently on MoD transport duties to the Falklands, Canada and other locations.

The job of this specific Voyager aircraft, say the MoD, is to provide a secure, cost-effective and suitably profiled transport for Government Ministers and the Royal Family.

It’s important to remember that Ministerial transport isn’t the only duty of this aircraft. The aircraft is available for refuelling when not in use as a transport, just like the other aircraft in the Voyager fleet.

Official flights using either Royal Squadron planes or long haul charter, cost on average £6,700 per flying hour while using a Voyager aircraft costs £2,000 according to the Ministry of Defence.

4 times in a year, what a waste of money. Surely way cheaper to send them on first class seats on a commercial airliner or even cheaper still premium economy.

When COVID is finally over you will probably see regular visits abroad by the Royal Family and leading politicians. We need to butter up a lot of countries post Brexit. It should more than pay for itself.

If that is to get good trade deals, then it is a little late waiting until after Covid, we need to be doing it already we need the deals in place as of 1 Jan or we will have a rough exit.

Hard to do that now when a lot of countries have closed/restricted their borders.

I think end of the year is stupid at this rate. We should extend the transition period by another year, to take into account COVID. I know it was an election pledge but very understandable, and better to do things right than end up with no deal due to sticking to some arbitrary self-imposed deadline!

The idea that a country is going to enter into a trade deal with the UK or accept provisions in one being negotiated that are not to its advantage just because a member of the Windsor Family popped in and danced with the natives is one of those shibboleths that has never been true but for same reason remains a fundamental belief of the British electorate.

Yes of course, surely no one thinks painting a plane or the odd photo op will achieve anything on its own. They are just small parts of a much bigger picture. You can imagine the paint job having a good first impression on certain types though i.e the current US president and perhaps leaders of certain oil rich states in the Gulf. Obliviously what follows that is far more important.

It’s the old adage, ‘Best Foot Forward’ and that’s precisely what this plane is all about. In some ways, it will do what the Royal Yacht use to achieve, shout out the fact, the Brits have arrived!

No I can’t. “Gee, that’s a nifty paint job on that plane I guess we’ll buy some Typhoons instead of F-35s.”

You know full well that isn’t what I implied.

If you’re suggesting that deals aren’t made purely because decision makers are wined and dined – you’ve clearly never worked in business. Because they absolutely are.

And many of the deal we are making are with other royal families.

Like Saudi Arabia? Charles Windsor is going to convince MBS to buy British by charming his socks off? Right.

Not at the head of state/cabinet level they aren’t. False analogy.

My thinking is that Ministers etc, individuals and groups, need to be kept seperate on any delgations, trips, movement as a secure environment should be provided to discuss business, and any other matters, while maintaining security and the option for diversion/retasking. And if its cheaper per hour than commercial long haul, win win in my eyes. Cheers.

Just did a bit of snooping, and okay covid is probably inflating Comercial flight prices but BA is selling First Class flights (looked for sepetember) for about 9-11,000£ per seat. Doing a bit of math for a trade delegation that would amount to 520-630,000£ on seats for the equivilent of a full Vespina. For contrast I amoratised the cost of the 10mil refit over 26 fligths (to get the cost of the next Voyager flight assuming there are no further ones after that), plus the cost of the actual flight using the MoD’s 2,000£ per hour number multiplied by 7… Read more »

I can’t remember the details but, when the Cameron government first announced the refit, the press release did provide similar calculations to the ones you just did Dern. The nay-sayers complaining about the cost of the conversion often so conveniently forget about the costs of commercial flights and whole-plane charters that are saved by having this asset available. I might be wrong but also I think when it’s some big event, G7 meeting, state visit overseas or whatever, the press pack travelling in the economy seats at the back actually have to pay for their tickets don’t they – or… Read more »

But not as secure

A country should have secure transportation for its head of state, ministers, and so on.

This is a cost effective way of doing it, uses an existing asset, which can still carry out its AAR role no matter what colour it is.

People in the U.K. seem to think our leaders should be roughing it, it’s not enough to do their jobs, they should suffer like middle management while doing it.

In reality our people are critical performers and should be given every chance to perform at their absolute best.

And one day an Infantry Platoon might get to be flown back from Kenya, or the Falklands in it….
*Evil smile.*

Mark B
Reply to  Dern

Oh I wouldn’t be at all surprised. It’s a shared resource after all. Good for morale.

I don’t think MPs generally go into politics for the luxury plane trips. Many on both sides of the house could probably afford their own plane!

If you want to be taken seriously in this world you need to dress the part. I assume this was all part of Cameron’s austerity package. Waste of time it’s always twisted – might as well just bring back the royal yacht as well.

Dern
Reply to  Mark B

Mark B
Reply to  Dern

True, we might need to get the politicians to pay to get it back into a fit state …

I completely agree with having a VIP aircraft, but it shouldn’t be a Voyager. Either pull one from surge to use as a dedicated aircraft, or upgrade 32 Sqn to some Global 5000’s or Learjets and use them. We have a dedicated VIP transport squadron, why are we using our limited AAR assets to do the job?

This represents very good value. Certainly not ostentatious for the VIP role with even the livery being more BA than Bahrain. In fact, I’d expect a more delux fit for our extremely VIPs.
And it’s still a tanker, we’re told. 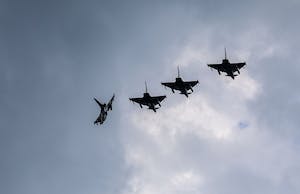