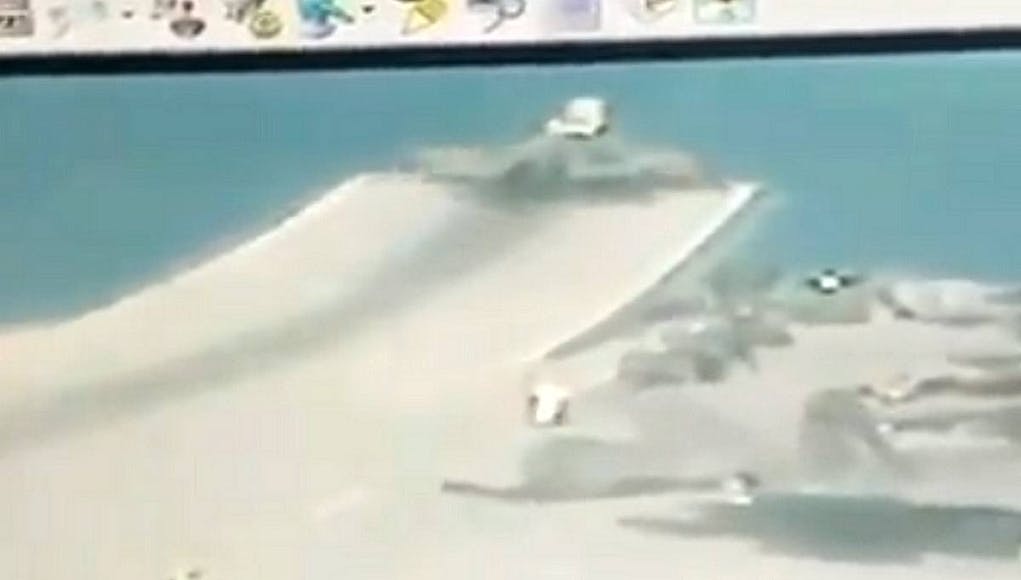 An image has been shared online showing a British F-35B after it was recovered from the seafloor.

Twitter user ‘QE‘, a respected defence commentator, shared the image earlier after finding it elsewhere online. You can follow him here, I’d recommend doing so.

A previous leak, showing the F-35B crash video footage, resulted in a sailor being arrested.

In November last year, a British F-35 from HMS Queen Elizabeth crashed into the Mediterranean Sea, the pilot ejected safely.

The Ministry of Defence said at the time:

“A British F35 pilot from HMS Queen Elizabeth ejected during routine flying operations in the Mediterranean this morning. The pilot has been safely returned to the ship and an investigation has begun, so it would be inappropriate to comment further at this time.”

In December, the Ministry of Defence found the location of the F-35B.

“The pilot was recovered safely and is still undergoing medical checks. We are hopefully that he will be absolutely fine. It would be premature of me to comment on the reasons for the accident. The recovery of the flight data recorder and the wreckage are really vital for an accurate investigation to determine the causes of the crash. Clearly the swift recovery of the aircraft is what we would like to do and we are working closely with allies on the mechanics of that. We haven’t got the plane up yet. We are aware of Russian undersea capabilities, and you are quite right to identify them as being state of the art. The kinds of precautions and operations that we are undertaking at the moment are designed at least in part to ensure that the technology of the F-35B remains as confidential as you would like it to be. Those security aspects are very much at the top of our mind. My understanding is that the experts know where the aircraft is.”

Britain and America then engaged in operations to salvage the F-35B which ditched into the ocean after taking off from HMS Queen Elizabeth. The salvage was successful.

What caused the crash?

You should put it in rice as well

They’ll need a big bag of rice for this one!

Just a hint if anyone’s interested I know a bloke who can fix that. Paddy the Greek he’s a gem if you need new alloys for a beamer but keep it to yourselves. Cash only mind.

I know a hard working East European guy who works wonders with Ladas and Zils Im sure he could put this back together in no time and find a buyer. Got a place in Kensington Palace Gardens I believe.

Paddys got a lock up in Hull so fewer overheads.

Doesn’t look that bad all things considered. I doubt it will ever fly but will make a useful training aid or gate guard if nothing else.

Perhaps send it to Hendon- they only have a plastic one at the moment.

Possibly. Although they may need to keep it on miltary grounds for security reasons. So no one can get any detailed up close photos.

Is it actually confirmed that is the same airframe there’s a serial number on rear stabilizer.

And it’s one of the newer airframes

Thanks guys. I wonder how much if it can be cleaned and parts be reconditioned to use for spares. Salt water is very corrosive and if left for to long it could be rendered a right off. I’m sure the majority of the engine will be trashed as it was the reason for the crash (speculation only), but electronics auxiliary systems may be salvageable. I doubt the official report into the accident will be kept secret as it should, as it seems the official secrets act is like a colander with all the leaks of late.

Nothing from this aircraft will be re-used. No aircraft using parts from it would pass MAA. Any senior officer signing off on it would be personally liable.

Only chance of it remaining in RAF ‘service’ is in Cosford or Marham for maintenance crews to use for training. Other than that it gets tripped and goes to Hendon.

Some pretty bad opsec on board. Was gobsmacked the video got leaked and now this.

Pretty sure that this leak will be from a different source – that looks like a salvage vessel. I think the carrier was off station before it was recovered.

From a salvage vessel, likely a civilian.
The guy who actually posted the pic up (not QE, and not on twitter) deleted it pretty fast however…but by then it was too late.

Can anyone take a guess at where the picture was taken from? The windscreen wipers are a clue, I suppose. Would it be from a helo, or maybe from the Flyco bridge?

That won’t be the carrier, it’ll be a salvage vessel and presumably that’s the crane operator’s cabin.

I have 10 bob on defective maintenance

Rain cover was left in the intake., I believe.

It does seem remarkably intact, but perhaps that not surprising considering it just ‘plopped’ into the water….

Its a good job the engine cover was still on, or the engine would have got wet. Shame the pilot panicked and ejected or the cabin would be dry too

LOL. Its been deleted.

It was by the person who uploaded it this morning as well, very quickly…

It was uploaded onto a blog apparently, Do you know which one?

The salvage vessel was apparently Italian so if it was taken by an Italian crew member can QE (Twitter poster) get in deep doo-doo for it?

It was someones photo website, saw it earlier but then it got wiped. It is available on other forums though…no secret stuff on view just the underside of an aircraft…

Think QE deleted it because of the reaction from some other users about posting it, there’s a bit of sensitivity since the leak of the F-35 crash.

Pretty much. I wasn’t the first to post it, far from it in fact. The comments turned into a cesspit so deleting it was necessary for everyone’s sanity I felt 🙂

Yes I remember there was some throbber saying it could reveal secrets….like the underside of an F-35 has never been photographed in detail before….all you’d need to do is go to any number of airfields around the world, including Marham, and wait with a camera on the approach and you’d get better, more usable pics….

I agree not worth the hassle…

I noticed that the UK MoD thank you note named Italians first and then the USA second. That usually is not done lightly.

“Operations to recover the UK F-35 jet in the Mediterranean Sea have successfully concluded,” the ministry said. “We extend our thanks to our NATO allies Italy and the United States of America for their support during the recovery operation.”

Certainly the Italians have an historical reputation for underwater work recover.

Richard B
Reply to  Geoffi

A bit late, the stable door was closed after the horse had bolted. You have to look no further than the Daily Mail and Daily Telegraph websites to see the photo.

Last edited 2 months ago by Richard B
Reply

This is not good. Russians and Chinese might be able to glean useful information from a picture that to you and me looks like a damaged aircraft.

They’ve been looking to produce a version of the F35 for some time and every little bit of information gleaned helps their cause!

Espionage is about collecting small packs of info to build a full picture. The picture may not look much but gives adversaries another part of the jigsaw. It also tells them phones were allowed on the salvage vessel and crew were dumb enough to take photos , so could be worth targeting the salvage company with a hack get the crew detail then target there phones, email accounts etc to see what else you can glean.

Having the plans to anything is one thing trying to recreate it is another, the Chinese would have the best jet engines in the world if that was the case

You could get a better picture of the undersides of an F-35 by standing in a field near Marham….

Could we please have just one part of this ridiculous fiasco that is NOT LEAKED.

seems the tweets been deleted, and I can understand why.

I do not agree in the reproduction of leaked material here or in any other publication. You should not show these images it only encourages the unscrupulous to make unauthorised disclosures in the future.

I suggest you remove this article.

I should think one of the reasons for deleting the image so quickly is it gives a good glimpse into the bays, possibly revealing more than the powers that be would like…

She does look very intact, I dare say LM will want it back to study the effects of a dunking on the airframe, in a careful take apart study, it might reveal material issues they weren’t aware of.

The weapons bays are well documented.

Afternoon ETH, the weapons bays are, but you can guarantee they will be Photoshop adjusted.

This image clearly shows the bays, undercarriage bays and a panel missing from the underside of the wing, who knows what foreign scientists can gather from glimpses of wing structure etc?

How the IWBs look is not classified by any means. They even fly at air shows with the bays open to show them off. The panel on the wing is for the stabiliser as part of the STOVL element, also not classified. I’ve spoken to those who work on the F35 that confirmed to me there’s nothing sensitive here that hasn’t already been shown by LM themselves.

Especially as one of the tweets I saw on media are in Chinese characters, they will be all over this by now, probably have a very good 3D model

Very fortunate that the aircraft wasn’t ultimately salvaged by an “unfriendly power”. The loss of the aircraft was one thing, but handing over a largely intact airframe plus systems, software etc to enquiring minds would have been disasterous. What happens next – I assume UK/US commissioned the salvage operation?

Another leak, really! If at first you fail keep doing it. Seems to be the motto of whoever oversaw this entire debacle. Leaking carriers, leaking sailors now this. Its like Dominic Cummings has access to everything.

Block any Posts that are detrimental too the security of the Armed Forces ,and deal swiftly and heavily with the idiots getting their Warholes 15mins of Fame

Don’t we know that it was some kind of engine cover left on that meant the pilot was forced to eject?