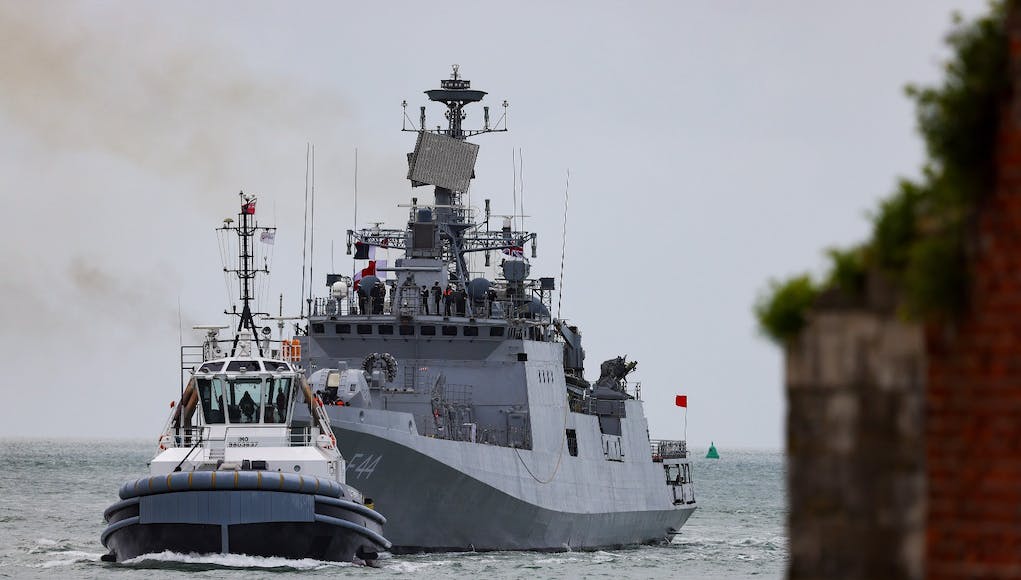 Indian frigate INS Tabar has arrived in the UK ahead of exercises with the Royal Navy.

INS Tabar is a Talwar class frigate and was designed and built by Russia for the Indian Navy, the warship entered service in 2004.

“While in Portsmouth, members of the 300-strong ship’s company will pay their respects to World War 1 and 2 fallen, immortalised on the Naval Memorial on Southsea Common. Before their country’s independence in 1947, Indians served with distinction in all theatres of war: at its peak in WW2, the then Royal Indian Navy counted 20,000 personnel.

And on Sunday the Tabar – as with Indians around the globe – will celebrate the 75th year of their country’s independence from the British Empire. The frigate will ‘dress ship’ – flying a colourful assortment of flags from bow to stern – and is due to hold a reception for dignitaries, led by India’s High Commissioner to the UK, Gaitri Issar Kumar.”

“I am delighted to be visiting INS Tabar while she is alongside in Portsmouth, and grateful for the opportunity to meet with the High Commissioner. The Royal Navy enjoys a mutually-beneficial relationship with our Indian colleagues, and one which runs deep and is highly valued. Recent engagement – encompassing ten ships and two submarines in the Bay of Bengal is a fantastic example of the level of cooperation between our two nations at sea.”

Back in 2008, the vessel was fired upon by a pirate vessel and subsequently destroyed it. Indian naval spokesman, Commander Nirad Sinha, said at the time that “INS Tabar encountered a pirate vessel south west of Oman with two speedboats in tow. This vessel was similar in description to the ‘mother vessel’ mentioned in various piracy bulletins. INS Tabar closed in on the vessel and asked her to stop for investigation. Pirates were seen roaming on the upper deck of the vessel with guns and rocket propelled grenade launchers. The vessel continued threatening calls and subsequently fired upon INS Tabar.”

Will be interesting to hear the Guadian/Observers view of a Country/navy sending its vessels out of its natural sphere of influence though in reality it’s only Britain doing so that aggravates it’s innate angst. Fact is this is a very welcome sign of cooperation beneficial to both. In truth just because ones trading partners are predominantly in Europe as those papers short sightedly like to pointedly state, we are all increasingly reliant on events in South East Asia where like it or not, any serious disruption (or worse) will seriously effect and potentially far worse all trade in Europe and… Read more »

Why are you reading the Guardian ?

Hi Geoff I think warships generally fly the national flag of the country they are visiting rather than the countries naval ensign (the rules may differ between navies of course) but I remember sometimes hoisting various national flags during my time on the signal deck entering harbour.
The USS Winston Churchill has it’s links to the Royal Navy and is the only ship in the US Fleet to fly the White Ensign.

Thanks for info Springer. Many nations use the national flag as ensigns as well. I think though that foreign merchant vessels in British ports are generally expected to fly the Red ensign as a courtesy flag. i thought this might apply to the White ensign but it appears not to be the case. Cheers from durban

Love that DDG-81 flies the White Ensign and the Stars & Stripes together whilst underway and in action. The RN & USN- perfect together.

Ones that need glasses?

You do have to wonder don’t you!? It happened quite regularly in the mid to late 2000s with incidences of Somali pirates attacking a German auxiliary, a Dutch frigate and on one occasion in 2006 a pirate fishing boat towing two smaller skiffs thought it was a good idea to attack two US destroyers at the same time after the destroyers sent out a boarding party to investigate. Unsurprisingly that encounter didn’t end well for the pirates. There are also stories of the Russians dealing with the pirates with extreme prejudice… On one occasion they cast a pirate crew adrift… Read more »

I found myself working at the fleet review in Portsmouth in 2005 and when we had some free time, we visited a number of ships, I visited both the Indian and Pakistani ships and tired my luck in trying to cadge some curry,,,no luck. But despite coming from an Indian background I found it very disconcerting how they all smile and nod their heads. what is that all about.

Morning Farouk. maybe some of them can’t speak English?

It’s polite/ being agreeable. May not have understood a word you said, or may of thought you were an officer or someone like that or the simple, if I nod and smile enough this man will go away and stop asking me for curry!

Mate, I work with loads of Indian lads. If their English is poor( but still way better than my Hindi, Nepali and Urdu among other dialects!) they do a lot of nodding and head shaking. My Foremen and Supervisor who speak very good English tend not to do it. I also have to make a conscious effort to slow down my speech and not to use English slang and idioms. That said we do tend to use the same team members on projects so now my colourful use of the English language has rubbed off on them as well. Listening… Read more »