The former head of the Royal Navy has claimed that the decision to invade Iraq was made before Tony Blair announced it and “they were looking for a reason”.

“Of course Blair and everyone else will say, ‘No, we didn’t make the decision until right up to it’. You can always say that, can’t you? But I would not have told the fleets, the Royal Navy and the Marines, to be ready for war in the northern Gulf by the end of the year. I would not have sailed the Mine Counter-measures Force for the Middle East so they were in place for operations.

You don’t wake up in the morning and think that. Some b*****d told me to do it. That’s why I did it. All the people involved say, ‘We hadn’t made our decision right up until the UN resolution’, and all these other things. Well, you can argue that you never make the final decision till you make your decision. But, actually, they’d bloody decided. That’s the reality.”

“I think there had been a decision that we were going to invade Iraq, that that was going to happen, but they were looking for a reason to actually do it.”

Operation Telic, the codename under which all of the United Kingdom’s military operations in Iraq were conducted, began at the start of the Invasion of Iraq on the 19th of March 2003. 46,000 troops were deployed at the onset of the invasion and the total cost of war stood at £9.24 billion in 2010.

A total of 179 British Armed Forces personnel died serving on Operation Telic between the start of the campaign in March 2003 and the end of operations in July 2009; 136 in hostile incidents and the remaining 43 under non-hostile circumstances.

Full non-fatal casualty records are currently only available for the period after 1 January 2006. From that date, 3,598 British personnel were wounded, injured or fell ill; 1,971 of whom required aeromedical evacuation.

However, these totals are likely to rise significantly as and when full records for 2003 to 2006 become available. By March 2007, more than 2,100 soldiers had returned from Iraq suffering from some form of mental illness, including PTSD.

Of course it was they (high ranked officers from here and abroad) were having meetings in training rooms in cranwell way before anything happened….and the satellite bandwith got bought up 12-24 months before the event.

To be fair he said “I think there had been a decision that we were going to invade Iraq”….’Think’.

A bit of a difference to ‘Iraq invasion planned before Tony Blair told public’.

Of course it was its part of military planning to have a plan against any potential agressor. I dare say there is one for russia and china and iran and a variety of other nations

What would Saddam`s regime look like today in context of Iran,Norht Korea`s technological development? Just a quick remainder.Iran -Iraq war 1982-88,the death toll, overall, was an estimated 1 million for Iran and 250,000-500,000 for Iraq.The genocide of Iraqi Kurds. Iraq invaded Kuwait in 1990,at cetera.Dilemmas.Could we have stopped Hitler in 1936,for example?

Today Sadam would possibly be dead as he would be pushing 80.
Uday Hussein might well have been ruler today.

I’m sure everything would be okey-dokey!

Was this before or after Bush had arranged for the demolition of the three skyscrapers?

Remember during the Cold War when we all talked about TTW (Transition To War); that there would be no sudden attack, there would always be a period of build up before war. It’s a well known concept of military science. I’d be more surprised to hear that Admiral West had sat with his feet up twiddling his fingers! Of course a period of TTW, the positioning of resources, makes the outcome of war more likely but does not make it inevitable. The final political decision may be a last minute one (usually is). Blair may, indeed, not be innocent but… Read more »

No! Really? I’m shocked I tell you, shocked. 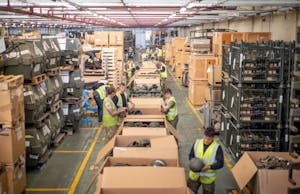