Irish Naval Service patrol ship Samuel Beckett has rescued more than 100 migrants off the Libyan coast today. It is the second humanitarian rescue for the vessel, which took over from the Niamh at the start of the month.

The Samuel Beckett is an offshore patrol vessel, constructed by Babcock Marine in the UK.

While most missions undertaken by the Irish Naval Service are in Irish waters, on occasion longer missions are undertaken in support of Irish Peacekeepers serving with the United Nations, representing Ireland, or in support of Irish trade missions. In 2002, LÉ Niamh delivered supplies to Irish troops in Eritrea, then continued on a trade promotional tour to India, Malaysia, Singapore, Hong Kong, China, Korea, and Japan, becoming the first Irish naval vessel to cross the Equator.

In May this year another Irisih vessel, LÉ Eithne, departed Cork en route to the Mediterranean to participate in the Service’s first overseas humanitarian mission. Eithne rescued 637 migrants within a week of her arrival in the Mediterranean. 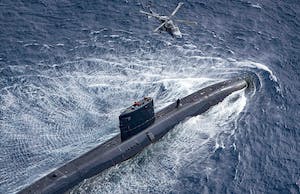