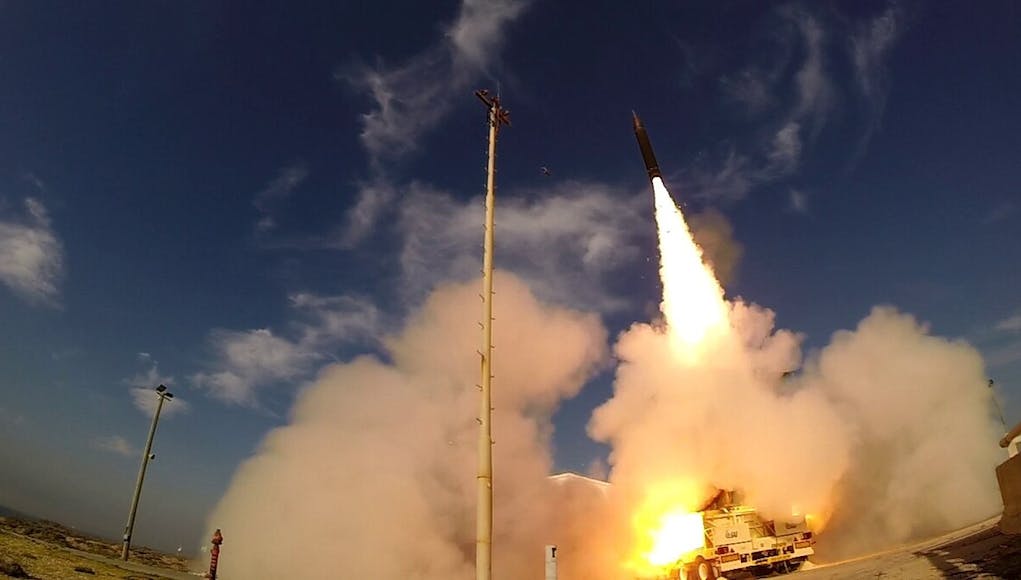 These tests were conducted at Pacific Spaceport Complex-Alaska (PSCA) in Kodiak, Alaska.

“The Arrow-3 Interceptor successfully demonstrated an engagement capability against the exo-atmospheric target during the test. Although not part of the Israeli architecture, a U.S. AN-TPY2 radar participated in the test. Preliminary analysis indicates that test objectives were successfully achieved.

“This unique success in Alaska provides confidence in future Israeli capabilities to defeat the developing threats in the region. My congratulations to the Israel Missile Defense Organization, our MDA team, and our industry partners. We are committed to assisting the Government of Israel in upgrading its national missile defense capability to defend the State of Israel from emerging threats.”

“Ten challenging years of development have culminated in this moment: the Arrow 3 weapon system completed a test campaign, during which an Arrow 3 interceptor completed full interception of the target. This is an extraordinary operational and technological achievement for the State of Israel, made possible by thousands of employees, engineers and officers from the Ministry of Defense, Israeli defense Industries, Israeli Air Force and our US partners.

In addition, the fact that the tests were conducted in Alaska, tens of thousands of kilometers away from Israel, is another significant achievement that demonstrates the operational capabilities of the Arrow 3 system to successfully face any threat.”

That’s fine, but ballistic missile defense takes a second chair to the good old fashioned basics of countering THIS sort of thing. Skills VERY rusty since the Cold War I’m sure.

Hmm, not so sure. A recent picture of the launch ceremony shows it fitted with a propeller. I’m sure they were developing a pump jet for the Lada class, but that had major flaws so was cancelled. I believe pump jets are significantly quieter at similar speeds than a propeller?

a pump propulsor is significantly quieter than a propeller. its not just the propeller/propulsor noise that is the issue – with an SSN it is all the internal pumps and cooling machinery associated with managing the reactor cooling system. An SSK on battery/electric motor generates less machinery noise – in theory a very slow turning propeller can be extremely quiet at a fixed speed but you dont get the speed range and rate of change of speed like you can with a propulsor whilst still controlling cavitation – either way, however quiet it is, a well trained Astute, Trafalgar or… Read more »

Surely with so many countries developing ballistic missiles it would be reckless to not to pursue a defense? Not sure either area should play second chair to anything?

The only BMD I’m aware of are our t45 DDGs & that’s questionable. With only 6 & several deployed elsewhere we’re way behind the curve when other poorer nations have several capable systems deployed for national defence. The risk is much higher today & incresing rapidly.

Could be the usual telegraph like most english papers being melodramatic I dont think the kilo class is a scratch on our subs I would say.

I hope your right, but I suspect we’d be caught out by our own propaganda like we were by the real abilities of the derided Japanese in WW2 whose Zero fighters wiped the skies for some time & their long lance torpedoes were devastatingly superior to allied torpedoes. The technological lead the west had in the cold war is now much slimmer & Russia/China seem clearly well ahead in many areas. They have supersonic & hypersonic anti ship missiles deployed where we’re still taking an age to develop our next generation ASMs while relying on very dated/obsolescent Harpoons. Their SAMs… Read more »

Arrow 3 is the next step up from THAAD. It can attack missiles in the boost phase as well, but its primary role is to attack missiles when the enter orbit. ICBMs during this phase are usually not conducting evasive manoeuvres, so theoretically are easier to track and attack compared to when they deploy their MIRVs or during re-entry. They haven’t reported on the success rate of interceptions, but Israel have fielded the missile now so they must be confident in its performance. I know they have had a lot of help from the US, but surely we have the… Read more »

We have the ability, we just need the money.

The way we spend a fortune & take forever to develop new systems we’d perobably be better to buy the Israeli Arrow. You can’t fight a war with a “wish list” of systems you’re developing at a glacial meader.