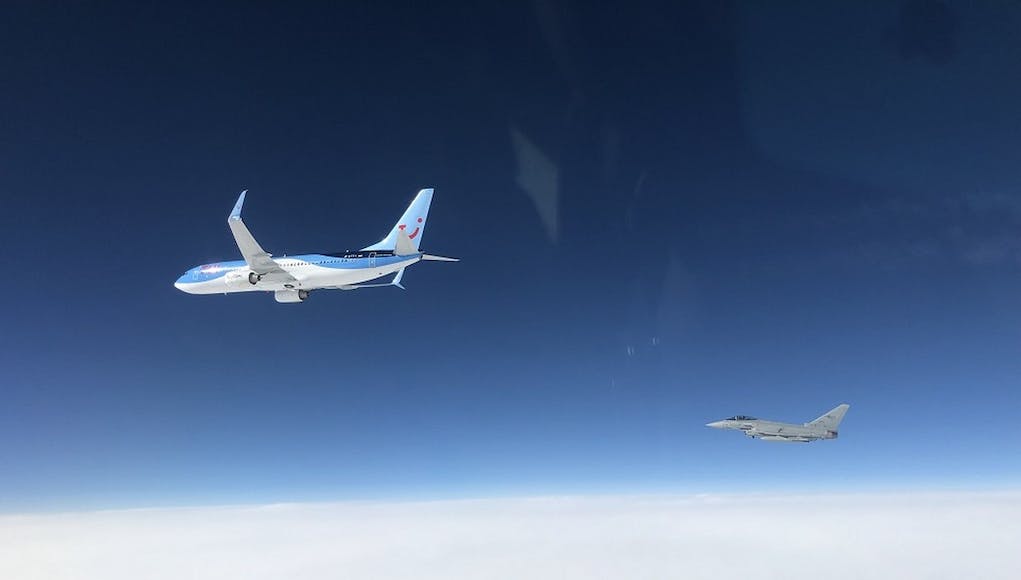 Share
Facebook
Twitter
Pinterest
WhatsApp
Email
Italian Air Force Eurofighter aircraft were launched for the first time to execute a NATO Air Policing mission over Montenegro.
In the morning of the 9th of April 2019 an Italian Air Force Eurofighter based at Gioia del Colle Air Base some 20 km south of Bari, Italy, was launched by NATO’s Combined Air Operations Centre at Torrejon, Spain.
According to a release, the mission was to intercept a civilian airliner that lost communications with civilian air traffic control over Croatia and was heading south towards Montenegro and Albania.
Eurofighter aircraft who are on alert to protect NATO airspace over Italy, Albania and Montenegro under the auspices of the Alliance, successfully intercepted the aircraft only a few minutes later.
The Eurofighter pilots a visual check of the aircraft to rule out illegal action, technical or any other issues.
It was established that the loss of communications was related to a misunderstanding between civilian air traffic control and the airliner crew. After resuming regular contact with the civilian controllers, the airliner continued to proceed to its destination to Hurghada, Egypt.
0 0 vote
Article Rating

First time? I guess Russian aircraft will have problems reaching the periphery of that airspace, and I don’t think intercept of stray airliners is that common?

The RAF are veterans by comparison.

Surely that can not be a picture from the incident as those death traps are grounded at the moment (they should be grounded permanently).

Hi Lee. Look at the winglets, the Max has a split winglet, that one isn’t. I expect it is a NG model, which is rather safer!

Look at the right wing.

Oh yes!, well spotted. I wonder if that type of winglet is available as a retrofit? Either it is or that is an old photo.

This is the split scimitar winglet used on some 737NG. The Max has a bigger split called the AT Winglet. The MAX has the LEAP engines with the toothed nacelle.

Forgetting the fact that since the 80s the A320 has had a HIGHER accident rate. What caused these accidents was in the end pilot and maintenance error. In Indonesia they failed to maintain the system so it failed. In Ethiopia the pilot repeatedly attempted to turn on a system he KNEW was malfunctioning while at the same time he manually increased speed repeatedly beyond the design limits of the jet. He the compounded his error by attempting to put the aircraft on autopilot. This whole controversy is the result of Ethiopia covering it’s ass for putting a pilot with what… Read more »

Yet Boeing have admitted that their software is at fault and that when they discovered the issue in said software they did not notify ‘all’ users to a satisfactory level.

“In Indonesia they failed to maintain the system so it failed.” I’m no expert, but I think you’ll find that a large part of the problem was that they didn’t know the damn system was there in the first place – it wasn’t in the manual. So I don’t see how you think that they didn’t maintain it properly. “In Ethiopia the pilot repeatedly attempted to turn on a system he KNEW was malfunctioning while at the same time he manually increased speed repeatedly beyond the design limits of the jet. He the compounded his error by attempting to put… Read more »

Nope. You totally misunderstand the issues. The 737 family does indeed have a good safety record. The 737 Max should not really be classed as a standard 737 as it is vastly different and in a very bad way. The engines are much larger (for efficiency) and do not fit under the wings properly (Making the undercarriage longer would need a large redesign of the aircraft). So to fix this they moved the engines forward quite significantly. This means the leverage when on full thrust is much greater and pitches the nose up dramatically. Add to that the lift effect… Read more »

That’s a great post Lee1, Thanks for taking the trouble to explain.

it’s been a Terrible time for so many poor people, I hope they can fix It soon.

The only way to fix it properly is to redesign the aircraft… They will however not do that due to cost so people will be flying in potentially dangerous aircraft albeit a slightly less dangerous one than before… It is also now apparent that the 787 has manufacturing issues too… One airline found a pair of ladders left inside the tail unit! Many others have found sharp metal next to electrical wires and metal shavings left in the aircraft. Also the tankers they have been building have been delivered with tools left inside the fuselage… (How does that even happen!)… Read more »

Try doing some research before making a statement like that based on TV news reports. The latest info from the crashes are saying that the pilots did not follow the proper procedure during the system malfunction that would have averted the crash. That’s why I never fly those 3rd world airlines. The pilots just don’t have the training they need. Doesn’t matter how many flight hours they might have if their training is lacking it makes no difference.

Please post the evidence for that. It seems Boeing disagree with you as they admitted that the system kept turning itself back on and have put in a fix specifically to sort that issue.

It’s a 737-8NG (next gen). First flew 21 March 2011 for Thomson before changing owners twice (leasor) but staying with Tui.
If it had been an RAF plane we could have had fun with the Tui slogan, but as it is, it is not a Typhoon.

Lee1
Reply to  The Big Man

The NG does not have split Winglets.

The Big Man
Reply to  Lee1

That is the actual plane according to flightradar24. So under normal circumstances that would be correct, but the plane registration and transponder state an 8NG.
Possibly retro fitted. Also the engines nacelles don’t look like a Max. In any case all the Max’s are and were at the time grounded.

BTW. The picture is the actual incident and not a library shot.