The OCEAN2020 project, managed by a 42 partner consortium from 15 EU countries, has successfully launched its first maritime demonstration in the Gulf of Taranto, Italy.

“The deployment of manned and unmanned systems, when integrated with satellite and communication networks, aims to enhance overall maritime situational awareness and build a comprehensive picture of developing situations for military decision-makers.”

“Today Ocean 2020 is demonstrating its technical achievements, but also that joint research and development at the EU level works. With the preparatory action on defence research we started small. But it helped us to gain valuable experience for the fully-fledged European Defence Fund in place in 2021 to further strengthen the competitiveness of our defence industries.”

According to a news brief:

The two-day live demonstration is the latest phase in the ambitious project which aims to demonstrate enhanced situational awareness in a maritime environment through the integration of legacy and new technologies for unmanned systems.  OCEAN2020 aims to achieve operational and technical objectives, these range from enhanced situational awareness, autonomy, cost effectiveness and increased interoperability for joint missions also using protocols compatible with NATO standards. The variety of assets involved in OCEAN2020 highlights how collaborative autonomy between multi-domain unmanned vehicles can provide a force multiplier.”

“OCEAN2020 is an incredibly ambitious project. To deliver it, we are bringing together a pan-European team of experts, each of which is contributing its own area of world-class capabilities. Operationally, this project is important demonstrating the possibility to enhance maritime surveillance – of vital interest to European defence – integrating unmanned platforms with traditional systems.

More broadly, OCEAN2020 demonstrates the potential and the true spirit of  European collaboration in the defence sector, having enabled a real partnership of large and small industry, academia and defence ministries from across the continent.” 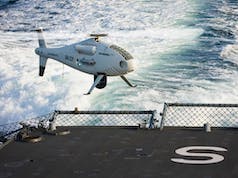 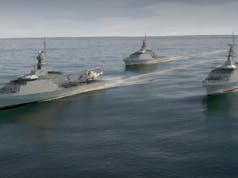 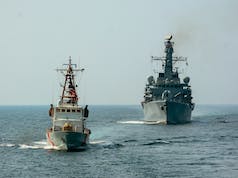 The UK has to up its game on the UAV front particularly for the RN. Maybe stuff is happening in secret or I missed stuff (or perhaps have only been registering the disappointing stuff) but the last news I remember on RN UAV activities was the MoD cancelling further funding for the ScanEagle test project a few years ago. It actually makes me sad to see articles like this on UAV stuff when it’s not the UK/RN involved because it reminds me of how little the UK seems to be doing, at least publicly. This article even has a Schiebel… Read more »

Actually, we are still in the EU as of today! Are we one of the 15 countries involved? Perhaps my rant above was premature but even if we are one of the 15 we still need to turn research into actually procuring stuff.

Thanks Dean. Interesting and good stuff but I was careful in my rant to specifically refer to UAV. If I’ve found links to the right project (e.g. https://www.thalesgroup.com/en/united-kingdom/news/royal-navy-meets-autonomous-boat-apollo) that is strictly USV which I was aware of. I’ve been following the MCM stuff with some interest, mainly in the hope that whatever mothership is chosen when Hunt/Sandown replacement happens might have more multi-role flexibility. The Hunts & Sandowns seem to sometimes get pushed into roles that they are not really fully equipped to perform, stuff like Gulf escorting being a case in point. Something like a Venari 85 equipped with… Read more »

In October 2018 the RAN stood up 822X Squadron in the Fleet Air Arm to operate UAVs out of Nowra. The Squadron will operate the Insitu ScanEagle and the Schiebel S-100 Camcopter. The Scheibel S-100 UAV will be the primary air asset operated from the 12 new Arafura Class OPVs under construction for the RAN. Like the Rivers they have a flight deck with no hangar but are capable of operating the S-100s out of containers on the flight deck. This will greatly extend the ISR horizon for the RANs OPVs and be an effective fleet multiplier allowing them to… Read more »

Yup. The RAN are doing really good things and there’s also some interesting indigenous Australian technology too e.g. Sentient Vision’s ViDAR (http://www.sentientvision.com/products/vidar-2-2/) which you probably know of but link added for others. The RN could learn a lot of lessons from the RAN in this small ship-launched UAV area. What the RAN are doing with containerised S-100 on the Arafura Class (which I didn’t know about – thanks for that) is exactly my wish for the River Batch 2. From the look of the Arafura Class the River B2 is if anything a better match since it has that designed-in… Read more »

A recent interview by the RAN Chief of Navy, Mike Noonan with Australia Defence Magazine (ADM) gives some insight into the importance the RAN attaches to developing UAV capabilities: ADM: What type of UAS capability is being sought under Sea 129/5 (rotary and/or fixed wing)? What will the acquisition methodology be (agile/smart buyer)? Noonan: “Sea 129 Phase 5 is a really important way of understanding what the emerging UAS technologies are and how we will incorporate them into our Navy. I think it would be fair to say that we don’t have all answers to that yet. It’s part of… Read more »

eu? It is an empire!

This eu is a disgusting empire.I was always told empire were and are bad. 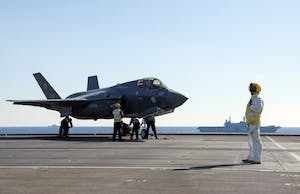