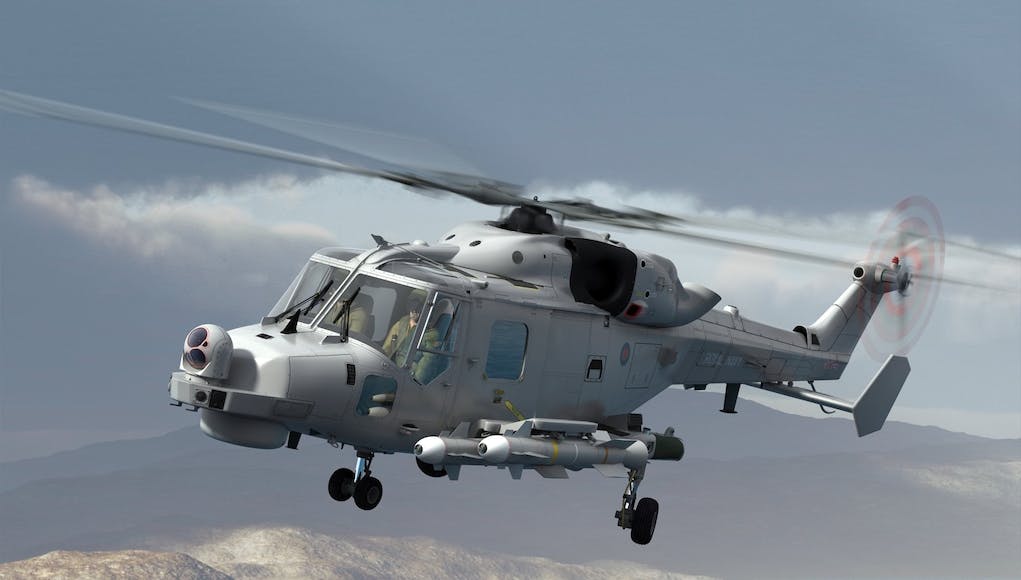 The two AW159 Wildcats are currently deployed as part of the French Navy’s five month amphibious deployment, Exercise Jeanne d’Arc, to the Middle East, Asia and South Pacific and are embarked on the helicopter assault ship FS Dixmude to provide a battlefield reconnaissance capability to the deployed forces.

According to the manufacturer Leonardo, the AW159 has a semi-rigid rotor head which gives it high agility and the same legendary ship operating capabilities of the Lynx helicopter. It is also fitted with composite rotor blades utilising the same technology that enabled the Lynx to break the world helicopter speed record. The AW159 is powered by a pair of LHTEC CTS800-4N engines, each providing up to 1,361 shp, which gives the aircraft exceptional performance, even in hot and high environments.

“The AW159 has the most modern integrated cockpit of any naval helicopter, featuring four large area (10″ x 8”) cockpit displays and a fully integrated avionics suite and mission system to provide increased mission capability and increased crew effectiveness. The key sensors integrated into the AW159 include the Leonardo Seaspray 7000E series Active Electronically-Scanned Array (AESA) radar, a dipping sonar system, electro-optical device and Leonardo electronic warfare systems. A range of weapons can be carried, including torpedoes and air-to-surface missiles, on its weapon carriers.

The UK’s Royal Navy and British Army operate 62 AW159 Wildcats in both naval and over land roles including ASuW, ASW, maritime surveillance and battlefield reconnaissance, while the Republic of Korea Navy operate eight AW159 helicopters in ASW and ASuW roles.

The Philippine Navy has also ordered two AW159s that will be delivered next year. The Royal Malaysian Navy currently operates the Leonardo Super Lynx 300 helicopter in the Anti-submarine warfare (ASW) and anti-surface warfare (ASuW) roles.”

The British Army’s variant of the Wildcat is almost identical to the Royal Navy variant with the only major equipment differences being the Army aircraft do not have the Seaspray 7000E series AESA radar or weapon carriers.

What competition? The Wildcat is alone in its niche.

Mainly the Sea Hawk (old but cheap) I think Leonardo market the AW139/149 in maritime role, there is also the NF90 the Dophine and an increasing number of cheaper UAV’s that will be able to perform the ASW role in the future.

They’re much bigger. If you want a small ship’s helo, the Wildcat is pretty much alone.

Does the UK MOD have a technology stake in the wildcat?

I think you mean: does the MoD have IP ownership? The answer is yes.

Perhaps it’d make more of an impact if it had some missiles to show off.

Ron5
Reply to  Bloke down the pub

So you didn’t actually look at the headline picture.

What are they anyway? I thought Skua had been retired and Venom and Martlet not in service yet.
Mock ups perhaps or is that a legacy photo?

Lol i see what you mean.

Malaysia was the launch customer for the Super Lynx 300 so a logical place to market the Wildcat to.

Does the UK version have the dipping sonar?

No, not deemed necessary as Merlin does. Personally I think that is a bit short sighted but lack of a dipping sonar pails into insignificance vs the more pressing issue of no tactical data link being fitted to the type.

Ahh…. shortsightedness…. the hallmark of uk procurement….. almost always down to budget reasons…… not that were alone in this! couple examples…f22 raptor, zumwalt destroyers, etc, etc.

Is there any plan to address the lack of the data link? I think I read it was planned but the funding subsequently never allocated or funding that had been allocated was cut at some point.

Be good to get some orders for the 159. If only we could get HMG to commit to the AW149 as the new meduim lift to replace puma UK rotor would be nice and safe for decades.

My assumption is that the puma will quietly get retired with no replacement.

Let’s hope they do at least invest in the existing frames and add the data link capability, which seems fundamental to them being able to do their role fully.

We certainly want to maximise the number of these around the south china sea.

So many spelling errors.

The lack of export orders for the maritime version is very disappointing.

The market in general wants more capable and therefore heavier platforms like S70 and NH90.

(Chris H) Mike Saul – Why would we want to export UK jobs to the USA to procure an aircraft that is older and inferior in power, speed, lift, numbers of people lifted by AH149 let alone a Merlin?And with nowhere near the technology on offer in a Wildcat.

Or older, slower and heading towards the end of its life. Invest in the future and our own rotor capability is what we should be doing. we already have production lines for a superb meduim lift that’s actually closer to heavy lift (Merlin) and the most advanced light military rotor out their, all we need is a modern true meduim rotor production line and we will be golden for a couple of decades. Leonardo have already promised the AW 149 production line to the UK if the MOD buy it and it’s a really very good meduim rotor, faster, longer… Read more »