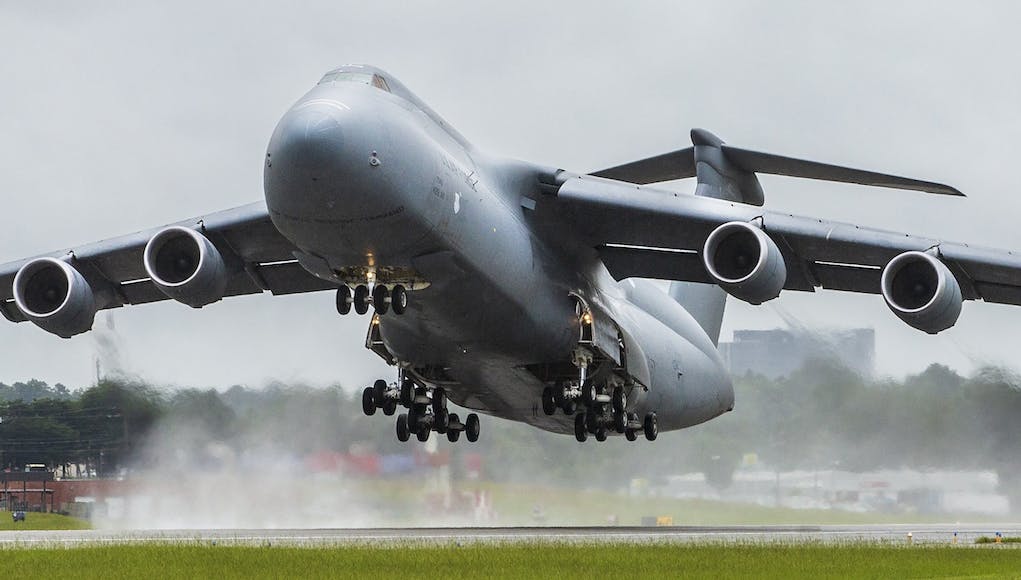 The delivery completes the RERP upgrade, which extends the service life of the C-5 fleet out until the 2040s.

“With the capability inherent in the C-5M, the Super Galaxy is more efficient and more reliable, and better able to do its job of truly global strategic airlift,” said Patricia Pagan, Lockheed Martin Air Mobility and Maritime Missions Strategic Airlift director,

“I am very proud of the contractor-government team than carried out the C-5 fleet modernisation effort. We’ve worked very hard to ensure the C-5Ms are the absolute best strategic airlifters possible for our armed forces.”

A US Air Force Reserve Command aircrew from the 439th Airlift Wing at Westover Air Reserve Base, Massachusetts, ferried the final C-5M to Stewart Air Force Base, New York, where the aircraft will undergo interior paint restoration. Once that work is complete, the aircraft will be flown to Westover where it will be the eighth C-5M assigned to the base, say Lockheed.

“The heart of the system is the GE F138 turbofan engine (known as a CF6-80C2L1F in the commercial world) de-rated to 50,000 pounds of thrust on the C-5M. This engine provides 22 percent more thrust than the out-of-production TF39 turbofans on the earlier C-5A/B/C aircraft. The engines also allow the C-5M to meet the FAA’s Stage 4 noise reduction requirements.

Is it not possible for the RAF to lease this aircraft if its a feasible option with the US Government? Such a prospect would argument the C17 fleet with substantial additional airlift capacity. Depending on how Britains international horizon develops post-2019, increased payload reach, could prove essential, especially in times of emergency?
No plane can be big enough if urgent consignments are required in a hurry. Galaxy would offer a real advantage in such circumstances in combination with Atlas and C17.

I think air lift is an area we are well provided for compared to many.

I doubt the USAF would want to lease enough of them to matter. What would be nice if the UK teamed with Ukraine to build a few of their big aircraft in the UK, with the UK to try marketing them abroad.

The question was simply about the Galaxy option. Atlas, C17 can’t offer the same lift opportunities as Galaxy, and as I suggested, Global Britain could find its international mandate considerably stretched? The idea is a lease only and when required, not a permanent deployment and depending on the operation, manned entirely by US personnel.

I totally agree that the C5 would be an unnecessary acquisition. It is not as if the MoD has money to burn – there would be many things which would be ahead on any fantasy fleet! I agree that more P8s would certainly be much further up that list. Maybe a faster CoD option for the QE carriers? Nice to see the second Tide join the fleet. Good to see more of the F35s land on our fair isle last week. Boosting the budget to 2.5% would leave more room for not dipping into the £178bn defence improvement plan for… Read more »

I totally agree that the C5 would be an unnecessary acquisition. It is not as if the MoD has money to burn – there would be many things which would be ahead on any fantasy fleet! I agree that more P8s would certainly be much further up that list. Maybe a faster CoD option for the QE carriers? Nice to see the second Tide join the fleet. Good to see more of the F35s land on our fair isle last week. Boosting the budget to 2.5% would leave more room for not dipping into the £178bn defence improvement plan for… Read more »

It’s not an acquisition it’s a lease I’m proposing. For some time in the 70’s & 80’s the Belfast was hired to transport oversized loads once they had been retired from the RAF. We could not use the giant Russian made plane on overseas military engagements, for obvious reasons. That leaves the Galaxy as the only viable augmentation to the existing fleet, if such a high capacity plane were required.

This is neither here nor there, but the Galaxy has the most unique engine noise I’ve ever heard.

Will
Reply to  maurice10

The An-124 is a giant Ukrainian plane so the Russians wouldn’t have any say in the matter.

Also nice to see the first of the T45 propulsion improvements complete – shame they dit not fit MK 41 VLS whist in dry dock!

I was employed by the only outside of the air depot legacy C5 CRO operation for years. C5A, B, and Cs. – not the Ms, those were Lockheed’s. The Warner AD would tear down enormous chunks of the aircraft (an aft ramp doors were 2 stories high and 60′ long after boxing laid on their sides) and send them to us for refurbishment… Radomes, nacelles, ramp extensions, flaps, forward ramps etc… Giant oversized loads lined up 10 at a time on the road in front of the plant. Most were in very bad condition, corroded, cracked – the aft ramps… Read more »

Off topic.
It appears the US are coming on board with Tempest.
https://www.janes.com/article/82256/uk-welcomes-us-participation-in-tempest-fighter-jet-concept

(Chris H) – Nigel Collins – Yes of course the Yanks want to be inside of Tempest so they can make sure US Incorporated can find a way to either kill it at birth or outsell it internationally with giveaway cheap option subsidised by the US Government. Its how they work. As for the Japanese ‘showing interest’ well they are just an extension of US military production and buying policy. Yes I have said it before but its still true so worth repeating whenever people think its a great idea. We allow either of these to be anything more than… Read more »

I Know!
A project to be kept in house and controlled by us every step of the way.
Lets hope we can find the funding for once.

From a year ago
U.S. AIR FORCE C-5 GALAXY PERFORMS NOSE GEAR UP LANDING AT ROTA AIR BASE IN SPAIN
https://theaviationist.com/2017/05/23/u-s-air-force-c-5-galaxy-performs-nose-gear-up-landing-at-rota-air-base-in-spain/

The C5 fleet has had this problem since inception. Due to the “kneeling” feature of the aircraft, the nosegear has been plagued by problems. My firm didn’t work on the gear struts and retraction / extension mechanisms themselves but we fixed a few gear doors that taken damage from these incidents (not all were that extreme, most were a partial extension ) another incident involved the doors not opening but the gear dropping… THAT was a mess.

The M is still light years ahead of the older variations though.
Cheers!

H,
The only reason i posted that is I simply came across it the day before. Personally I like the C5, and yes the latest iteration is miles ahead of the rest.

not taken as a opener at all mate, it’s just that I am VERY familiar with that little problem… We were once down to the point where the USAF was so low on doors (always the right front gear) that they could not get an aircraft with a damaged door off the ground at Lajes so they UPS’d it to us over a weekend and we put in a full court press to fix it – I had to pull several magical rabbits out of my cap that weekend I assure you. 😀