The Lockheed Martin ‘LMXT Strategic Tanker’ is a modified version of the Airbus A330 Multi Role Tanker Transport, an aircraft known in British service as ‘Voyager’.

Offered in response to the U.S. Air Force’s KC-Y Programme, the firm say that LMXT “represents the newest chapter in Lockheed Martin’s 60+ year history of producing and delivering tanker and cargo aircraft for the U.S. Air Force, U.S. Marine Corps, U.S. Navy and multiple operators around the world”. 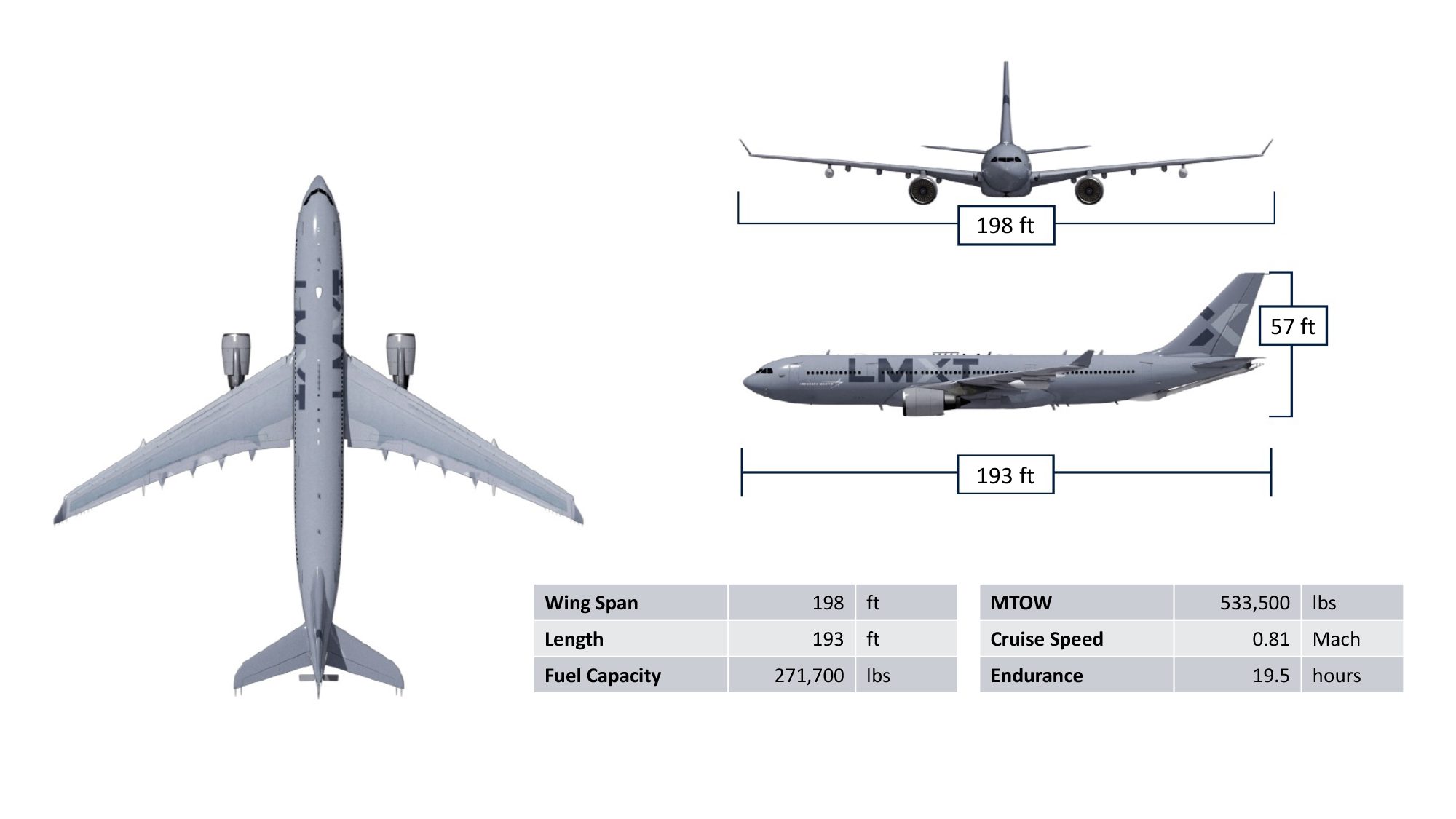 “The LMXT complements the U.S. Air Force’s tanker capabilities by providing the most advanced aerial refueler to meet America’s immediate and long-term mission requirements. The LMXT strengthens and expands the U.S. aerospace industrial base by working with existing and new American suppliers. The LMXT also cultivates and sustains high-tech, high-skill American manufacturing jobs.”

“Lockheed Martin has a long and successful track record of producing aircraft for the U.S. Air Force, and we understand the critical role tankers play in ensuring America’s total mission success. The LMXT combines proven performance and operator-specific capabilities to meet the Air Force’s refueling requirements in support of America’s National Defense Strategy.”

The firm also say here that the Lockheed Martin strategic tanker “builds on the combat-proven design of the Airbus A330 Multi Role Tanker Transport (MRTT)”.

“As the prime contractor, Lockheed Martin works directly to implement U.S. Air Force-specific requirements within the LMXT. As the strategic tanker of choice for 13 nations, the MRTT has logged more than 250,000 flight hours refueling U.S. and allied fighter, transport and maritime patrol aircraft in combat theater environments.”

Surely US industry will lobby Lockheed to use a Boeing aircraft. Can’t imagine them letting this happen.

Would be built at Airbus US factory, the Senators in that area are already lobbying in support of the bid.

Assembled. Most of the components will come from Europe, the wings shipped by barge from the UK to Alabama.

Over the past 30 years, I can think of only a handful of instances where the DOD have used European aircraft. Goshawk, Lakota, Dolphin. Then again there is the Airbus facility at Alabama, so you never know

Should have been the choice from the go. More capable, cheaper and ready now. The Boeing KC-46 is disaster of a program.

Main difference between the US and European type is the US type will carry 13 tonnes of additional fuel and have US communications equipment installed. I am not sure how they are getting the extra fuel in as they have said it wont be an additional tank in the lower cargo hold, possibly they are leaving some of the European features off and that saves weight.

The extra fuel is a big selling point of the bid as the base A330MRTT already has more capacity than the one the US is currently buying.

Airbus has raised the maximum takeoff weight of the civil A330 from 235tonnes to 251tonnes. I think all the weight improvement is carryover from that.

All A330 have massively oversized structural tanks (relative to MTOW) because the airframe/wings have commonality with the longer ranged, four engine A340.

Its possible that some of the weight saving for LMXT comes from deletion of the passenger cabin (seats, galleys, lavs) because the USAF use removable palatalized seating.

So it looks like it’s just a simple trade off, remove weight, fill up the tanks, or any combination thereof.

Balm on the AUKUS wounds?

They must be in a good position, especially the mess Boeing has got itself into

Actually first time the US partner was Northrop Grumman.

I thought the Pegasus was the winner and resulted in cost overruns and delays from Boeing? Also, I thought Airbus won in the first place, and Boeing launched an appeal which was found in Boeing’s favour? and then a pentagon official was sent to prison for corruption?

Yes, really dodgy story. Originally in early 2000’s US Airforce set out a requirement for fuel tankers, Boeing won a contract to lease 100 tankers with the KC767 after they dismissed the then in development Airbus offering as high risk, lower capacity and less suited to military requirements (it had an autopilot while the Boeing required manual control) furore in Washington over the cost and its replaced with a contract to buy 80 and lease 20. Then a US Airman who had just got a job with Boeing was convicted of fraud (He had rigged it so that Boeing beat… Read more »

You are correct. I believe this contract is to replace the KC10, not the KC135. But I stand to be corrected.

LM know that their tender is perhaps a 10:1 long shot. But LMXT is based on the proven MRTT and LM can leverage Airbus info from its many previous sales campaigns, and also operational data from very credible users/operators such as the RAF and RAAF. Investing perhaps $10M in the procurement process is petty cash for LM, and an easy call with potential profits reaching $1+ Bn if they unexpectedly won.

Leaving aside it’s the better product a big order might help with US/French relations.

OK bit confused I thought the USAF had a tanker the Boeing KC-46. In fact there was a competition that the Airbus won but Boeing had reopened as they lost! The KC-46 was forced on the USAF as it was all USA.

Now there is a new tanker competition… why? Can someone explain.

As has been said before, there are a lot of reasons. One of the main ones is that the large fleet of KC135s is fast running out of hours and spares. The price of putting an aircraft through deep level maintenance is getting excessively expensive. The KC10 was supposed to supplement it. However, more and more KC135s are awaiting spares or crack repairs and there aren’t enough KC10s, who are also burning through their hours. The USAF still operate around 400 KC135s along with just under 60 KC10s. The Boeing KC46 was supposed to replace both types. However, Boeing have… Read more »

MRRTs boom has had issues, as the RAAF had to stop using the boom, as it kept departing the aircraft. The Airbus system is easier less techy but still was a problem.
boom issues also affected range and fuel burn numbers so its a learning curve.
but the French have torpedoed that deal with their SULKING.

There is one big problem with the LMXT. It doesn’t have a wide opening cargo door to load freight and it’s main deck floor isn’t strengthened. Carry freight is one of tasks required of these planes.

I’m pretty sure that the Voyager aircraft are capable of carrying cargo in the cabin as well as passengers when required. It shouldn’t be an issue for Airbus to offer this in their proposal with LM as there are already A330 aircraft operating purely in the freighter role.

The main deck floor in Voyager isn’t strengthened so the weight of the cargo it can carry is limited. Adding a cargo loading door may require additional certification – although the LMXT itself will require USAF certification anyway. USAF typically requires it’s planes to carry heavy freight loads. It is a drawback to the LMXT but the package as a whole must be better that the underperforming KA-46. No doubt the decision will come down to politics and how much American content the LMXT is seen to have.

I think if the USAF went ahead with this purchase Airbus would certainly consider making modifications to the aircraft to make it structurally stronger for such a big contract. I’m pretty sure the LMXT is certainly capable of carrying much more cargo than the KC-46.

There are 3 parts to the tanker replacement. KC-X, KC-Y and KC-Z, KC-X is what Boeing finally won with the KC46. KC-Y is what is being offered on contract now. KC-Z is going to be in the future, rumoured to become a stealth tanker. The American tanker replacement program is being done in 3 stages. Only stage 1 or X has happened so far. Obviously winning the first one was seen as being advantageous to being able to win the 2nd and 3rd contracts. lots has happened since this tanker replacement program was originally started and can be found on… Read more »

Given the US currently needs a number of tankers to be operational within the next few years, and option would be to Use EX leased A330 aircraft and convert them over to tankers as what the RAAF I currently doing with the last two tankers. They can run the fuel pods and at a later stage the boom can be installed. This would provide the USAF with newish aircraft so they can start replacing the older KC-135.