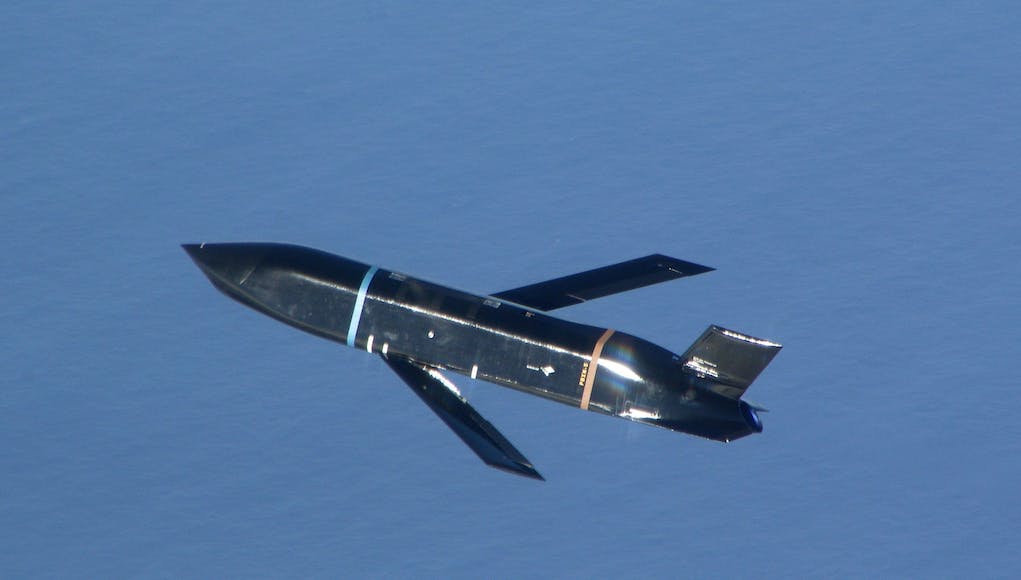 In the event over the Sea Range at Point Mugu, California, a U.S. Air Force B-1B from Dyess Air Force Base, Texas, released the pair of LRASMs. The missiles navigated through all planned waypoints, transitioned to mid-course guidance and flew toward the moving maritime target using inputs from the onboard sensors. The missiles then positively identified the intended target and impacted successfully say the firm.

“As LRASM moves toward early operational fielding for the U.S. Air Force and U.S. Navy, the weapon system continues to demonstrate critical capabilities that our warfighters need.”

LRASM is designed to detect and destroy specific targets within groups of ships by employing advanced technologies that reduce dependence on intelligence, surveillance and reconnaissance platforms, network links and GPS navigation in contested environments.

“LRASM is a precision-guided, anti-ship standoff missile based on the successful Joint Air-to-Surface Standoff Missile – Extended Range. It is designed to meet the needs of U.S. Navy and U.S. Air Force warfighters in contested environments.

The air-launched variant provides an early operational capability for the U.S. Navy’s offensive anti-surface warfare Increment I requirement to be integrated onboard the U.S. Air Force’s B-1B in 2018 and on the U.S. Navy’s F/A-18E/F Super Hornet in 2019.”

We need to acquire this missile. Launched from T26 and integrated into F35 if that’s possible from the ‘b’? Then get box launched JSM for the T31. Our ships have to have a credible way to attack other ships from range. Harpoon just won’t cut it against modern air defences. Ideally we should have a smaller cheap asm that can swarm and target specific critical areas of a ship, and a more expensive super stealthy high speed big hitter that can wreck in a single hit. They could even be used in combination against a powerful target, distract with lots… Read more »

I also think we need to rethink ship based missile systems. Most box launchers have a very limited number of missiles, which I presume can only be reloaded at port. With the air defence systems and number of defensive missiles modern frigates and destroyers carry now, they stand a good chance of taking out the attacking ASM’s, and would leave our ship unable to continue attacking. Back to port. We should be developing a cheap small missile system about the size of a aa missile. The object is to fire lots at a target, and each small warhead trying to… Read more »

Regarding range, we need to get this missile fitted to our P-8s and make sure we have enough to deploy them to our overseas bases to provide air cover for both tasks forces and solitary patrol frigates.

For the swam side, what happened with the brimstone tests? I remember seeing a video where even the US were showing a little interest although it was clear they preferred the home grown option.

We do indeed need to acquire this capability and fire it from T26 (Mk41 VLS) and F35 (underwing mount). As for a swarm style option, that will be provided by SPEAR3 fired from F35 (8 per aircraft).

What’s about from a task force with no carrier and no F35? What about if the carrier is damaged and out of action? Need to have a ship launched system so that if our primary delivery method is not available we have options.

Sea Venom and Martlet from Wildcat. Can’t afford everything!

MBDA have produced renders of SPEAR3 launching from a VLS silo and displayed models at defence exhibitions of a VLS SPEAR3 (SPEAR3 with a booster strapped to it). That doesn’t make it real but at least shows that MBDA have considered that option and hopefully it is designed with the option in mind if funding could be allocated to make it a reality. I think the VLS launch system envisaged is cold launch as well, i.e. probably from the same silos as Sea Ceptor. That would be a good swarm option and so long as T31 has a respectable number… Read more »

Spear three ? Could be ship launched, after all great big heavyweight ASMs are just so Tom Clancy.

I guess the question that a lot of people will now be asking, especially in light of the advances in anti-ship missile technology from our adversaries, is:
“Does this now make aircraft carriers more vunerable”
This is a question for debate and not a criticism of our swanky new carriers, and comes from an ex airforce chap!!

Paul our carriers would not be more vulnerable or should I say would be much less vulnerable if they had an adequate surface warship escort, enough astute class subs to patrol ahead and to their flanks to actively seek out and destroy enemy surface and subsurface threats and of course enough F35Bs to maintain a near impenetrable air defence screen. The RAF needs to be told to get behind the F35B as any attempt to purchase the A variant undermines the RN and carrier strike. We need a firm commitment and order asap for at least another 48 F35Bs to… Read more »

Has the RAF ever considered operating the C model F35s as opposed to the A to allow future operations off a STOBAR or even better – Cat and Trap modified QE?

The chances of refitting QE and PoW are minute due to the astronomical costs that would be involved. The navy are very happy with 2 large STOVL carriers and are unlikely to change them – still better than 95% of the world’s navies.

We could never generate the air wing required for a cats and traps carrier, the French have mare keeping their air crews carrier qualified. The beauty of the f35b that most people forget is that it’s incredibly simple to qualify a pilot for carrier ops, meaning you can just about take an airforce squadron and pop it on the carrier, which is impossible for cats and traps. This means as long as the MOD keeps to its plans and does not get side tracked with buying F35As we could in a decade or two go from a qualified carrier air… Read more »

Couldn’t the RAF qual their pilots on American carriers like the French? They could also deploy on U.S. CVNs just as our USMC B models will ride on the QEs.

Gotta do what you gotta do… 😀

Those were the days!

RAF has no plans to operate A model. They did want to change from B to C.

Martin the only plan for the C model was at the time they considered the cats and traps one carrier only route for a few months under the previous Tory government. There have been rumblings of a split buy of As for years. It started well before Hammonds we will buy 48 Bs and will then consider future purchases, but his speech has always left the door wide open. The purchase of the C without carriers for them to operate on would be a a very um unwise move, it would essentially flush money down the toilet. The abiding issue… Read more »

Hi Paul. I wouldn’t say this makes our carriers more vulnerable, it just highlights vulnerabilities which are already known to exist. The way in which the carriers will be used is with a “tailor made” supporting task force which would be dependant on the mission being undertaken. If the carries were being used in a hot war scenario where lrasm were a known threat, I would suspect they would have a sizeable task force providing support. The main risk of this way of operating is that it doesn’t take into account cold to hot war events nor surprises. If a… Read more »

LRASM looks like the way to go. But how long will it take? The RN has a credibility and exposure issue today. Poseidon and Harpoon Block II may go some way towards addressing this to a practical timescale if we can accelerate purchase and overseas deployment of the P-8 in numbers.
https://www.parliament.uk/business/publications/written-questions-answers-statements/written-question/Commons/2018-05-16/144839/

“The air-launched variant provides an early operational capability for the U.S. Navy’s offensive anti-surface warfare Increment I requirement to be integrated onboard the U.S. Air Force’s B-1B in 2018 and on the U.S. Navy’s F/A-18E/F Super Hornet in 2019.” No mention of F-35. What’s the deal there? With JSM integration planned for F-35 (only external for the F-35B unfortunately), probably a good possibility of P-8A integration given the Norwegians and Australian are getting some of those (and those are the two countries funding the JSM integration with F-35), plus box-launched NSM already in service JSM/NSM would seem to be the… Read more »

Will the UK F35s have this capability in this Julian?

Helions as far as I’m aware the F35b will not have the capability to deliver the B61 free fall bucket of sunshine ( that’s US/UK and whoever else). It does not fit in the weapons bays and I don’t believe I’ve seen described anywhere as a mounted on a wing hard point. Generally nations are not shy about nuclear capability so I’d be supprised if there was a hidden capability. TNWs are no longer part of the U.K. Arsenal so we have no use for that ability. Although I believe there are B61s stored in the UK these are not… Read more »

Thank you for the reply Jonathan, I was wondering if the RAF “A” models were going to get the capability under the NATO nuclear sharing program (heck even the Turks have access to them). The Chinese in particular should be a cause for concern over first use of tac nukes, the CCP leadership, after building up strident nationalism in their population against the West, know they might not survive in the face of a humiliating military disaster if and when they commit the PLA /PLAN to a large scale military engagement – especially if it was against the U.S. or… Read more »

F-35C doesn’t have IOC until 2019 and is currently not scheduled for deployment till 20-21. So the Navy is working on getting LRASM variants for the Super Hornets, the new box launchers, and Mk.41 first.

The “Bone” is about to get a major overhaul…

If the airframes are still good, we should buy a fleet of these from you when they are retired. We should have at least a modest long range bomber capability. 2 squadrons would be nice.

~ 24 of them would look good in RAF colors wouldn’t they? Like the B29 Washingtons once flown by them.

Ive always thought the B1 is one of the best looking planes ever.

I did read an article that suggested the future of air combat was actually in large aircraft and the days of small single seat fighters was numbered.

In this individuals view the rapid development of high off bore sight BVR missiles with the ability to sustain 50g + manovering means that small agile fighters are a bit life limited and the future is in large airframes with great capability/jamming/processing power/range/ weapons payload ect.

Not sure if he was right but it was an interesting read.

I really hope they develop the deck launcher, then we can fit it to T45 and T23 then role it across to T26 and even T31. Mk41 launcher can be used for TLAM, ASROC and SM3 then and we don’t have to GAP capability for another decade. Also gives T31 an effectiveland Attack capability.

I’d be more impressed if the test prooved it could get past the Russian anti missile defences, or even past phalanx.
I thought our next generation ASM was Perseus, though we need a stopgap until that’s ready in 10 years or more. Sending DDG/FFGs to sea with no ASM should never be considered.