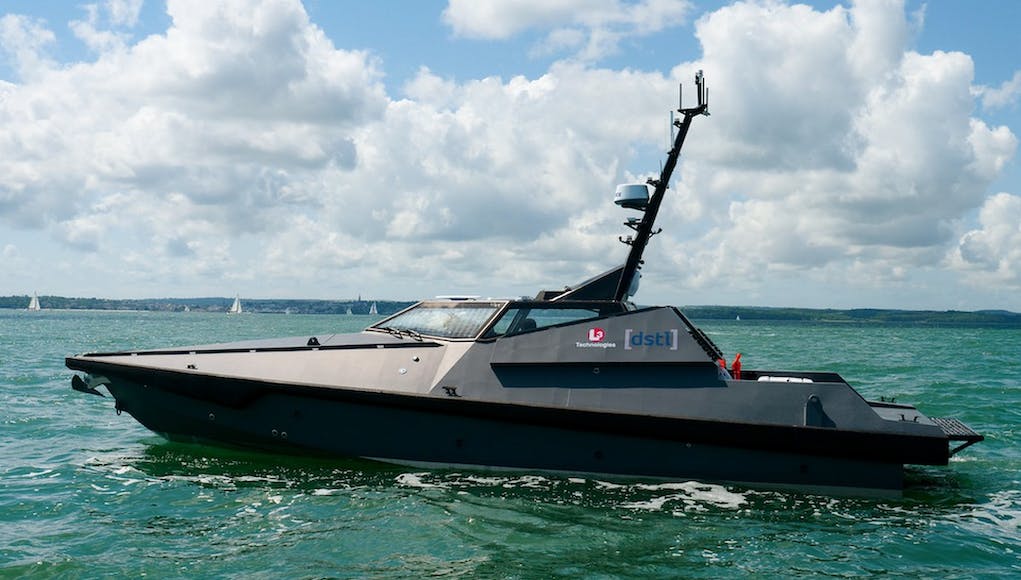 An unmanned system that could be used to protect the UK’s future warships has been unveiled by Defence Secretary Ben Wallace.

The new system is similar to a water-borne drone.

At 13 metres long, the vessel swims around a naval task force, while being remote controlled from a rig. The systems can be used to identify threats such as mines or collect intel on enemy ships.

The kit was put through its paces recently in a demonstration at the Defence and Security Equipment International conference in London, where it protected HMS Argyll in a harbour force protection.

“MAST-13 is pioneering the future of Unmanned Surface Vehicles for our world-leading Navy. The development of unmanned technology is vital for success in modern warfare, going beyond the capability of traditional ships to attack and defend in uncertain environments. As more advanced technology and new threats continue to evolve, collaborative technology development ensures we are constantly pushing the boundaries to give our armed forces the best capabilities possible.”

The new system has been unveiled as part of the Maritime Autonomy Surface Testbed (MAST) 13, a programme developed by the Defence Science and Technology Laboratory (Dstl) in collaboration with L3Harris.

The purpose of MAST 13 is to further understanding of how Unmanned Surface Vehicles (USVs) can be used in defence.

A couple of this per the T31 or T26/45 would be good to operate 20/30 miles out and extend the range of detection of hostile. Add some simple
Weapons like 30cal gun with Martlet and can engage targets up to helicopters and uavs, and small attack boats and then sprint back to base. Also add some EW on it as added to the spear-ew and can maybe take sea-skimming missiles off target from the main fleets.