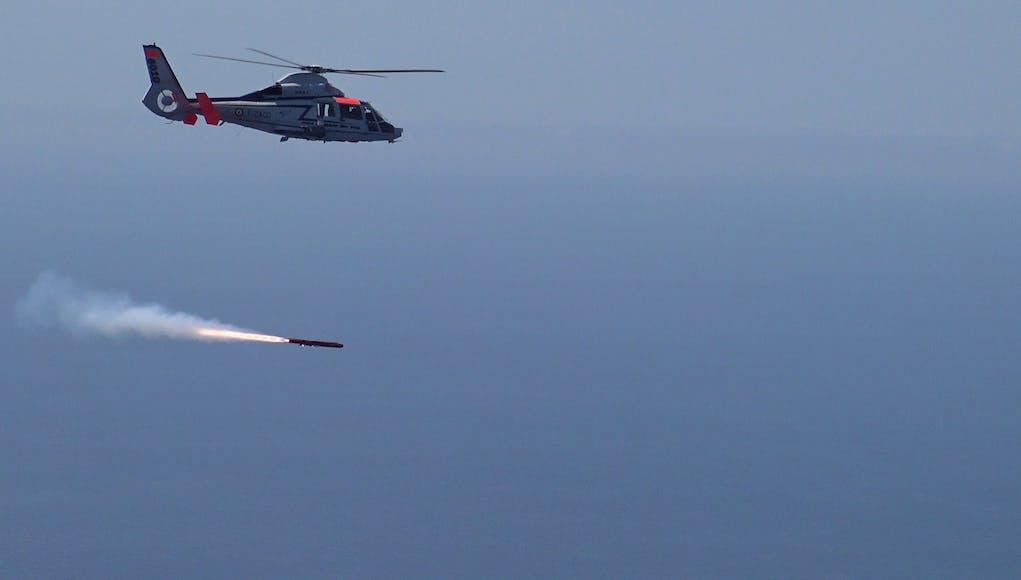 The first firing is a major milestone for the Anglo-French Sea Venom anti-ship missile.

The missile will replace existing and legacy systems such as Sea Skua and the AS15TT anti-ship missiles in British and French service.

The trial of the 100 kg-class missile was conducted from a Dauphin test bed helicopter owned by the DGA (Direction Générale de l’Armement – the French defence procurement agency).

“The missile trial was a complete success, and is a proud moment for the company and all those involved in the project. When it enters service Sea Venom/ANL will provide a major increase in capability to the French and UK armed forces.”

Jointly ordered in 2014, the Sea Venom/ANL project has been developed 50/50 between the UK and France.

“Although a first firing this was in no way a cautious one. The system was pushed to the very edge of its range capability – a bold step showing our confidence in the design maturity and making success all the more sweet. The next step is to exercise the systems’ operator-in-the-loop capabilities.”

In UK service the missile is planned to be used from the AW159 Wildcat helicopter, while France will operate the missile from its new Hélicoptère Interarmées Léger.

With Sea Skua now retired, Royal Navy helicopters will have no anti-ship missiles until the Sea Venom and Martlet missiles enter service in 2020.

Wildcat will receive the heavy anti-ship missile Sea Venom and the smaller Martlet to be used against small boats.

Martlet, formerly FASGW (Light), was due to enter service around 2015 on the Fleet Air Arm’s new Lynx Wildcat maritime helicopters, it still hasn’t. However the Ministry of Defence has placed an initial order for 1,000 missiles.

In 2014, the Royal Navy awarded Thales Group a £48 million contract to deliver Martlet and later that year a contract was awarded to MBDA for the Sea Venom missile for use against vessels and land targets, replacing the Sea Skua.

Both missiles are to be integrated by Leonardo (then AugustaWestland) in a single £90m programme by 2018, with initial operating capability for both planned for October 2020.

Wildcat is, according to the manufacturer, able to operate up to 20 Martlet missiles or 4 Sea Venom missiles to disable or destroy vessels up to 1000 tonnes.

As for Merlin, the helicopter has two hardpoints to carry four Sting Ray torpedoes or depth charges. Some customers of the aircraft have chosen to deploy anti-ship missiles. Indeed in 2011, the Royal Navy was considering equipping their Merlin fleet with an anti-surface missile. This was reportedly dropped due to cost.

Only a 30kg warhead means that it is only suitable for small targets. A heavy missile would be needed to sink a Frigate . So of limited use but welcome assuming the RN orders some.

They are not intended to take on heavy targets.

So I guess if any ships over 1000 tons are on the horizon the mother ships had better turn and run as they have no onboard capability either to confront them.

I expect it would still be possible to fire several missiles against one target to at least severely damage it, making it unready for combat, but that might just be wishful thinking. I think we need LRASM for the next couple of decades followed by Perseus in the mid 2030s. Hopefully that much time for its development would mean it would enter service as a very capable hypersonic missile, capable of penetrating formidable anti-air defences.

Britain could have upgraded Harpoons today if it wanted.
LRASM will not be available in canisters….. VLS or air launched..

This is good news, we urgently need this weapon in service asap. With regards the issue of dealing with large warships there is a significant capability gap until mbda bring out their new anti ship missile in 2023. I think we need to go for Norwegian anti ship missile. Proven off the shelf design superior to harpoon and no r+d costs.

A Wildcat armed with 2 x Sea Venoms & 10 x LMMs will be the most formidable helicopter on the seas.

In an age of littoral and especially asymmetric naval warfare, this platform and loadout will be an exceptional asset.

(I’m imagining a scenario in the Persian gulf…. the Ayatollahs flotillas of jet boats don’t stand a chance… so MBDA better get cracking in case the Ayatollah’s agent Mr Corbyn cancels it all)

I have no idea if this would work but can’t we just use the F-35 to bomb bigger ships or just use our subs?
It’s not like we have zero options.

I wondered the same thing. A Kirov has 312 anti-aircraft missiles not including the Kashtan gun/missile ciws. Could an F35 bomb the Kirov and remain undetected? If not, it would be toast. How would we sink a Kirov-led battle group in the worst-case scenario of an all-out conventional war?

It could get very close without a proper detection.
It wouldn’t matter though.
It’s not like the 2 x 500lb paveways or a handfull of Brimstone/Spears will cause much damage to that behemoth.

For large targets you would need an astute to fire a ripple of spearfish heavy torpedoes from 5-10 miles away to take out a large surface ship like Kirov or Kuznetsov or even sovremny or Udaloy classes. An F35b could do significant damage with a large number of brimstone missiles but unlikely to sink a ship. Unless it goes high altitude and drops some laser guided bombs onto a large warship. Not sure how good the sensors are and whether an F35b would be able to be tracked and targetted by Russian naval radar. Anyone out there know with their… Read more »

As I understand it a F35 can be detected but is almost impossible to track making targeting very difficult.

The sensible thing to do is to procure the NSM for surface ships and the JSM for the F35, if we procure the A variant then these can be carried internally.

A F35A with JSM would make Russian warships a “convenient target”.

But then you have to ask yourself when was the last time the UK MOD did anything sensible?

How far away is this technology? A range of 80 miles is quoted in the article which seems comparable with many ASM.
http://www.upi.com/Defense-News/2017/06/28/BAE-Leonardo-partner-on-precision-guided-artillery-ammunition/4831498676678/

Trouble with artillery shells is that the trajectory is very predictable therefore they are easily detected by radar (they have no stealth characteristics) and intercepted by warships with even limited self defence.

Modern anti ship missiles are both stealthy and can perform erratic maneuvers.

Granted. But a naval 5in gun might fire 20 rounds a minute. Not sure it will manage that rate with guided ammunition or how the guidance will work, but that’s a lot of shells to intercept.

Agreed, the most effective warships will have multiple layers of air defence systems and within each layer multiple systems to intercept incoming targets.

Not confident RN warships will be able to cope with a saturation attack whether it’s be shells or missiles.

It looks like the RN will have to relearn the lessons of war at some point in the future the hard way.

Maybe that’s the thinking behind the 48 Sea Ceptor cells on Type 26 rather than an all Mk41 fit?
In terms of killing a pier frigate perhaps P8 Poseidon and Harpoon would work if you are within 100-2000 miles of an RAF base. Are we buying Harpoons with our P8’s? Otherwise an Astute.