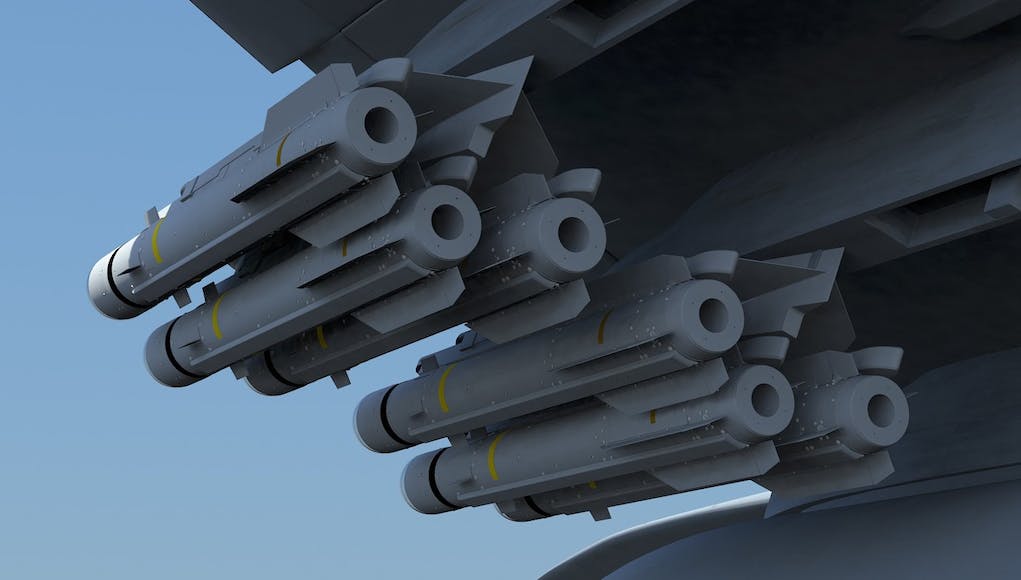 According to the company, MBDA will manufacture new Brimstone missiles for Typhoon jets and in future for the RAF’s new Protector RPAS and new Apache attack helicopters.

“We will remove all material obsolescence from what we had in Brimstone 2, and we will introduce additional enhancements.”

“Our world-class defence industry is a key foundation on which our great military is built, and the weapons it produces – like the pinpoint Brimstone missiles – have been crucial in helping our fighter pilots on missions such as driving down Daesh territory in the Middle East.

This massive £400m investment is a huge boost to the proud workforce equipping our armed forces and will create and protect hundreds of jobs across the country, bolstering both the power of the Typhoon jet and British prosperity.”

The new missile, boasting an upgraded seeker, rocket motor, warhead and guidance system, will arm Typhoon when it takes over as the RAF’s principal ground-attack aircraft in 2019. It will replace all earlier variants in 2022.

Lt Gen Paul Jaques, who is in charge of land materiel, said:

“The Brimstone 2 CSP contract enables us to continue to deliver a world-class air-to-surface missile in support of the RAF’s Typhoon squadrons on operations worldwide. It is excellent news not only for our troops but also for the UK economy, with jobs and skills being sustained across the country.”

The programme will allow the weapon to be further developed for use on future aircraft, including the AH-64E Apache attack helicopters, and the RAF’s next-generation Protector unmanned aerial system as mentioned above.

Brimstone is essentially replacing the Hellfire missile. While transferring the Tornado’s ability to carry them over to the Typhoon in the meantime.

Spear 3 will eventually equip both the F35 and Typhoon. Spear 3 is vastly superior to the Brimstone.

It could only be used externally on f35 as its rail launched, and the UK only gets so many options as to what gets integrated so meteor and spear 3 will get those slots

Andrew, will the RN/RAF ever use external weapons (missiles) on F35 or is the stealth signature degraded by doing so?

It will depend on the mission as yes the stealth will be degraded. Asraam and paveway 4 are both qualified for external use.

Spear 3 is going to be fitted internally. 4 per bay. So an F35 can carry 8 Spears and 2 Meteors internally.

Most of its missions wont need stealth, e.g against islamic state

Getting the missile rated though on an f35 even if it is post spear3 allows you to give it as an export option to all the countries buying f35s. We would also need to look to get it cheaper than 175k though.

Impressive weapon which has already been used very successfully in combat & this is an improved version.It is also intended that Brimstone will equip the new Protector UAV’s and AH-64E’s.

Spear three is part of the Brimstone family of missiles with a lot of compatibility & will equip F35B.

Just the Saudis I think. Don’t know if Qatar has ordered it for their Typhoons.

It’s also in competition for a number of projects, including the US JAGM.

Sorry out of date info there, they chose the upgraded Hellfire

The US military wanted Dual-Mode Brimstone, it was proven beyond their required specifications on moving targets at various speeds (no other missile was as accurate) as well as stationary

This piece was from US Congress hearings exactly 4 years ago and is worth seeing how everyone was positive.
https://youtu.be/l2hj5USIl6M

But then the USA did what it always does and ‘bought American’. Even while its disappointing from a UK perspective you have to admire their commitment to domestic manufacturers

Thank for the replies, it seems a great shame that it’s doesn’t haven’t more customers especially the US.

I remember seeing that video ages back and feeling a bit excited that a British weapon was being considered to be bought by the Americans due to it being pretty much better at everything. You could see the general strongly supported it and wanted the missile. Then I remembered that they’ll only buy American and even in the rare times when they don’t they won’t buy it unless it’s nearly totally produced in the US. I’m all for nations wanting to build their own equipment but Americans take it to an almost fanatical level. I remember a debate in congress… Read more »

Germany wants to use it on its typhoons to , though I don’t believe it’s a firm order yet

Its looking very likely as they cancelled developing their own missile as Brimstone met all the requirements. Finally some common sense from another european country.
France is also likely to adopt it, as it should considering we purchased the Aster missiles off them with no recipricating purchades from from or Italy for uk missiles from what i’ve seen.

Make of this what you will

The US choice of upgrade Hellfire in preference to Brimstone exemplifies how difficult it is for the UK defence industry to make money out of our undoubted technology skills. France also has an unstated by French wherever possible policy, even if the product is inferior. Spear 3 will be a superior weapon to SDB but it has to be reckoned an achievement that we have held out against SDB for our F-35Bs. Germany I think is more open minded but is committed to EU co-operation which usually means ‘partnership’ with France. It is rational behaviour to support your own industrial… Read more »

How many SDBs can you buy for 1 brimstone missile?

I recall the answer is about 4.

Therein lies the problem, the balance between affordability and capability.

Many would consider that Brimstone is overpriced despite superior capability.

Well it is certainly ‘overpriced’ for taking out Isil snipers. Something along the lines of Predator and Martlet perhaps. Not sure whether this is feasible.

Afternoon
Good to see the debate moving from what we don’t have to what we are getting and how, in most cases, we are getting superior equipment. So it may be a bit over priced, but at least now we are finding these things out up front instead of it being underpriced and therefore budgeted incorrectly.
Some common sense seems to be prevailing on the MoD and rational questions and decisions are being taken.
What ever next??

I’m not sure it’s a good comparison sdb is a glide bomb brimstone has a rocket motor. Paveway 4 cost vs sdb would make more sense and brimstone vs hellfire. But no doubt the smaller mfg batches make the UK weapons more expensive on a per unit basis. Integration costs on modern aircraft are also prohibitive so unless the us purchase brimstone then I doubt any other f15,16,18 user will pay for integration. This is probably why the Saudis use us weapons on their f15s and UK weapons on their tornados and typhoons, and why Germany will probably buy brimstone.… Read more »

Yes Andrew your comparison was more accurate than the rather silly comment about the cost of SDB v Brimstone.

You are right without integration by Britain onto its equipment ie Typhoon and eventually its drones and attack helicopters there was no way other forces could use the missile. No one after all was going to buy Tornados or spend to integrate it with such an end of life programme. Now that Typhoon is getting it we see options open up. But sadly without US or at least European cooperative programmes it’s still a limited market to sell into. But committing to it has wider implications that are important for Britain and its defence industry and that is a future… Read more »

Good points re French philosophy on integration. Rafale sales with offensive weapons and frigates with mediocre missiles are examples.

Not a good comparison Mike.

SDB-1 is essentially a skinny JDAM with wings
GPS only guidance for use against static targets.

SDB-2 is still a guide bomb, but far more sophisticated in its guidance and more akin to the Brimstone.
They are similar in price.

The most important number is missing.

How many missiles will this £400m purchase?!

We can’t know if this is a good or bad deal for the taxpayer unless they tell us the quantity ordered.

Circa 2000 is a decent number but probably needed to replace the hundreds of brimstone fired at ISIS in Syria and Iraq. If there were to be any conflict with Russia we would need a lot more than 2000 missiles and would fire off those 2000 missiles pretty quickly. Hopefully the production can be ramped up to deliver 2000 missiles a month?

if we went to war with a peer or near peer opponent, the high tech part would be over very quickly, and so no need for the monthly build. The small number of jets and apache we have would be wiped out probably on day 1 along with most of the oppositions versions.

I struggle to understand how a modern high end war would work, when you consider that most of the gear is so high tech, that it can’t be mass produced. My assumption is it would rapidly revert to a traditional land war.

Sorry to yaw off topic but I’ve often thought about this. I see it panning out so that you want to win by just enough to force some kind of retreat or surrender so you can actually claim victory, whilst not winning by enough of a margin to force a peer enemy to decide to use nukes.

Before that it’s about looking like a dangerous target to attack.

Perhaps the nature of war is changing. Putin’s strategy is to use hybrid and cyber warfare; divide and conquer and get your opponent to turn on himself: undermine US belief in its own democracy and values, provoke ‘post imperial’ UK with increasing incursions into air space and frequent Russian navy transits and outrageous murders, encourage Brexit to break up the UK and the EU, hack the German government computer systems, fuel civil war in Syria and in the Ukraine with ‘volunteers’ aka mercenaries, annex Crimea, divide Turkey from Nato. In Asia Pacific Chinese expansionism and the Indian response are conventional… Read more »

From memory we ran low on smart bombs during the Libyia compain which infuriated obama of all people when we asked them to replenish out stocks. So it shows how pathetically low Uk and French munitions stocks actually are when it comes to fighting a real war. Without the US a conventional war between the EU and Russia would be over in a week.

The Americans have deliberately created this reliance.