The aircraft is no longer visible on tracking services but this is routine for military aircraft.

It appears that this was the cause of the emergency: pic.twitter.com/O8AMVquNE5

The aircraft and crew landed safely.

Do we know anymore about this? Has the Merlin landed safely?

We have fingers crossed waiting for news. Please update us!!

Aircraft and crew landed safely. Thanks for the update.

How on earth does a tyre disintegration happen on a helicopter…..other than on a time expired unit? 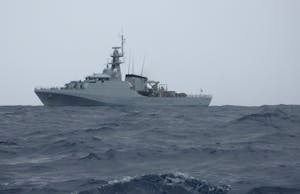 April 29, 2021
Enough doses of the vaccine have now been delivered to Tristan da Cunha to cover the entire adult population.