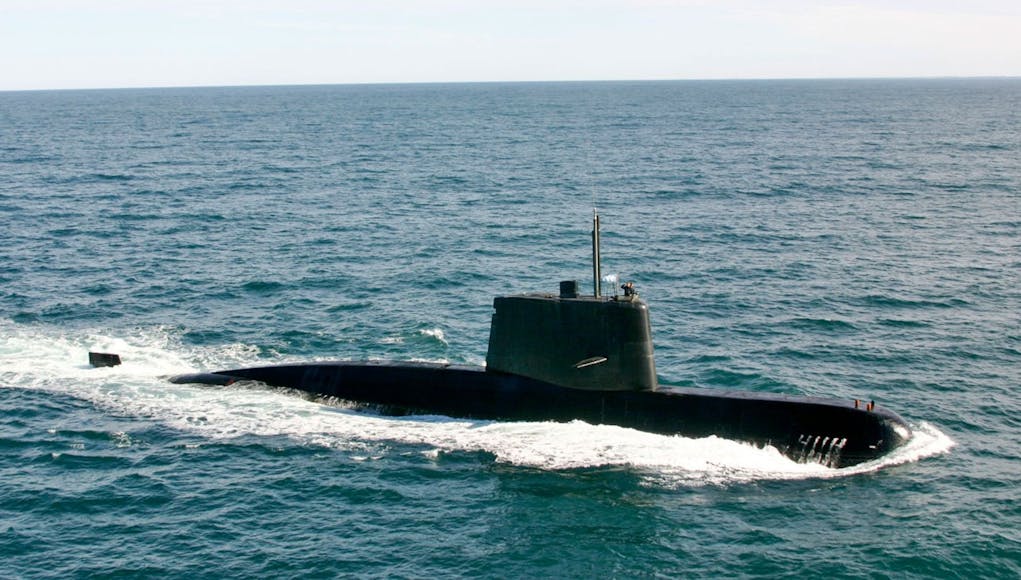 Argentina has announced that it has found the missing submarine ARA San Juan a year after it disappeared with 44 crewmen aboard.

The Argentine Navy said on Saturday that the vessel was detected 800 metres down in waters off the Valdes Peninsula in Argentine Patagonia.

According to local media, an American company named Ocean Infinity that specialises in mapping the seabed was contracted in Summer to continue looking for submarine using its advanced side-scanning sonar and other technologies.

“The hit it received from the seafloor was remarkably detailed, showing an elongated and broken object that measures roughly 60 meters in length—the submarine was 67 meters overall when it was intact—making it a very promising discovery. Remotely operated vehicles (ROVs) have been sent down to inspect the object of interest and the Argentine Navy has confirmed that it was indeed ARA San Juan.”

One year ago, the ARA San Juan, laid down in 1983 in Germany, went missing in the Atlantic with 44 crew on board. The sub was on a routine mission, and its sudden disappearance gave birth to numerous theories and rumours. Rumours largely started by Russian media.

Sputnik had claimed that the sinking of Argentine submarine ARA San Juan was caused by a British deep-sea mine deployed during the Falklands War. The problem? Britain didn’t lay any mines.

Sputnik News is a successor to Russian state-owned RIA Novosti’s international branch which became defunct in 2013. The agency is wholly owned and operated by the Russian Government.

The article suggests that the explosive event registered in the area of ​​operations of the Argentine submarine ARA San Juan was caused by a deep-sea mine “installed at the time of the Falklands War in 1982.”

“In 1982, the British submarines could have placed maritime mines near the Argentine coasts, the mine could remain in the bottom for 35 years, and once a storm disconnected it from the rope, it could have hit the San Juan.”

The thing is, the UK didn’t use any naval mines during the Falklands War.

I hope this brings some solace for the families, though I suspect it will just stir up the usual suspects.

Rest in peace, they were just blokes doing a job same as us

I’m assuming it’s too deep to recover the poor unfortunate soles onboard?

Will it be possible to figure out what happened from the wreckage I wonder?

(Sorry, not meaning to be irreverent. But dear God, spelling these days…)

Lol. They would just swim off. Auto spelling on phone probably.

as a former navy surveyor, i can say that, there will be little chance in recovering the dead, the water temperature and pressures at the depth would make it impossible to ge close enough to the wreck. even professional divers would refuse to enter any sunken wreck, the dangers are too many, the sidescan find is a marvel in itself, it would be interesting to see what side she is lying on to allow a ROV. (remote operated vessel) to make a closer look at the wreckage

I blame auto correct spelling Alex, by the way, you should have a full stop after the bracket. Dear god, punctuation errors these days.

That would be God with a capital G then.

I feel for the poor lads who died in the subs and their families. As you said Brom, they were just doing their jobs.

Bloody typical of the Russians though to try and stir some sh*t. They’d probably love to try and stir up a second Falklands war to take our eyes off of what they’re up to.

True. Though I could see Russia hoping we’d lose a couple of ships from a 2nd war with Argentina, like in the 1st.

Putin’s troll puppets are quick to get online to try and stir things up. This tragedy had nothing to do with mines sowed by the British.

Most of the crew not around during the Falklands, probably, anyway. They will be remembered and respected by all seafarers wherever they rest.

We have recovered submarines from the bottom of the ocean before, the CIA pulled of a half succes trying to do it… we could recover it with today’s tech…

Project Azorian (the CIA project to secretly raise the K-129) was hugely expensive. It was impressive what they were able to do and nice they gave the submariners a military funeral and sent the tapes to the soviets later. I don’t see Argentina having the money to do that though.

You thought you would chuck that crap in there?

Is this about the Russia media or the ARA finding their comrades?

Childish jingoism is a real problem on this site. Devalues everything else here.

It was all part of the story at the time Steve when the Russians tried to blame us for the tragedy. If there is jingoism here I suggest you look east. I don’t think it devalues anything to tell the truth.

I think this site Is only Devalued when someone Chooses to Type their reply, in an aggressive manner. The Internet Has been brilliant In creating a Platform for Anonymous Keyboard Warriors truth be known.

I did feel like there was probably a bit much emphasis on the Russian side for this story. When I first read about the argentine sub there was nothing about Russia on there. The first I’m hearing of it is now. To be fair though, this website posts stories so frequently i wouldn’t really nitpick about this one. Nor would i post to highlight this oddity in this one article, but each to their own.

COULD HAVE, masterful fake news,from the experts.

The Russians, rather worryingly try to stir up the shit constantly these days. They never miss an opportunity, no matter hiw far below the belt it goes.

I think the world just laughs at the Russians. Its hard to take them seriously anymore as most of the information they spew out is ridiculous. Even when confronted with the facts they dig themselves into a deeper and more incredible lie. The biggest loser is Russia as their international reputation will take decades to recover.

The problem is though that so few people actually do any sanity check on the “News” they see on facebook. The things I have to correct people on are ludicrous, but so many people think a lot of it is true. That is what the Russians want. They are simply disrupting and you do not need to dupe that many people to cause disruption and distrust. The oil industry are masters at it with regard to EVs etc…

Does anyone else think it is interesting ARA San Juan was so far away from her last reported position? What was she doing so far out of her reported patrol route?
Something dodgy going on that caused the deaths of 44 submariners. Argentina are not being wholly trueful on this issue.

Is not the idea in warfare or reconnaissance but to outsmart your opponent? Maybe that’s why they were not where they said they were?

Hopefully rov’s can now film and ascertain what was the cause, there will be many clues visible from the condition and state of the external hull. Certainly with Kursk an exterior inspection quickly determined the true nature of her demise, likewise with Affray. There would be little point in attempting to raise her unless there was something worth securing. Hopefully the poor crew will remain undisturbed on patrol as do many other brave submariners.

I can’t see what you could possibly deduce from looking at an imploded hull. Even if you were able to look inside you wouldn’t know if there had been a leak or control problem.

There are a lot of 209 submarines if a similar age still in service around the world so I think there will be a lot of interest to see what caused the incident as many of these subs are likely we’ll passed their service lives now.

San Juan is not a 209 family, although being German. There may be some commonality, but the design is TR1700 class.

There is a whole science of underwater shock effects, external anaylsis can determine the order of collapse, the degree of pressure involved, whether an internal explosion lead to an implosion, difference between crush damage and explosive damage et…..without doubt Rov would also enter the hull to inspect. Kursk was in shallower water and raised for security reasons regarding her weaponry, likewise the CIA attempted to raise the Hotel boat for access to her weapons. Thetis was a new boat in very shallow eater and fit for further service. This class are elderly and successfully operated in various countries, I think… Read more »

Abilty to cut, saw, attach lines… If nothing else be able to cut out samples of steel for analysis.

I must add an I cannot edit on this site : operator error connected to maintenance issues. Ie human factor involved failure. Not design failure.

Hopefully they will discover it was an explosion and the crew died instantly, otherwise a truly horrific way to die All these peace time accidents recently, does make me wonder if the military of the world is cutting back too much. Ok Argentina is short on cash and probably cut repairs/maintenance but Norway is not and that could easily happen to any navy. With such small hull numbers these days, and complicated builds, losing one of our astute or destroyers would be a pretty significant loss and for sure it would not be replaced, all that for cutting a few… Read more »

After the loss of H.M. Submarine Thetis in 1939 the somewhat eccentric scientist J.B.S. Haldane had himself locked a steel cabinet so as to reproduce the conditions of being trapped in a sunken ship. His report – that one becomes calm and sleepy – helped the families of those lost in the disaster.

Unfortunately, like most experiments it doesn’t really stack up with real life. Firstly he knew we wasn’t going to die and so that part of the equation was removed and secondly its the part upto hypoxemia where the nasty part would be, the days during which they would have supplies but knowledge they were out of luck.

It certainly helps the families to believe it, but like the heart attack in the sleep being painless, it isn’t really true unfortunately.

I am hoping for an explosion and fast death.

Rest in peace. On the Russian Troll issue: they are doing a job too. Not pleasant but information warfare is as old as war itself. Ignoring their lies is a good star in any defence.

Does the UK have the capability?

I know we have the NSRS at Faslane, can this dock with that type of sub and does it need the assistance of alive crew inside to open?

Would be a fantastic gesture and major Brownie points internationally and with the Argentinean people themselves if Britain did this. And for purely compassionate reasons the right thing too.

I’m afraid that the Depth that she was found would totally rule out any Help from her Crew. These Subs have a Crush Depth much less than 800 metres. As do most.