The Ministry of Defence have spent just over £900,000 on social media advertising it has been revealed. 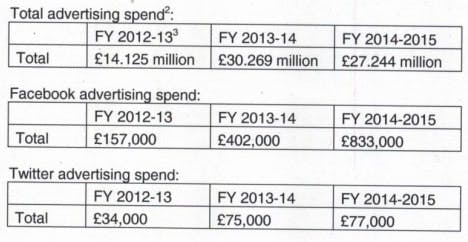 The MoD say that the “vast majority” of this money is spent in direct support of Armed Forces recruitment campaigns.

The Freedom of Information request response can be found here.

I see no problem with this. MoD has an advertising budget. Shock…horror. Next stunning revelation, the Royal Marines have an advert on TV.

Thanks for the input there, valuable stuff.

UK Defence Journal It wasn’t direct at the journal, more the inevitable Daily Mail whingers that will arrive soon enough.

AKA ‘could have used the money to keep the harriers’ crowd.

Fair enough. We just think it’s important information, seeing how much they spend compared to the effect it’s having.

UK Defence Journal Agreed. And as social networks continue to monopolise time spent on the Net, it is quite likely that marketing budgets will shift over time to where the audience is.

And allows that appalling RN sailor recruit training docujoke to be screened on C4.

Why is it a joke?

Have you seen it?
It sets out from the start to present both the RN training staff and its recruits as misfits and buffoons. Even repeatedly plays snippets of silly scenes to comedy music in the opening title sequence of each episode. It has made the Royal Navy into a complete laughing stock.

Paul, this figure does not include that programme which by most accounts is reasonably well received.

A lot of people look at it.so it’s probably a good Idea

I think most people who have actually seen this programme would either not want to join up / have a relative join up, or if current / ex serving members would be running for cover in embarrassment.
Just my opinion, but judging by the many reactions on several other forums, one fairly commonly held.

The way social media is, id rather wish the MOD would recruit hands on rather than with exciting look pictures with soldiers in action with a phone number attached to it…

When i was a young man, we’d often get to speak to a soldier in school, or at an organisation such as Scouts. You get to speak to someone rather than guess at what its like to be a soldier.

I could be wrong and perhaps they still do, but with the dwindling troop numbers and the increased pressure on our reserves/TA i doubt its the case anymore.

That’s a bargain! In this day and age a reputation can be destroyed in the space of a few hours on social media. All for the price of one missile.

I am unsure why the forces are having difficulty recruiting. Why not approach sitting MPs to ask their children to volunteer, unless dying in foreign realms is only for the likes of the serfs of course!?