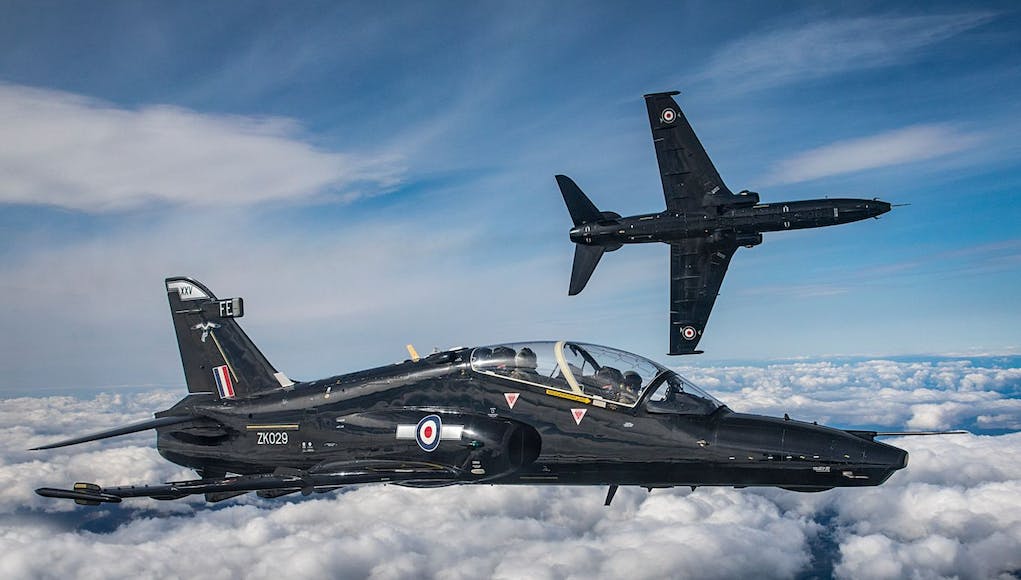 The Hawk T2 aircraft will leave service in 2040.

The Hawk T2 trainerejt includes modern LCD displays instead of conventional instrumentation and is powered by the Rolls-Royce Adour 951 engine. The RAF say that the Ministry of Defence awarded a Design and Development Contract to BAE Systems on 22 December 2004.

The information came to light via a Parliamentary question.

Mark Francois, Member of Parliament for Rayleigh and Wickford Commons, asked via a Parliamentary written question:

“To ask the Secretary of State for Defence, what plans he has to replace the Hawk T2 aircraft in RAF service; and what the planned out-of-service date is for that aircraft.”

Jeremy Quin, Minister of State for the Ministry of Defence, responded:

“The planned out of service date for the Hawk T2 aircraft is 2040 and there are no plans required yet for its replacement.”

The HawkT2 is a trainer aircraft. According to the RAF website:

“The aircraft’s glass cockpit and comprehensive avionics suite provide a realistic advanced fast jet training platform which, as part of the UK Military Flying Training System (UK MFTS), meets current and future standards.  It allows trainees to be immersed in more complex tactical environments, ‘downloading’ training from the OCUs onto the Hawk, which is far more economical to fly than the Typhoon or F35.

The Mk 2’s avionics enable simulations of many of the functions of a modern fighter, combined with an extensive mission debrief system that extracts maximum output from every sortie. Via the aircraft’s data link, for example, synthetic radar returns are generated for intercept and basic fighter manoeuvres training, yet no radar is fitted.  The on board simulation capability also enables air-to-ground ‘weapon drops’, realistic electronic warfare (EW) training against surface-to-air missile (SAM) systems and other complex operational scenarios.” 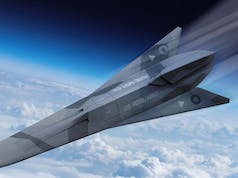 Concept shows British strike drones based in the stratosphere 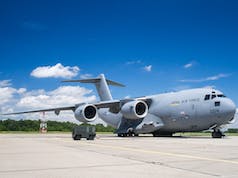 British C-17 and Chinook fleets to be upgraded 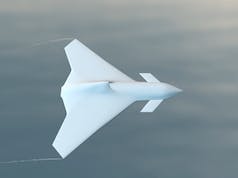 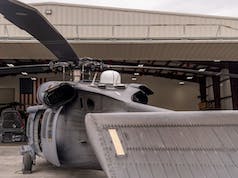 ‘No plans’ to fit refuelling boom system to Voyager 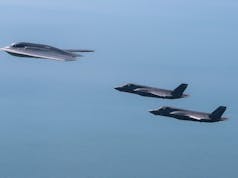 B-2 Stealth Bomber on exercise over the North Sea

This far out the date is bound to just be a place holder. Could easily go longer or less likely come forward.

This forces the question of what would they be replaced with and is there a role for them in twenty years?

Rob
Reply to  Mark B

I bet they are replaced by simulators. SEGA will get the contract.

With visual headsets by Google

Sega and Google combined, now there’s a nightmare recipe for the inevitable poor man solution the MOD will find oh so appealing.

Bae need to seriously up their game with regards to jet trainers, or they will be out of the market as the Red Hawk takes all the share.

They had a great product, but appear to have missed the boat by not investing in its replacement. Probably waiting for a government funded programme instead of getting ahead of the game.

Most training will be simulated, but there is still the need for actual flying (and selling these jets to lower grade airforces)

Agree, simulators are great for learning process, checklists, systems etc. Nothing replicates doing it in a real cockpit though with the physical demands and disorientations. Not that anyone in the MOD has been within touching distance of a cockpit mind…

I don’t think you realise how far simulators have come. They can be networked together from different bases, and can replicate highly complex scenarios. Pilots at this stage are already experienced airmen, and have plenty of experience with the actual flying. They have simulators on board the QE so F35 crews can practise before taking a real jet up into the air. Saves a lot of time, maintenance hours, and flying costs.

only issue with this is, the pilot has already done his wet training. before getting into the sim.

Typhoon force use simulators too. Crews at Coningsby can fly alongside or against crews at Lossiemouth.

They also use simulators to practice using new upgrades to the aircraft, and new/improved symbology for the displays after software drops. New weapon profiles ect. Typhoon & F35 development is constant, so the new upgrades are loaded into the sim software, so when the pilots jump in the real thing, they are up to speed,and ready to go. Back in the Tornado/Harrier/Jaguar day’s, this was simply not possible. And flying hours would be wasted just to get used to a new HOTAS configuration.

To me the main problem with simulators is the human being. You can’t simulate the threat to human life of doing risky turns etc, as in the back of the mind the pilot knows that if they screw up the worst that is going to happen is they fail the course, zero risk to their life. Real combat relies on life/death decisions being made in the moment and overcoming the fear effect of making the wrong decison or panicing and making no decsion

By the time student pilots are flying the Hawk they are already professional airmen. They have rules of engagement and safety procedures in place, so aircraft do not get to close to each other in BFM. and altitude hard decks so they don’t fly into the ground. Simulators or not going to 100% replace fast jet training. And the Hawk T2 is going to be around for many years to come. I wouldn’t lose any sleep over it.

Not to mention G forces and control of blood flow required whilst training to perform a manuaver.

Does a simulator replicate G Force?

So virtual has no chance with reality

Simulators are not replacing real aircraft. But are a very useful tool to aid training. Times move on.

A simulator cannot give you the real world application of the actual aircraft. There is no ‘g’ in a simulator. There is no realistic feeling of consequence for a pilots decision making process. And there are no dual control F35’s or likely to be Tempest, if it ever happens. So no way of learning those sensations before the first solo. Simulators are good, there’s no doubt about that. But they are part of a suit of tools. NOT the only tool.

I haven’t said simulators will replace training aircraft. And pilots are professional airmen long before they sit in a F35 or Typhoon, and are more than accustomed to the rigours of flight.

Across all the user services hundreds and hundreds of pilots have been very successfully trained on the F35 via simulators. The F35 has one of the best if not the best accident rates of western fighters. So something is working well.

No they are not! Experience comes with further advanced training to prepare them for greater demands to come. Next you’ll be advocating their mobiles instead of doing it for real.

Did you even read my comments?

I’d take a look at RAF training if I was you.

This is so indicative of British Industry as a whole, if they don’t produce rubbish they far too often produce wonderful products that go on so long that by the time they start to think about a replacement they are too far out of the technological loop to compete with overseas competitors. And nothing defines this more than these sort of military projects and everyone is additionally waiting on the Govt to pull its head out of its ass. But that is no excuse for Bae not doing so instead milking its existing product well beyond its sell by date… Read more »

Yep the article states MoD paid for the design and development of the T2. Training jets are now products not bespoke designs. BAe have failed to reinvested in the profits from the Hawk instead relied on government to fund improvements.

So BAe should had remained a state owned company then?
The profits from the developed products.
would have returned to the government.

To be fair to BAE, they were showing off an improved Hawk, with ideas they developed for a potential sale to India. Could have been a T3 Hawk, had the UK government wanted it.
I fear the retirement of the Hawk is a cut spun as progress.

ZJ951, an improved Hawk demonstrator, BAE was promoting in 2019. It had a cockpit which could have been made similar to an F-35. As there is no 2 seat F-35, a Hawk with a similar cockpit would have been a great lead in trainer. Also had a modified wing that allowed higher angle of attack, again better to mimic agile front line fighters. Thanks to work done for India, it had the option of using precision weapons such as Brimstone & Paveway IV. A great shame some Hawk T3 were not ordered for RAF.

“Bae need to seriously up their game with regards to jet trainers, or they will be out of the market as the Red Hawk takes all the share.”

No plans for it’s replacement… Not encouraging considering how long it takes the MOD to get anything more complex than a tin opener into service. That’ll be another capability holiday to look forward to.

You would have thought that someone in BAE systems and the MoD would look at developing a trainor to support both the F35 and hopefully Tempest. Regardless of whether the future if unammed or not we still have many years ahead of manned fast jets. Come on BAE and MoD pull your finger out – does every procurement programme have to delayed ad infinitum. As an aside I thought there was a joint venture advanced Hawk programme demonstrator with Hindustan Aeronautics (HAL). What happened to this and what was its capabilities?

too late its called the Red Hawk, and BAEs been sat on there arses and not designed a airframe in how long.

Very true. It’s like most big companies they wait for UK government to show an interest and fund rather than developing a concept and pitching it to the MoD.

I’m pretty sure the bosses at BAE discussed this years ago.

Aeralis is designing a revolutionary “convertible” jet which can be reconfigured for a variety of roles by swapping out parts , (from the telegraph) is being mentioned as a possible replacement.

I like the concept but they need to bring some big companies on board like Rolls-Royce and BAe.

Right now it is only vaporware.

OSD’s are fairly arbitrary when we’re talking about a relatively young bit of kit. Could easily be extended with an upgrade or brought forward if we decide we can use simulators for 100% of the advanced jet training.

The main issue with unmanned replacements for Minesweepers and simulators substituting for aircraft such as Hawk, is that in both cases you lose substantial secondary roles-eyes and ears and lower end attack/defence capabilities

My worry with unmanned platforms is they will be seen as fair game in areas where there high tensions but no conflict. The precedent has been set by Iran already taking down a US drone flying in international airspace.

Simulators are fantastic: they really are. Except if you crash one – you still get to go to the canteen for a cup of tea afterwards.

Simulators are great but only as lead in to actual fly in. I think these lines form Aliens all the way back in 1986 say it best:

Ripley:
How many drops is this for you, Lieutenant?
Gorman:
Thirty eight… simulated.
Vasquez:
How many *combat* drops?
Gorman:
Uh, two. Including this one.
Drake:
Sh*t.
Hudson:
Oh, man… 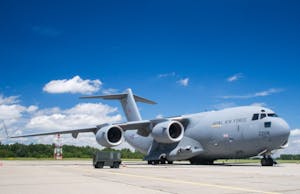 British C-17 and Chinook fleets to be upgraded

September 12, 2021
British Chinook helicopters will be enhanced with state-of-the-art defensive systems while C-17 Globemaster aircraft will receive a software and hardware upgrade.

B-2 Stealth Bomber on exercise over the North Sea