In a Prior Information Notice published this week, the MoD announced it is seeking to develop three new directed energy weapon demonstrators.

The MoD is looking to develop laser based and radio frequency based systems.

The purpose, say the MoD, is to explore the potential of the technology and accelerate its introduction onto the battlefield.

“Laser and Radio Frequency technologies have the potential to revolutionise the battlefield by offering powerful and cost-effective weapons systems to our Armed Forces. This significant investment demonstrates our commitment to ensuring our Armed Forces operate at the forefront of military technology.” 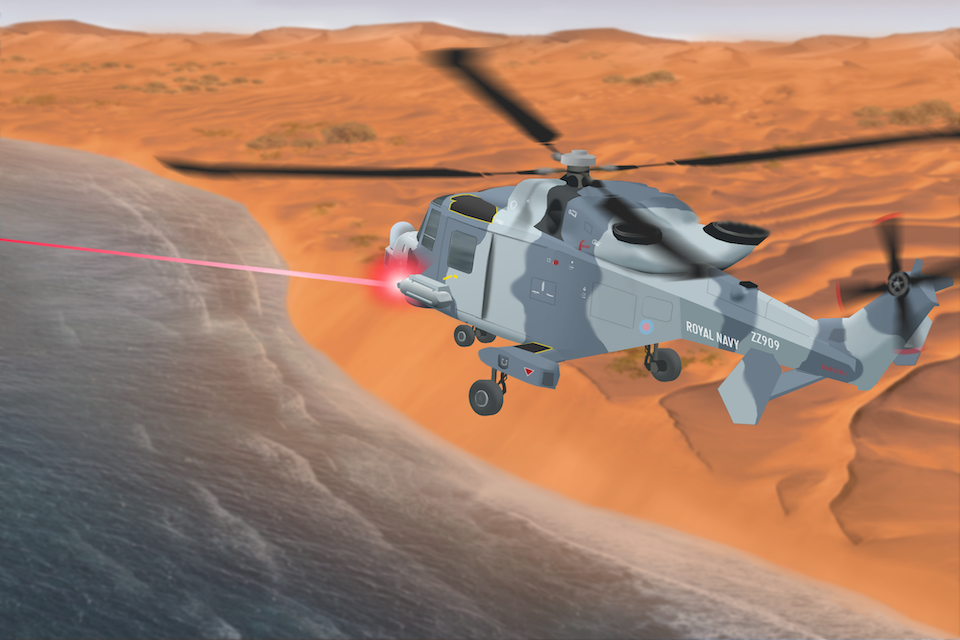 The new systems are expected to be trialled in 2023 on Royal Navy ships and British Army vehicles but, once developed, both technologies could be operated by all three services.

“The Armed Forces will use these exercises to get a better understanding of DEW, test the systems to their limits and assess how they could be integrated with existing platforms. The MoD aims to invest up to £130m in this package of Directed Energy Weapons, including the construction of the demonstrators, the creation of a new Joint Programme Office and the recruitment of personnel to manage the programme.”

These demonstrators are part of the MoD’s ‘Novel Weapons Programme’ which is responsible for the trial and implementation of innovative weapons systems to ensure the UK remains a world leader in military technology. They are expected to reach the frontline within 10 years.

The MoD already has plans for initial trials of laser weapons systems, with the Dragonfire demonstrator commissioned by the Defence Science and Technology Laboratory to be tested later this year.

I read somewhere that the RN is investigating flywheels as a way of storing energy for laser weapons.

These pictures look like something out of MS paint. You’d think these companies would do better!

This is all coming together nicely. Now that Rolls Royce have built a self contained power supply system for lasers over 100kW, which if paired with a flywheel energy storage offers a viable solution to powering weapons greater than 150kW. Funny how the top picture looks like the tail end of a T26 with the laser mounted above the hangar. What is new is that the DS mentions RF direct energy weapons as well as lasers. This could be anything from nuisance weapons like microwave emitters used for crowd control, to using a ship’s radar as either a weapon or… Read more »

Watched that recent documentary on drone defence systems and noticed they are working on combining both, depending upon the threat and that they can work to compliment each other in terms of tracking and targeting. I can see similar logic for these sort of weapons (and likely others) certainly while they explore the potential.

I can see this work for ships due to their size, but remain skeptical for land vehicles and planes. These lasers need a massive power source and storage to deliver the energy instantly, and follow on shots. On a truck maybe, but not on front line vehicles like a tank or ifv. And forget fighter planes they need to light. If its just a laser to shoot down little drones, bullets, jamming, mini frag missiles or decoys would seem to be cheaper and feasible alternatives

Agree, if you look at the size of the power supply unit Rolls Royce have produced, it’s the size of a small shipping container (probably deliberate). However, this is what’s required to power lasers greater than 100kW such as Dragonfire. But more importantly, to enable it to fire more than one shot in quick succession. It may be possible to charge up a bank of capacitors and fit them in the cabin of a Wildcat. But what’s the point, as it will only enable a single shot? We are definitely still some way off being able to field a laser… Read more »

I’m sure the power supply size will reduce year on year to match the needs of the devices and where they will be situated. Where there is a will (and money) there is a way. Just look at mobile phones.

We are certainly on a 25 year plus programme here in terms of aircraft that will develop laser Capability with the longer term goal of weaponising them in a managable manner. Rather like self driving cars whatever the claims, it will be a series of gradual steps that get closer to the final goal a long time into the future. But I’m sure we have progressed from the 747 in terms of viable flying laser weapons so there is progress and now that there is a need for such high energy power sources progress will be heightened no doubt.

From what I have seen bullets are suprisingly useless in dealing with drones certainly unless used gattling gun style. The others may be better options mind.

Hehe, but it is a good idea for the future. Potential unlimited ammo with renewable power supply or some type portable micro fusion reactor
Unfortunately we need to make some serious progress on portablity before this can be fielded

A lot is misunderstood about how DEW work as the waveforms used can vary considerably but are usually in a pulse form where the peak power is the critical value. An air defence radar is a very useful tool to have for EW due to its immense peak field strength, steerable beams and effective range and that’s where physics comes into this, the range is limited by a combination of power, antenna gain and atmospheric factors. These weapons are being used in all theatres but power and portability are always the issue but ships have a distinct advantage. The Zumwalt… Read more »

Why not take the $130M and buy a good chunk of Type 31? Laser weapons are nowhere near powerful enough to be practical CIWS. The UK has a pattern of investing in the development of cutting edge systems and then buying handfuls. Spend the money on what’s needed; personnel, escort ships, afv upgrades and F35s.

Because laser weapons are clearly a cost effective and versatile future weapon system that we need to invest in before we fall behind?

Imagine if Admiral Fisher had just gone “you know what, this “dreadnought” thing is just too pricey. Let’s stick with our classic battleships”. Same thing about muskets to rifles, or guns to missiles. Buying more assets would be fantastic, but pointless if we don’t keep up with the pace of technological development

I’m more concerned as to whether this is a viable defence against hypersonic missiles like Zircons. At the moment we seem completely at their mercy.

You can’t beat the speed of light.

Yeah, but will they be able to open the pod bay doors?

if the iranian mullahs do kick off, then i hope this kind of work will be accelerated.

does all this mean that dragonfire has been abandoned?

Laser weapons at sea level have drawbacks. Spray and mist diffuse the beam reducing the power and effective range. Still worth having but you wouldn’t replace your conventional self defence weapons systems.

I presume what they mean by RADIO FREQUENCY is a MASER [ MICROWAVE AMPLIFICATION by the STIMULATION of RADIATION]. Jounro’s usually seem incapable of distinguishing between the two! MASER Technology seems to me a far better bet than LASER [ LIGHT AMPLIFICATION b the STIMULATION of RADIATION]
MY! We’re going way back to the roots of RADAR which was a by product of, would you believe, an attempt to invent a DEATH RAY.