The National Audit Office have released a report titled ‘Carrier Strike – Preparing for deployment’, the report examines the MoD’s management of the programme since 2017 and the risks towards achieving Carrier Strike’s full capabilities.

According to the NAO, as at April 2020, the MoD had two new aircraft carriers and 18 Lightning II jets. It has conducted sea trials to ensure its new aircraft and helicopter fleet (including those used for Crowsnest) can operate safely from the carriers.

“The Department expects to have an initial Carrier Strike capability by December 2020 and is working towards its first operational deployment, with the US, in 2021. Its next milestone is to achieve full operating capability for Carrier Strike in 2023 – at which point it will be able to support two UK Lightning II squadrons (up to 24 jets) from one of the carriers. The Department’s longer-term aim is that, by 2026, it can undertake a wide range of air operations and support amphibious operations worldwide.” 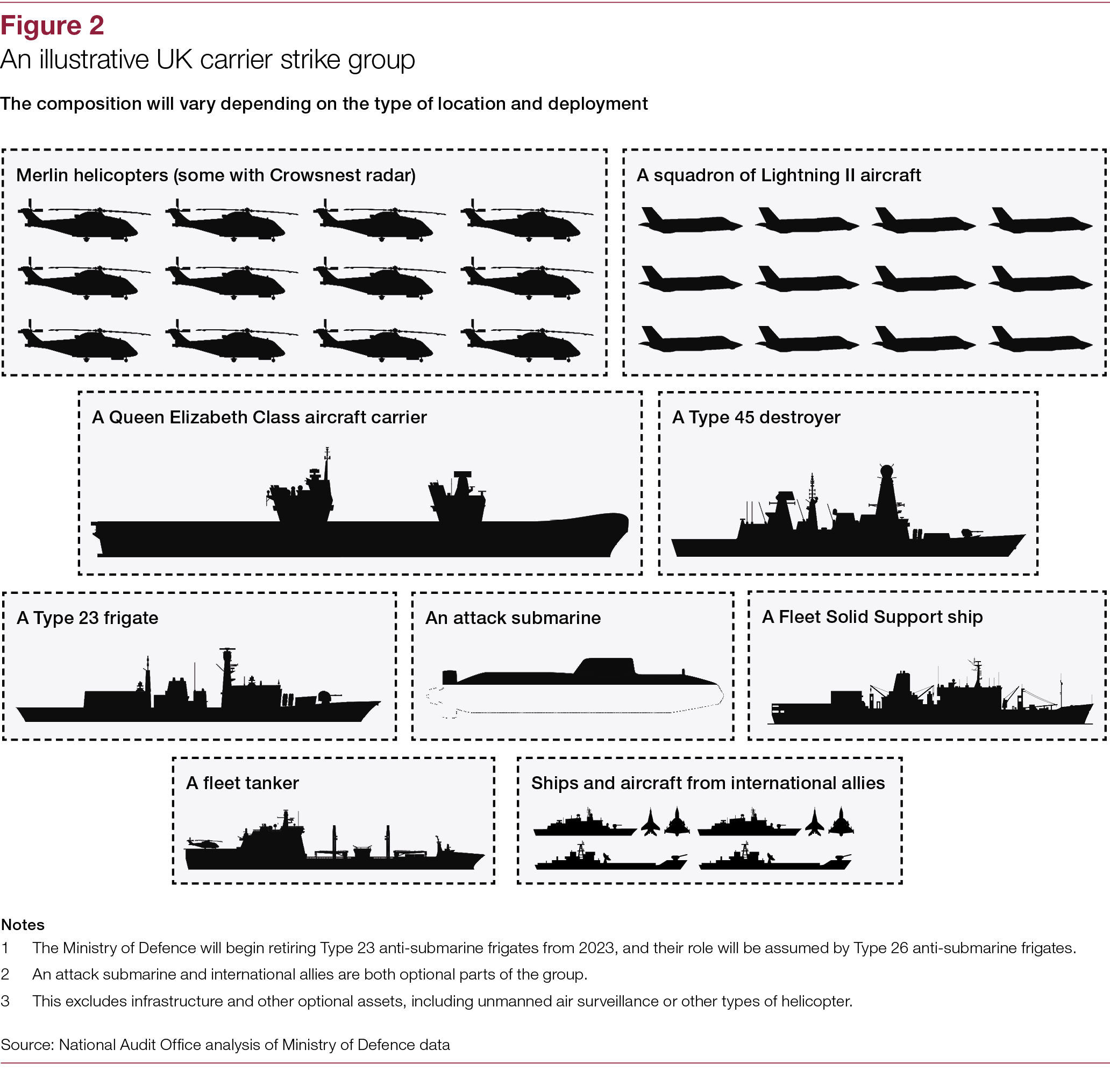 “The Department has made considerable progress since 2017. It has built two new carriers in line with its overall timetable and at a forecast cost of £6.4 billion, which is £193 million (3%) above the revised budget agreed in 2013. It has successfully applied lessons from building HMS Queen Elizabeth to HMS Prince of Wales and has accepted both aircraft carriers into service. As at April 2020, the Department had spent £6.0 billion on the Lightning II project and received 18 jets, in line with its delivery schedule.2 It has also completed the infrastructure necessary to berth both carriers simultaneously at Portsmouth, and most of the facilities for the Lightning II jets at RAF Marham.”

Background to the report

Carrier Strike provides the ability to launch fixed-wing aircraft from a ship to undertake a range of military tasks. It is central to the government’s plans for the country’s armed forces and the first step towards Carrier Enabled Power Projection (CEPP), which is the government’s ambition to be able to respond to conflicts and support humanitarian relief efforts anywhere in the world at short notice.

Carrier Strike will be based around two Queen Elizabeth Class aircraft carriers – the largest warships ever built for the Royal Navy – together with Lightning II jets, which are being bought through the United States Department of Defense’s international programme. The Ministry of Defence (the Department) is also buying a new airborne radar system, Crowsnest, to help protect a carrier strike group. Depending on the type of deployment, the carriers will be accompanied by at least one destroyer, an anti‑submarine warfare frigate, and ships for support and resupply.

“Since 2011, we have reported four times on the Department’s progress on Carrier Strike. Our early reports covered the decisions about the type of carrier and jets that the Department bought. In 2017, we highlighted that the phase to 2020 would be crucial and there was little room for manoeuvre in the delivery schedule. In this report, we examine how the Department has managed the programme since 2017 and how it is addressing the risks towards achieving the full capabilities of a carrier strike group. We set out:

Our report focuses on the Department’s approach to addressing the risks to achieving the capabilities of Carrier Strike. We do not evaluate the military or wider capabilities that Carrier Strike will provide, or the plans for its operational use.”

You can read the report here.

The most important things have not been mentioned, i.e. do the toilets work and is the canteen open.

This represents something of an upbeat report from NAO on how MOD/RN and industry has worked together to deliver a clear sighted and efficient maritime capability, once freed from political dithering. Maritime has to be the UK’s primary offensive focus, so time MUST tell that this excellent groundwork continued to full fruition over the coming decades.
Sadly, it appears that such forces will as like as not to be involved in a serious peer confrontation before too long – unless our resolve clearly demonstrates that we will answer intimidation with intimidation and thus deflects any such ultimate showdown.
Regards

I was under the impression a carrier strike group would have 2 frigates and 2 destroyers as a minimum, not one each.

You would think that wouldn’t you. I’m assuming we will borrow ships from France, Netherlands and the US.

If we get into a Falklands situation again we will not be able to rely on any of them.

Meirion X
Reply to  Mark B

Yes, and out of NATO area, again not so many available!

Its going to be pretty fluid depending on what they’re doing. I’d guess one anti submarine and one anti aircraft escort will cut it most of the time unless we have some news that things are going to go Pete Tong. They could put 3 of each, a couple of SSN’s and a screen of GP frigates and OPV’s round it….. possibly…..

In actual combat enemies have a really annoying habit of sinking our ships, so once 1 escort is sunk, the whole strike group is basically a liability with either ASW or area air defence crippled. So 2xDDG & 2xFFG, as previously assured, is what it should be.

Thanks for clearing that up Frank, its this kind of insight that we need more of on here…..

It is, when it’s first active service mission.

Does anyone know why our carriers don’t have their own missile defence systems like the Italian carriers for example which carry the aster.Are the phalanx better at defence then the aster?

The general idea is that the escorts provide the capability. Phalanx is a CIWS that acts as a last resort if the missile defences have failed. But there is certainly an argument for better defence systems on the carrier’s themselves

The main reason is to save money, second reason is missiles leave debris on the deck that has to be inspected so not to blow a tired on an F35. In theory we don’t need them as the ship will be protected by multiple destroyers and stay out of range of land and sea launched anti ship missiles. Its greatest threat will be subs.

Presumably you only launch on basis of imminent incoming missile threat which hasn’t been dealt with by other layers. (type 45 disabled by sub… Type 26 off chasing Sub. Token type 31 at side of QE class exhausted 12 x camm dealing with first salvo of missiles launched from just 2 aircraft.

You accept the debris consequences of such on incoming threat.

Assume QE class will get fitted with lasers once ready.? What effective range?

One of the primary reasons is Foreign Object Debris (FOD). Missile systems will leave a smoke and debris trail, both of which can interrupt flight operations – particularly nasty on a floating airfield. FOD can be injested into engines, damage tyres, and severely injure or kill crew members. You’d have to halt operations and conduct a full sweep of the flight deck before operations can resume. That’s not ideal if you need to launch or recover aircraft in a hurry. Similarly, you also need to factor in where to put them, how to protect them, how to ensure they don’t… Read more »

Lusty – Everything you say is correct but those reasons don’t prevent other Navy’s Carriers from having a Missile Armament. The Royal Navy even has the luxury of the perfect System for the job (SeaCeptor). Hopefully over the lifetime of the Carriers there will be a change of opinion.

Indeed, but the OP asked for some of the reasons why they weren’t fitted. I tried to provide some. Undoubtedly, the driving factor is cost & time, rather than the operational aspects such as space, FOD, ballistic protection and loading the silos. These are all things the RN and design teams can overcome. The UK has always led the way in carrier design, so I see no reason why we couldn’t come up with solutions to mitigate or eliminate the issues. To me, the carrier represents a £3bn floating airfield. In full service it will be carrying an additional ~£2bn… Read more »

Could they not have designed a small platform part way down the hull to house a SAM system on either side of the ship?

Could be reloaded from inside the hull, smoke would still be a slight issue obviously but debris would simply drop into the water below.

The first practical laser guns are now bring tested on warships. A UK one is due to be tested this year outside in the open air.
So not too far down the line, expect to see deployed on carriers.

As Paul says, other nations carriers have them & our Invincibles had Sea Dart SAMs, so that’s an empty reason for not having them. You don’t see any like;ly opponent’s carriers without SAMs. It sems to me our own government could be as much a danger to our crews as the enemy seeing as they refuse to provide adequate weaponry or hulls.

Again, phill asked for reasons why they weren’t fitted. I provided them, and even mentioned cost & time. See my above reply, but this is undoubtedly one of the main reasons why they weren’t fitted. I’m not sure what you’re referring to by an ’empty reason’, but it’s clear Sea Dart was removed for very valid reasons. Trust me, they wouldn’t have done so if there weren’t valid reasons. The danger we have is designing and operating ships without certain features *just because* the previous ships *didn’t* have them. Fit the darn things I’d say. The lives of the crew… Read more »

Sea Dart was removed from the Invincible class to increase flight deck space and below decks stowage for kit associated with operating the Harrier GR9.

Thanks for that Paul. It still remains that we were happy to fit it to a carrier & the debris argument is a recent excuse.

Yes we were, and the debris argument, although a valid one, doesn’t really hold up. If your carrier finds itself in a position where it has to fire SAMs to defend itself, flight deck debris is going to be the least of its worries. Defence funding is a huge problem in the UK, we go for the bare bones and cheapest options on a regular basis, there is no way the QE class should be going to sea without self-defence SAMs, the Type 45s are great, but they can be disabled and sunk……

Fitted For… and ‘fewer but better’ are both dangerous phrases, as it means that assets are left with limited defensive options and fleet numbers will be severely impacted should one be sunk in action.

Penny pinching in the first instance(USN Carriers & LPH have ESSM & RAM SAMs plus Phalanx; & in the 2nd instance NO-Phalanx is a very short range(c.1,500m effectively) last ditch defence wheras both the Aster & Sea Ceptor have much greater ranges of c15 miles.

That should be two destroyers & two frigates per CSG. The carriers need more self defence also, at least a SAM. Up to date ASMs for the escorts(not obselete Harpons), ASMs for the F-35s & some Wildcats with Martlets & Sea Venom or a few Apaches.

Allied help is great but we should always be prepared to operate on our own in case circumstances force us to.

At what point would an SSN be “optional” as the graphic on this article suggests?

Having an SSN lurking has got to be one of the biggest deterrents to enemy vessels coming too close to the CSG?

I think the current numbers of (operational) SSN’s make it more ‘optional’. I’m sure for the headline grabbing first deployment we’ll pull the stops out and have a full ‘bells and whistles’ Task Force, knowing how things work though, I can see us going with a nod and a wink that there’s an SSN rather than one being designated.