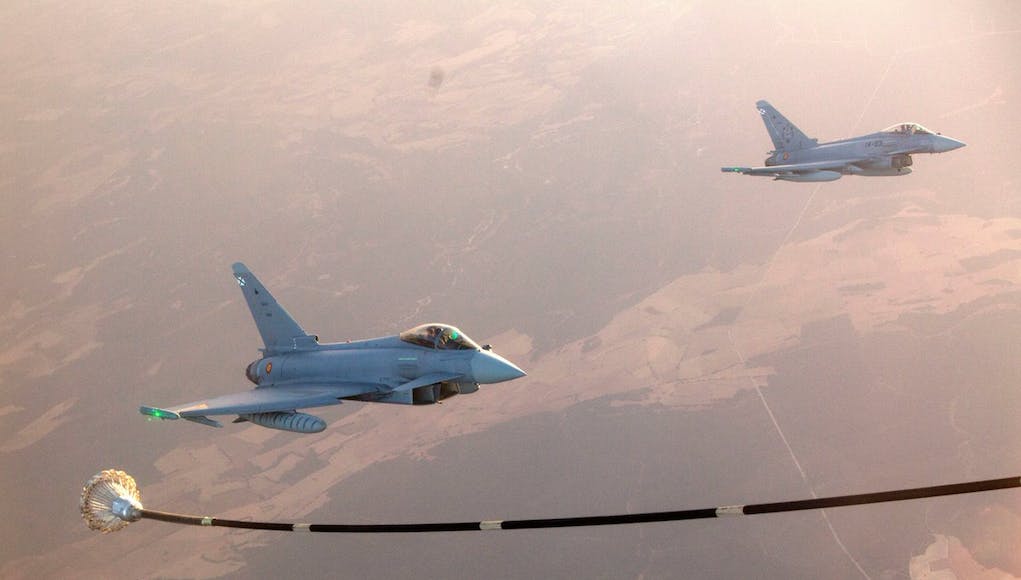 NATO and the European Union co-organised an air-to-air refueling conference in Brussels.

NATO in a release regarding the event say that Air-to-air refuelling is a critical capability for NATO, as increasing the ability of Allied planes to fly for longer periods and farther distances has a direct bearing on the Alliance’s ability to defend its citizens and territories.

“Air-to-air refuelling is part of the ever-closer cooperation between NATO and the EU, who are working together to increase European capacity in this area,” said Camille Grand, NATO Assistant Secretary General for Defence Investment.

“Together with the Netherlands as the lead nation, the European Defence Agency, and several other Allies and agencies (the Organisation for Joint Armament Co-operation and the NATO Support and Procurement Agency), NATO has facilitated the procurement of a European multinational fleet of multirole tanker–transport aircraft.

Consisting of eight aircraft, the fleet is scheduled for delivery between 2020 and 2024. The planes can be configured for air-to-refuelling, the transport of passengers and cargo, as well as medical evacuation. This is a good example of effective cooperation between NATO and the EU in the delivery of critical capabilities and helps address a well-identified capability shortfall.”

With around 150 participants from more than 20 countries, companies and associations, NATO say that the conference provided a timely opportunity to coordinate efforts in this important domain.

This was the first air-to-air refuelling conference co-organised by NATO and the European Union.

Nice to see other nations finally taking some of the burden of air to air refueling off the USAF.

The RAF has always carried out it’s own Air to Air refuelling, has also refuelled US Marine and US Navy aircraft.

Which nations actually need this facility? The UK has it already, don’t know about France, but can’t think of any other European nation that has a need – Russia is the main European threat andEuropean nations are close enough to Russia to fly there and back without refuelling. It’s only countries with major overseas like te US, UK and France that need air to air refuelling.

Agree and disagree, as all NATO members should contribute to the various capabilities. I agree that some countries can, and should, specialise in capabilities they already have, and I have mentioned this in the past, but with force multipliers and enablers, such as AAR, then all should contribute, in some way.

Just because a country is close to Russia, it doesn’t mean it doesn’t need AAR. combat air patrols as an example require AAR so aircraft can stay on station for many hours. AAR is a critical force multiplier, no natter where the combat environment is in the world.

They are members of NATO so they should contribute. Location shouldn’t and doesn’t matter. Every country has sky over it! Every country contributes ( some less than others I must say) to overseas operations, therefore all should take some of the load off.

Only if needed. There is no reason for European countries to contribute against China in the Pacific – look to Japan, Australia, SK and Taiwan for that. By your view, Germany, Turkey, Spain and Italy should also have nukes to contribute. We’re talking about about specific items here – and I don’t think most European countries need that particular one. Countries have airfields – over teir own countries they don’t need refuelling, may even be counterproductive as it could lead to aircrews spending too long in the air for combat effectiveness!

We will have to differ on this one, as collective Defence should mean collective Defence, not selective Defence. No one said to contribute to forces in the pacific against China as that is not a NATO concern at this time and out of the European sphere of influence. You are being a little bit picky, to make a point. To many so called European NATO members like to do “collective” Defence on the cheap and you can understand why the yanks are getting pissed off providing pretty much 90% of NATO hardwear and capabilities. I am a firm believer however,… Read more »

Actually we agree on virtually everything except the need for one specific system and the overall need regards Russia – my view is the non-nuclear European component of NATO is actually strong enough to face Russia anyway as I think that a lot of Russian ‘strength’ is bluff (based on economics). But you’re right, we aren’t going to agree – which is good, bad thing if everyone agrees with everything. All the best to you.

We do agree on that for sure, Russian Defence posture and abilities are a big bluff! But we need a bad guy to justify Defence spending, and while they are certaintly a threat, that threat will only become a reality if their social and domestic issues gives Putin and his acolytes enough concerns that the people of Russia become a threat to them! And, possibly, if NATO shows itself to be divided and weak, those two things, to a gambling man, could be worth the risk! Cheers.

If the thinking broadens from fighters to command, support and logistics, air refuelling is vital for search and rescue as well as humanitarian and disaster support for aircraft such as C-17As, C-130Js, A400Ms, P-8As and soon for the UK, E-7As.

It is no surprise then that air tankers are commonplace throughout most advanced air-forces worldwide.

It is more efficient to have an air tanker go out and meet to extend a patrolling aircraft or a supply aircraft than restrict those aircraft capabilities to the range of their respective Bingo limits, and have them return to base.

Is it? If a patrolling aircraft spends too long in the air you risk fatigue if it’s a 1 or 2 man aircraft. If it’s a command aircraft, then possibly – but again, over Europe lots of ground facilities for most purposes. Support, likewise – areas needing support are close enough to airfields so it’s not necessary. Search and rescue, humanitarian, disaster support? – an extra transport or similar airplane in the fleet probably as much use to just take over duties as original returns to base. How many search and rescue missions are there in a year anyway? Further,… Read more »

I’m a bit surprised about your comment; it was maybe valid 10 before ago before France rejoined Nato and an agreement was made in a common system. But in the meantime to update you, below are the active refuelling relationships I definitely know exist: Australia refuels US flights as part of a bi lateral, Pacific treaty and Nato assistance treaty using mrtt. Canada refuels US on both a bi lateral and Nato basis using CC150’s an up rated A310. France refuels then US in the the EU, Sth Pacific both bi laterally and on NATO and using 707 & A330… Read more »

I’m a wee bit confused, is this countries that are part of NATO setting aside units for the EU but could be utilised by NATO if needed ?

I’m not stirring, just genuinely not understanding this so if anyone can shine a light for this thicky I’d appreciate it.

Yes it is, although in the Europe theatre at the moment it is the UK & France that have them. I believe from a colleague in Toulouse that the Italians are going through an a330 evaluation but is highly likely to get the go ahead if only for industrial reasons.

Thanks for getting back to me Russ, I’m still a bit baffled, the way I read it, these assets will NOT be in NATO but in some other organisation (EU Air Force maybe) but they’d be willing to let NATO use them. They would be operated by countries in NATO but not under the NATO umbrella, it just seems unnecessary.

ah I see, so you know in fact a massive majority of Nato assets are actually sovereign assets but they are available for use by Nato and soon the eu – which also allows “budget, training, fuel and use costs offsets”. For example France is buying 12 No A330 MRTT of which three will be made available for NATO use. It has been rammed home to the eu and is fair comment, that the eu was unable to act in the balkans and to this day cannot do anything other than sanctions against Russia and Syria. there is also a… Read more »

Thanks for having the patience for trying to explain it, I appreciate it. I do understand that sovereign nations have ‘their stuff’ and agree to commit certain assets to NATO while having autonomy over the rest. Having a think about it, its maybe the article that is confusing me, I’ve inferred that sovereign nations are buying kit that is deliberately not going to be available for NATO but NATO could use it. Guess I’m reading too much into the article. Still a bit confused by the EU aspect of it. I’ll leave it there, in the grand scheme it doesn’t… Read more »

Not quite clear the role the European Defence Agency (i.e. the EU) has played in all this. What did they bring to the party? Can anyone enlighten us?

Primarily funding. The partner nations can’t/won’t pay for all these tankers, so they’re splitting the cost between themselves. The EDA are organising the contracts between all the nations involved, and will likely be the organisation signing the deal with Airbus.

I believe they’re also going to organise the daily running of the fleet and some European AAR exercises.

Cheers James M,
So its under the EU umbrella rather than the individual nations. Is this the start of the EU Air Force then ?

There are two types of aerial refuelling systems. The first is the “Flying Boom” system which is predominantly used by USAF (US Air Force) aircraft. The second type is the Probe and Drogue system which is used by practically everybody else. In the past couple of decades, as American aircraft have become more commonplace in the inventory of multiple countries, the use of a Flying Boom refuelling system has become more widely used. Those countries that have bought the A330 MRTT usually have a Flying Boom as well as Probe and Drogue pods. The only exception right now is the… Read more »

So what is the UK going to do?

Currently in her inventory the UK has C-17s, RC-135s and E-3s plus she will soon have P-8s and E-7s (and maybe F-35As soon?) – all using the Boom refuelling system. Yet Voyager cannot assist them.

Aside from the USAF fleet, currently other NATO countries already fly F-16s, F-35As and some also have P-8s – again requiring Boom refuelling, yet Voyagers cannot assist them either.

These tanker_transports will be NATO assets made available to non-NATO EU members who will have access to a set number of flying hours (calculated on their initial investment with an extra amount available for emergencies). Its setup is similar to NATO’s C17 joint pool which for example allows non-aligned Sweden to use them as well. The Netherlands took lead as they already “run” the European/NATO joint air transport cell, plus they needed to replace their own KDC-10 AARs. Germany, Poland, Belgian and Spain (KC707) all have similar transport/AREF requirements, with Germany requiring an dedicated MEDEVAC capability. 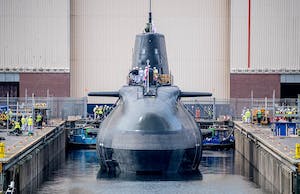 May 17, 2021
HMS Anson is due to remain in Barrow for completion until 2022 before leaving for sea trials and joining her sisters in Scotland.