The two involved aircraft took off from both homebases of NATO’s Airborne Early Warning and Control Force: from Geilenkirchen, Germany and from Waddington, United Kingdom. AWACS aircraft can constantly monitor the airspace within a radius of several hundred kilometers and can exchange information in near real-time via digital data links, providing a valuable contribution to the security of the event.

“Our AWACS aircraft are high value assets for the Alliance, contributing vitally to our vigilance and the ability to detect airborne threats and sometimes also, as in this case, to the security of our Leaders Meetings.”

NATO AWACS routinely patrol the skies during major events, including meetings of world leaders and other high-profile public events, such as international football tournaments. In support of NATO operations AWACS aircraft can be employed for a variety of tasks, such as airspace surveillance and early detection of airborne threats, providing a radar picture of ongoing activities at sea or the command and control of other NATO air assets.

Currently AWACS aircraft are flying missions in support of NATO’s Assurance Measures to its Eastern Allies, of the effort to defeat ISIS as well as of Operation SEA GUARDIAN, a maritime surveillance mission in the Mediterranean to counter terrorism.

Great the NATO has this capabiluty. But that does this say about the readiness of the UK fleet that we can’t provide 2 * E3 from home bases in our own airspace?

I suspect it’s more about NATO wanting to use it’s planes and show them off, or at least I hope it’s about that and not RAF availability

I think it’s more about the supposed togetherness of the “Alliance” rather than a lack of our own capabilities mate.
And I agree……#rollonwedgetail

As well as being necessary, it’s symbolic. I guess these aircraft are declared NATO assets and are thus the most appropriate aircraft to employ when helping to secure a NATO conference. At least the RAF is driving one of them!

But as we know the NATO aircraft are updated and current and way beyond the standard of UK aircraft, I suspect providing the best aircraft was deemed as reducing risk. Let’s look forward to Wedgetail.

Unlikely. The risk is close to zero and static radars would spot anything serious way before the AWACS, it’s purely symbolic.

what do you mean “static radar would spot anything before AWACS?”, accept it was zero risk but then why fly them in at all?

If your talking about static ground based radar, then you are sorely mistaken. Granted the AN/APY-2 radar fitted to NATO AWACS is now considered long in the tooth, it is still a highly capable radar system. Due to the aircraft flying above 30,000ft the radar will have an extended viewing range as its not constrained by the horizon as a ground based radar would be.

Think how many radar stations both in the UK and across Europe that spot any threat miles before it entered AWACS range, just a distance thing of not being able to be in more than one place at any point in time. Ok I am thinking state actor and not small plane which AWACS might be able to spot first.

At 30,000 feet an AWACS would see 212 miles from where it was at the time. At 36,000 feet this would increase to 232 miles. It would still be constrained by the horizon, it is just that the horizon would be much further away.
As an example, at 5 feet above sea level the horizon is a mere 2.7 miles away.
The formula is simple 1.22458 √height in feet.

DaveyB
Reply to  The Big Man

It also depends on the transmitter frequency and power.

True. The point I was making was you couldn’t go beyond that point other than objects protruding above the horizon.

Will
Reply to  The Big Man

Interesting topic that got me wondering. An AEW Merlin working 50 miles off, say the QE at 15,000 feet would have a max detection range of 150 miles give or take. Assuming that the Merlin was in the optimal position, that would give a reaction time of around 0.7 of a second to react to a hypersonic missile such as a DF-21 travelling at 17,000 miles an hour. Does that make sense?

NATO is an alliance, so what is unusual about aircraft from several countries actually being used to defend a NATO conference.

As the great Tom Jones would say……”it’s not unusual”…..
#rollonwedgetail

This is quite normal, in fact NATO has more capability than people think. When I was in the Royal Signals I was posted to 28 (Br) Signal Regt NORTHAG 2ATAF, we had some REME and some from the Pioneer Corp. Our equipment was mostly German and we did not come under British command but NATO command, we were not part of 1Br Corp or the British Army. The NORTHAG Signals Brigade had Brits, Belgians, Dutch and Germans with an interlink to AFCENT with the Americans. The Brit CO was a Brit Lt Col but the overall commanding officer was a… Read more »

Really Ron? What year was that? I went and did my Royal Signals training at the Uniacke Barracks as well…

Germany increasing its defence spending in 2020.
Let’s hope we can do the same!

Germany already spends almost as much as we do as a raw (not a % of GDP) as we do, an increase means they likely exceed us over time.

I can’t helping thinking that as a dozen or so countries build carriers over the next decade, ours with a handful of fighters are going to look extremely week even though they are much bigger than other countries.

Mate, great name by the way, Germany don’t and never have got anywhere near the minimum 2% GDP spending requirement. They have the largest economy in Europe so they can well afford it but unfortunately for NATO, they’re led by a party who is weak and always try to appease certain Countries which are a direct threat to NATO….
GERMANY!! ITS TIME FOR A CHANGE!!!

Quite a bit less than we do according to the IISS. As I recall, their budget did used to exceed ours in the mid ’90s, but that was a legacy of having to face off against Soviet land forces. It never translated into a broad spectrum capability, and any increase in their budget now is likely to be swallowed up remedying their existing deficiencies.

Germany……..largest economy in Europe…..how much do they spend on defence? Do they meet the required 2% GDP to be a NATO member? Have they ever got anywhere near this 2% minimum GDP requirement?
The US, the UK and France have defended Germany, alongside a pitiful token gesture from Berlin, since the end of WW2, I think it’s about time they stopped taking the [email protected]#s out of us and manned up a bit.

Yes we know this but % doesn’t buy anything, cash does and their expenditure isn’t far off ours cash wise. Should they spend more, probably, but that isn’t the point I was making.

I think a point often ignored concerning Germany and military spending, and force numbers, is World War Two, their shame, and subsequent aversion to military operations save those of a defensive nature or sanctioned by the UN. 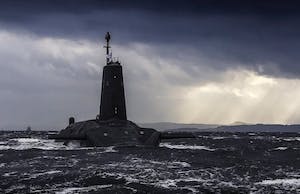