The goal of Exercise Ramstein Alloy 20-1 is to practice procedures and coordination processes among Allies and Partners. Belgium and Poland F-16 fighter aircraft, as well as Lithuania C-27 transport aircraft and a SAR helicopter, German Eurofighter aircraft and an A400M air-to-air refueler operated with Finnish F-18 and Swedish JAS-39 fighters during several scenarios.

“All aircraft deployments and missions were controlled by the Control and Reporting Centres at Karmelava and Tallinn; a NATO AWACS plane also controlled Polish and German fighters and Belgian and Swedish fighters during their air-to-air combat training. All participants are flying in from their home bases: Belgian F-16 and Lithuanian aircraft from Siauliai, Lithuania, Polish F-16 from Ämari, Estonia, German Eurofighters and A400M transport aircraft from Germany, and Finnish and Swedish fighters from their respective bases.”

According to NATO, on day 1 the central scenario was one that occurs frequently in the airspace over all Allies – a COMLOSS situation where a pilot of an aircraft loses communications with civilian Air Traffic Control.

“The Lithuanian C-27 transport aircraft simulated such a plane while transiting from Estonian into Finnish airspace. This triggered the response and coordination processes required to handle such an event from registering the COMLOSS aircraft, to launching the fighters and intercepting, identifying and handing over the plane. Finnish F-18 and Polish F-16 fighters conducted this trainings. During a simulated crew ejection with activation of the Search and Rescue chain, a Belgian F-16 was ‘rescued’ by a Lithuanian Mi-8 SAR helicopter; the German A400M conducted air-to-air refuelling with German Eurofighters and Belgian and Swedish jets executed a practice diversion with fly-by over Siauliai Air Base, Lithuania.”

“It was a perfect execution of our collective plans,” said the Ramstein Alloy leader planner at the Combined Air Operations Centre in Uedem, Germany.

“We virtually flew all our sorties and achieved all the objectives, making this first day of the exercise a full success.” 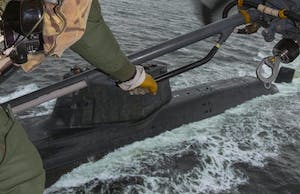