Home Air NATO fighters and refuellers to train in Netherlands 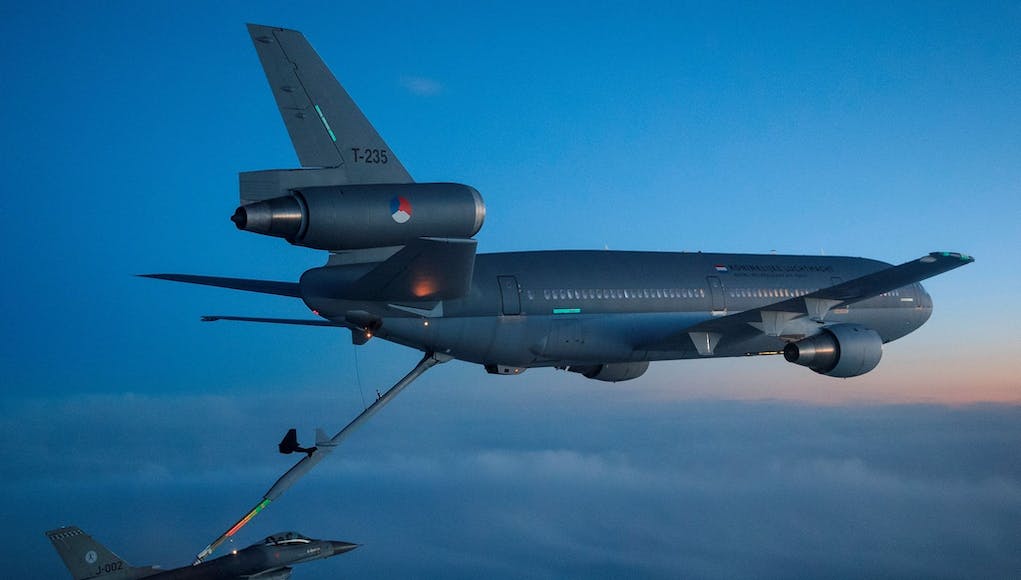 Share
Facebook
Twitter
Pinterest
WhatsApp
Email
From the 1st to 12th of April 2019, two international live-fly exercises will take place in the airspace over the Netherlands and over the adjacent North Sea.
During Royal Netherlands Air Force-hosted exercise Frisian Flag and European Air Transport Command-hosted European Air Refuelling Training, NATO Allies and Partners will fly their fighter aircraft and enabling air refuellers alongside each other.
According to the Alliance in a statement:
“Exercise Frisian Flag takes place in the airspace of the Netherlands, Germany and Denmark and brings to bear all capabilities of the different fighter aircraft to ensure preparedness for any kind of mission. More than 70 aircraft will deploy to Leeuwarden Air Base; around 50 aircraft will participate in each training mission, which will be flown twice a day.
Experience gained during previous missions will be analysed extensively and applied during subsequent missions. Frisian Flag-type exercises have taken place more or less every year since 1992; in 1999 the exercise received its current name in reference to the province of Friesland, which is home to Leeuwarden Air Base. Tied into Frisian Flag, the sixth edition of the European Air Refuelling Training or EART will provide coordinated air-to-air refuelling capabilities for fighter aircraft extending their range during flying missions.”
The European Air Transport Command members France ,Germany and the Netherlands as well as two non-members – the United States and the United Kingdom – will participate with tankers, crews and mentors, Italy will send mentors and the Royal Australian Air Force will observe the training.
Among others say NATO, EART 19 will focus on tanker cell/stacked-up formation operations and tanker-to-tanker rendezvous procedures.

EATC. Founded by France and Germany, with a French or German commander. I always thought that pooling assets was useful for smaller nations, not France and Germany. The UK opts out of this EU command but for how much longer?

I must admit, I would like to see the RAF copy the Dutch & buy a couple of 2nd hand airliners cheap, then give them a basic 3d TV controlled, boom tanker capability.
Many will say we should add a boom to Voyager, but I fear AirTanker would want a fortune for that.

We did that with the VC10s. After the Falklands we then added to the fleet by acquiring 6 then eventually 9 Tristar for use by 216 Sqn.

I also believe it is in the contract with Air Tanker that the MoD can only use them for UK supplied AAR.

If that is true, who agreed to that?

The loons in westminster.

During Frisian Flag the RAF Voyager refuelled German Eurofighters. There were no British assets operating in the exercises other than the Voyager

AirTanker would welcome it. It’s Airbus who has said it is unfeasible. Too complex and not cost effective. Airbus has offered a deal to take back 2/3 Voyagers (they could place elsewhere) and convert 2/3 second hand A330s to boom equipped MRTTs. MOD still thinking about it to my knowledge

This is new to me. Thanks SR.

Maybe they could use some of the 5 spare Voyager that are not part of the 9 in constant use, so not impacting on AAR of our fighters who don’t use boom.

Yes, that would be the plan. The AirTanker contract is flexible enough to accommodate such a transaction. Second hand Airbus A330s were not easy to come by at the time, but I suspect easier now. MOD won’t move until RAF declares formal operational requirement. So far RAF maintain they don’t need to refuel C-17, AirSeeker, Poseidon or Wedgetail in future. Don’t know for how long that’ll be sustainable, particularly if they ever get some F-35As. Exclusivity of service provision by AirTanker makes sense, if you think about it. If you go to the cost and complexity of setting up a… Read more »

I still fear AirTanker would want their pound of flesh.

What grounds do you have to say this John? AirTanker would get it’s “pound of flesh” in accordance to the existing contractual revenue/financial model agreed with MOD, no more no less.

The PFI deals that New Labour loved so much, have turned out to be an expensive disaster. That is why Phillip Hammond has stopped any new PFIs. Frankly, looking at the RAAF A330MRTT buy, the RAF should have bought outright. It would have got a higher spec tanker, for less money & not have had to worry about onerous contract terms, if it wanted a couple of KC-130J to refuel helicopters. Bristow is reported to be in poor financial shape, so I worry about the collapse of the airsea rescue contract. All of this outsourcing, for example recruitment, has problems.… Read more »

Agree with you up to a point John. It’s always cheaper to buy capital equipment than effectively leasing it. The fact is that if this had not been a PFI there would have been no Voyager. There was no equipment budget for it! So it was either PFI or nothing. Having said that, the service provision element of AirTanker is working very well and most observers in the know recognise the RAF could not do better on their own. I am as equally worried as you are about the helicopter SAR service

Not really. The credit crunch had just hit, so the government ending up lending money to AirTanker, so that Airtanker could then proceed to fleece the government. In any rational world, that was when the PFI should have been scrapped in favour of outright purchase.

How can this be true? All other Voyagers have booms so the aircraft is designed to have one installed…

Quite simple. To take an existing MRTT converted to have a centreline hose and drogue unit and reconvert it to take a boom is quite a major task. Not impossible but impractical. Better to buy back 3 second hand Voyagers and replace them with 3 second hand A330s which would then be converted from green aircraft to boom equipped tankers. Airbus maintains that would be cheaper.

I don’t see how Airbus can state that the conversion is unfeasible, not cost effective or too complex. As the RAAF have been operating theirs as boom and drogue tankers since 2011. I’m pretty certain that Marshalls of Cambridge have done these type of airliner conversions for other countries.

Davey, my answer to Lee explains it. Marshall could do a conversion under Airbus supervision if MOD wanted work done in UK but chances are it would ask Airbus to do it. The DOA and POA are already in place and the certification path is already proven and well tested.

I heard that the contract with Airtanker meant that the RAF could not supply their own tanker fleet… Not sure how true that is though.

That is how I understood it too.

No point paying twice for same service. Why would RAF want to provide own tanker service anyway? They already (or reservists) fly the aircraft and RAF engineers provide 50% of the maintenance effort under AirTanker lead. MOD would only step in to do the job themselves if AirTanker was not performing. RAF would find it difficult to find the resources to do the whole job themselves. AirTanker working very well. RAF very happy with service they’re getting. If it ain’t broke don’t fix it.