“These figures reaffirm how disastrous the decision to chop up – quite literally – the RAF’s Nimrod fleet in 2010 was. While we are always grateful for support from our allies, they must be acutely aware of the hollowing out of UK defence capability that this maritime patrol deficit highlights.

Coming in the same week that we hear the MoD is delaying the security review yet again, we have to ask if the Tories are taking the decisions to address the real threats we face. I would like to hear them restate their commitment to purchasing all nine of the promised Poseidon P-8 aircraft.”

“We have robust, multi-layered maritime surveillance including both RAF and international allies’ aircraft, as well as sonar-fitted frigates and submarines. For the future we are committed to investing £3 billion into nine new P-8 Poseidon aircraft to patrol the seas from 2020.”

Recently, James Gray, Conservative Member of Parliament for North Wiltshire outlined his concerns at the proposed number of P-8 Maritime Patrol Aircraft the UK is to purchase.

We’re willing to believe he misspoke as the UK currently plans to purchase nine P-8 Poseidon aircraft, not eight. Gray said in response to a question regarding his level of concern at the cuts the Minsitry of Defence is facing:

“More than anything else, the thinking about the possibility of a cold-weather threat is something that we have had and have contributed to NATO for 40 years. This year, at least, we are downgrading it. I am told that the MOD are going to bring it back up again the following year, but I will believe that when I see it, quite frankly. I very much hope they will. The same applies to maritime patrol aircraft, which are terribly important in all this. All right, we are getting them but only eight —the P-8s. Will they be enough really to monitor what is happening with Russian submarine activity in the North Atlantic?

Our under-ice capability previously was largely to monitor Russian SSBN activity out of Murmansk and elsewhere along the Arctic coast. Without that capability and regular patrols under the ice in the north, do we really know what the Russians are doing with their submarines? Are we allowing the bastion concept, which stretches on the map at least theoretically as far as the Shetland Islands—are we really able to check what is happening there? I think we risk reducing our capability in the High North. Generals always fight the last war. Everyone is very fussed at the moment about terrorism, counter-insurgency, Syria, Iraq and all that, and quite rightly should be. I’m not knocking that. I just wonder whether we should start to focus our attention back to where the next war will be, or the next area of tension might be, namely the North Atlantic.”

P8 is not fitted with MAD equipment in US service. I think I read somewhere that Indian P8s will be. That article may have also been erroneous, though. It would be interested to learn whether the RAF has specified this equipment. Has anyone seen a picture of a P8 with a MAD boom? The general approach has been to go with the standard US spec (including torpedoes) to keep costs down.

The P-8 is not equipped with MAD. This decision was based on two factors. MAD is 1950s technology and extremely limited in range. The P-8 has other systems which more than make up for its absence. In light of this and because of the need to save weight, the US Navy decided not to install a MAD boom on the P-8.

The Indian Navy’s P-8Is do have a MAD boom.

Hi Geoffrey, I’m usually no great fan of the SNP, but I can’t argue with Martin’s comment ….
“These figures reaffirm how disastrous the decision to chop up – quite literally – the RAF’s Nimrod fleet in 2010 was … “

The Nimrod upgrade was a disaster Alan – the wings didn’t even fit. Continuing with it would’ve just been throwing good money after bad.

The sensor and control suite, heavily based on Boeing technology could surely have been integrated on to a new platform.

The mistake was in re-using the original Nimrods and not going for a new design or one based on proven commercial systems.

Hi Latch, It was a troubled programme, no doubt – but in typical Brit fashion, the aircraft was cancelled after the main issues had been fixed! See evidence given by Dr Sue Robertson to the Defence Select Committee during Feb 2011. (You will find it easily on-line). Anecdotally, I also had the opportunity to discuss with a retired RAF pilot, who had contacts in the flight-test team. That individual told me the MRA4 was performing well at the time of cancellation, and on-track to be introduced into service during 2011. But for one of the most incoherent decisions in UK… Read more »

As I’ve said before, engineers who worked on the programme told me, at the Avro museum in Woodford, that two Nimrods were in service and one was conducting engine trials, Standard slash and burn by the tories in the name of ideology.

Will
Reply to  Alan Reid

Spot on – it was a bad decision.

It would have been a very bad decision had it been a one-off, but with a clutch of dangerous & reckless cuts of entire capabilities it certainly was “slash & burn”. Either it was incompetant Tory anti-state dogma taken to extreme at its most perverse or a deliberate decision to drastically damage & undermine our armed forces: MPA, carrier strike, Harrier fleet, our best, most capable frigates, the whole brand new deisel submarine fleet & without an outcry that stopped it, they would’ve removed anti ship missiles from our warships for the best part of a decade(OK so we’d have… Read more »

Another nothing story. Other than its unusual and surprising to hear anything about defence from an MSP

I thought the Nats hated NATO & wanted nothing to do with it?

The point is that we are now getting new MPA in the shape of the Boeing P-8 Poseidon. The bonus is that the Norwegians as well the US and Australians are also going to be operating these same aircraft so that fellow NATO and ‘Five-eyes’ countries can exchange data easily on what is going on underneath the seas.
All political parties have made mistakes in the past over defence and so it is good that this is the right decision has been made to ‘fill-the-gap’ in UK capability.

Hi J Peter I think you’re perhaps letting our elected representatives off the hook rather too easily! One of the great themes of this forum is to have political leaders that take intelligent and informed decisions in defence matters. I still struggle to understand why a UK government believed that an island nation could afford to take a “capability holiday” in long-range, maritime patrol aircraft. If the Nimrod MRA4 really was a basket case, and evidence suggests it was not, then the MR2 should have been run on for several more years. Perhaps the premiership of Cameron, and SDSR 2010,… Read more »

I don’t read the London press. I am in Scotland and I can assure you that I am not mislead on the SNP issue, they are a toxic bunch with the worlds largest chip on their collective shoulder.

Cobblers. Then I listen on the radio to Sturgeon’s speeches and watch on TV.
Same result. Same ideology.

Agree with you J Peter Wilson..

How do they detect sub’s under the ice? How much does each sonobuoy cost? How much are the fuel costs per hour and per year if 9 aircraft did a 24/7/365 operation (which they can’t)?

Planes can cover a larger area than subs due to their greater speed Tim. An effective anti submarine force needs a mix of surface ships, helicopters, aircraft and subs. The fact that so many countries operate Maritime Patrol Aircraft indicates their importance.

I expect an independent Scotland to have a defence force comparable to Luxemboug – the great euro-parasites. A great shame given the reputation and tradition of Scots warriors over the centuries

Hi Julian, the majority of Scots don’t want separation from the UK.
But if we run with your independence hypothesis, last time I checked we had a long coastline – with extensive fishing grounds, and oil-fields.
So unlike Luxembourg, I think we’ll need a navy!

I just want to point out that there are now two Julians on this site. I’m the one who has been around for ages and posts quite a lot. The above post is not from me.

I too have been round for quite a few years….point taken about the coastline…..and the (diminishing/uneconomic) oil. ok so there may be a few off-shore patrol vessels out of Aberdeen. as you say most want to stay..for now at least

Tim I believe you could be right with that.

Just a point about numbers of P8,s eg 8, and the reference to the cancellation of Nimrod , 9 Nimrods as I recall were to be in service so if that was considered to be sufficient then whats the problem. I know its history but it makes you weep when Governments cancel such programmes as Nimrod and then wind up paying much more later on for a replacement ,scrapping the Harrier fleet anther disaster in terms of capability. You can go back to the cancellation of TSR2 in the sixties a world beater ,The sheer stupidity of Government take the… Read more » 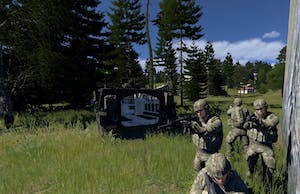 November 16, 2021
BAE has entered into an agreement to acquire Bohemia Interactive Simulations, a developer of military simulation software.