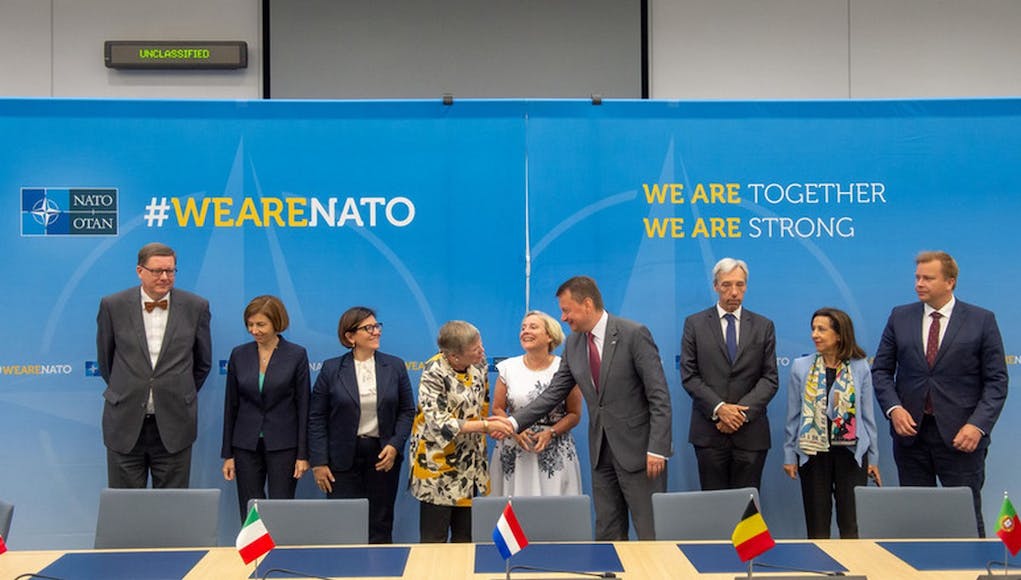 Share
Facebook
Twitter
Pinterest
WhatsApp
Email
Seven Allies and one partner nation signed a Memorandum of Understanding on Multinational Cooperation for the provision of Maritime Battle Decisive Munitions (MBDM) in Brussels at the NATO Defence Ministers’ Meeting on June the 27th, 2019.
NATO say that with this agreement, Belgium, France, Italy, the Netherlands, Poland, Portugal, Spain and Finland plan to systematically cooperate in acquiring maritime munitions with a view to achieve economies of scale and associated lower unit prices.
“The Participants will also discuss other cooperation aspects in support of these munitions, including the potential for common warehousing solutions. The agreement covers a broad range of munition types, including surface-to-air and surface-to-surface missiles, torpedoes, and gun shells.”

At the signing ceremony, NATO Deputy Secretary General Rose Gottemoeller said that this was “a significant first step towards establishing European stockpiles of high quality maritime munitions.  In time, this initiative will enhance our forces’ interoperability, our ability to share munitions, and our capacity work together in an effective and efficient way.”This MBDM initiative is modeled after similar efforts NATO Allies and partners had initiated in the air and land domains. The first joint acquisitions are expected in the near future.

Err you might want to Google what 5 inches is in mm.

Well yes. My choice of Imperial units does require a leap of faith on the part of the reader to interpret my shorthand as the BAE Systems Mk45 US manufactured gun.

I doubt it will break down precisely like that, but it’s possible. It’ll be much more interesting to see which future missile and torpedo options are chosen though, both by these 8 and the UK. 5 of these navies (plus Germany) currently operate US missile systems like ESSM, Standard, and in some cases Harpoon. Commonality with other European nations, with domestic development and production, is obviously very appealing, but arming all of their fleets combined still wouldn’t outweigh the huge stockpiles the US will manufacture for both itself and NATO. It’ll come down to economics versus politics, import probably cheaper… Read more »

The OTO 127mm and the BAE Systems 5″ MK45 uses the same ammunition.

Thanks for that. Where is it or they manufactured?

Not a simple answer as they are standard naval rounds, they are made by multiple companies in multiple countries. BAE Systems in the US, Leonardo in Italy, Chemring in the UK and many many others. Here is a catalogue for Poongsan in South Korea that makes it for example(P.19)

Interesting info. What about the futuristic guided shells. Will they be interchangeable as between the Oto 127mm and the BAE gun?

Leonardo has an agreement with BAE Systems to offer an adapted version of Vulcano to be fireable from a MK45. It is a matter of getting the electronics to talk to each other and certifying the round for the MK45.

It is important to note that these smart rounds have a reduced explosive payload meaning they are best used against soft targets like radars.

So basically the EU is now using NATO clout to buy munitions for its forthcoming Navy while most EU nations fail to honour the 2% of GDP rules? At the same time 5 EU nations France, Belgium, Germany, Luxembourg, the Netherlands (plus Norway) are using NATO to deliver air tanking with new NATO owned A330 MRTTs while us and the Yanks have to fund our own. Lets remind ourselves the MRTT-C programme is an initiative of the EU’s European Defence Agency …… Personally I think that unless a country pays more than the minimum required (2% GDP) on its own… Read more »

While I agree with your view that all members should be obliged to meet the minimum spending requirement, booting countries out for not spending the minimum would either do more harm than good, or not change anything.

Case and point: if we booted France or Germany, what would it change? They’re still our allies, still part of the EU. Any declaration of war against them would trigger the rest of the West to intervene regardless of NATO. All it would do is shift authority away from NATO and to the EU.

@ Callum – While reality says it will never happen for the reasons I stated (no one wants to offend anyone) surely if you have an arrangement for mutual defence and the majority of countries are not pulling their weight (and so not abiding by said rules) there should be ramifications to ensure the few (ie the UK and the USA and even Canada) are not defending the many surely? To exaggerate my point: If Country A decided it was not going to spend money on defence but build new factories to increase exports (bear with me) why should we… Read more »

In principle, yes, there should be ramifications for failing to meet the minimum requirements of membership. However, in a mutual defence agreement, booting anyone out just results in a net loss to your fighting power. Even if they’re not spending much on their military forces, in the case of major countries like Germany they represent a massive economic ally. Wars are fought with wallets as much as weapons. Using Brexit as justification to declare France, Germany, and the EU at large as no longer our allies is, to be blunt, fucking stupid. I do actually support Brexit, but everyone who… Read more »

@ Callum – To clarify your middle point I was not being ‘fucking stupid’ because I was not in any way suggesting Brexit be used to declare people as no longer allies. Indeed I never mentioned the word. And if you read my comment again you will see I was making precisely YOUR point that the EU are looking after themselves (as they should) and the main drivers of that are France and Germany. Sorry I cannot agree Germany are mere innocents in this matter and forgive me if I don’t respond to the rest of that part of your… Read more »