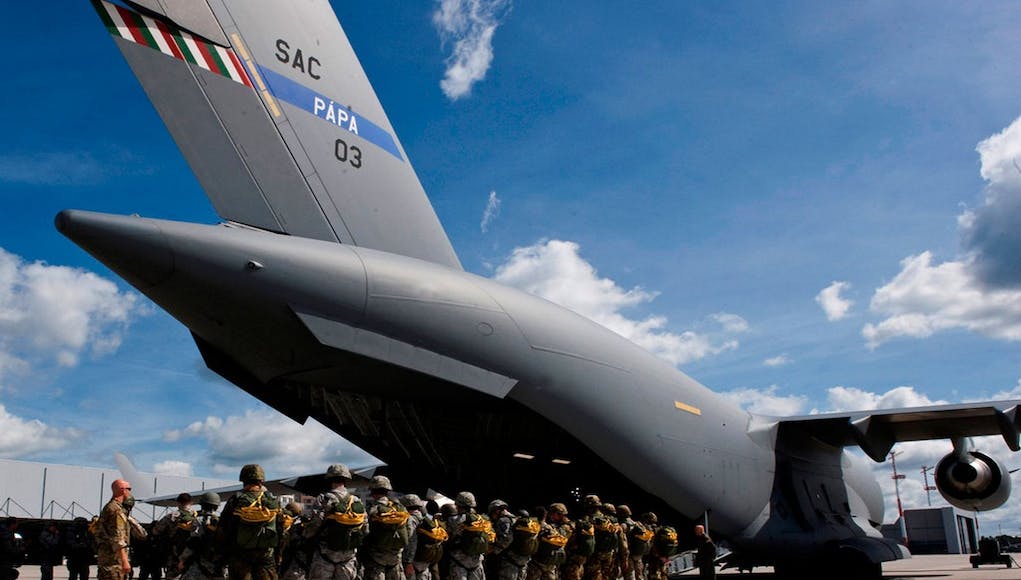 The Strategic Airlift Capability (SAC), based in Pápa, Hungary is an independent and multinational programme that provides assured access to strategic military airlift capability for its 12 member nations – including during times of the COVID-19 pandemic.

Relying on certain NATO support structures, the Alliance say that the SAC transcends the military and political alliance and is governed by the SAC Steering Board that exercises overall responsibility for the guidance, execution and oversight of the programme.

“With the SAC Memorandum of Understanding the programme was established in September 2008 and has a life cycle of 30 years as a minimum. SAC member nations are NATO Allies Hungary (host nation), Bulgaria, Estonia, Lithuania, the Netherlands, Norway, Poland, Romania, Slovenia and the United States, and NATO Partnership for Peace nations Finland and Sweden.

The Heavy Airlift Wing is the military operational unit of the SAC, it is composed of 145 personnel from the SAC member nations. The HAW operates three Boeing C-17 Globemaster III cargo aircraft in response to SAC member nations’ mission requirements. The missions are allocated in accordance with a pre-agreed distribution of flight hours. While SAC missions are flown independently of NATO’s chain of command, the C-17s are registered and flagged in Hungary, and all SAC nations share the operational costs based on their flight hour commitments to the programme.”

“SAC is a proven example of the concepts of ‘Smart Defence’ and ‘Pooling & Sharing’ developed successfully from an idea to reality. Collective ownership and operation of strategic airlift assets ensures cost-effectiveness”, said Colonel James S. Sparrow, Commander of the Heavy Airlift Wing (HAW).

I wonder when Britain will try and save money and start to share a pool of essential assets with NATO!

Not sure this is about saving money it is about making the assets affordable for those that cannot currently afford it?

The future for many of the countries with a high military spend must be to incorporate asset building into their capital programme to keep the population busy?

Home grown asset development should be the future. Preferably using advanced tech. Can we afford it? No! Will we do it anyway? Yes.

Yeah that projects perfect for nations that can’t afford their own heavy lift aircraft. The UK would save money sharing a pool of say heavy lift aircraft with NATO though Mark B, Not that I think in any way atall we should, but wouldn’t surprise me if the gov tried to save a few pound scrapping our own sovereign capability’s and just sharing NATO assets in future. And I think the UK can actually afford to develop and build its own assets. It’s a budget thing obviously and the UK gov should support projects like tempest as they will bring… Read more »

Yeah. I hope we don’t go in that direction. Amongst all the cuts and scaling back of UK defence projects (T45, T26 – the list goes on) some of the few bright spots I see are first and foremost the training and professionalism of our personnel but moving on to equipment comparing things like the size of the UK’s own dedicated heavy lift capability, and the size of the Voyager AAR fleet despite my not being a fan of PFI as a concept, vs the total fleet sizes of these shared-amongst-many-countries pooled fleets puts the UK in a pretty decent… Read more »

It needs to be remembered that this facility exists for a) Natikns that simply cannot afford a Heavy Airlift Capability and b) Don’t have a requirement that could justify creating one.