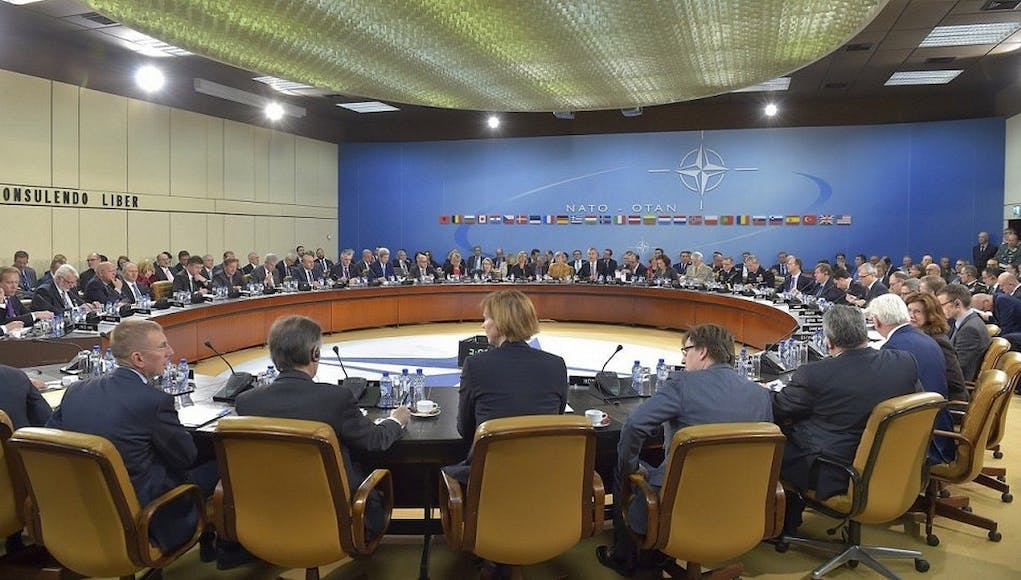 NATO has set out what is refers to as a clear position on the issues of nuclear deterrence and nuclear disarmament.

“Allies emphasise their strong commitment to full implementation of the Nuclear Non-Proliferation Treaty (NPT). The Alliance reaffirms its resolve to seek a safer world for all and to create the conditions for a world without nuclear weapons in full accordance with all provisions of the NPT, including Article VI, in a step-by-step and verifiable way that promotes international stability, and is based on the principle of undiminished security for all. Allies reiterate their commitment to progress towards the goals and objectives of the NPT in its mutually reinforcing three pillars: nuclear disarmament, non-proliferation, and the peaceful uses of nuclear energy.”

Regarding the prevailing international security environment, they further noted that:

“After the end of the Cold War, NATO dramatically reduced the number of nuclear weapons stationed in Europe and its reliance on nuclear weapons in NATO strategy. We remain committed to contribute to creating the conditions for further reductions in the future on the basis of reciprocity, recognising that progress on arms control and disarmament must take into account the prevailing international security environment. We regret that the conditions for achieving disarmament are not favourable today.”

According to the alliance:

“Seeking to ban nuclear weapons through a treaty that will not engage any state actually possessing nuclear weapons will not be effective, will not reduce nuclear arsenals, and will neither enhance any country’s security, nor international peace and stability. Indeed it risks doing the opposite by creating divisions and divergences at a time when a unified approach to proliferation and security threats is required more than ever.

The ban treaty is at odds with the existing non-proliferation and disarmament architecture. This risks undermining the NPT, which has been at the heart of global non-proliferation and disarmament efforts for almost 50 years, and the IAEA Safeguards regime which supports it. The crisis caused by North Korea underlines the importance of preserving and enhancing the existing framework of the NPT.

The ban treaty, in our view, disregards the realities of the increasingly challenging international security environment. At a time when the world needs to remain united in the face of growing threats, in particular the grave threat posed by North Korea’s nuclear programme, the treaty fails to take into account these urgent security challenges.

The fundamental purpose of NATO’s nuclear capability is to preserve peace, prevent coercion, and deter aggression. Allies’ goal is to bolster deterrence as a core element of our collective defence and to contribute to the indivisible security of the Alliance. As long as nuclear weapons exist, NATO will remain a nuclear alliance.

We call on our partners and all countries who are considering supporting this treaty to seriously reflect on its implications for international peace and security, including on the NPT.

As Allies committed to advancing security through deterrence, defence, disarmament, non-proliferation and arms control, we, the Allied nations, cannot support this treaty. Therefore, there will be no change in the legal obligations on our countries with respect to nuclear weapons. Thus we would not accept any argument that this treaty reflects or in any way contributes to the development of customary international law.”

…a pointless statement. NATOs mission should be focused on all members’ commitment to the mutual conventional defence of all or any other member nations if attacked. I don’t see why NATO has to be a “nuclear alliance” when most members don’t have them and some wouldn’t want them if proffered. The maintenance and use of nuclear weapons is very much a national decision. The commitment of, say, Britain to build and maintain them is not something that follows consultation with Belgium, Luxembourg, etc. The stated commitment to nuclear non-proliferation treaty seems pointless when some signatories like Iran can breach article… Read more »

The statement seems removed from the realities of the world & failure of the NPT. Any state with the funds & political will can develop or access nukes. The Saudis have nukes just waiting delivery from Pakistan if needed. Ukraine gave up theirs(ex-Soviet stocks) on the understanding Russia would guarantee it’s territorial integrity. That really worked out well after Russia took the Crimea & Russian backed rebels took eastern Ukraine. Exporting off the shelf nukes to the highest bidder could be a reality soon, if not already the case.

Yes, you’re right, Frank. It may be a function of nuclear weapons being relatively old and accessible tech. It’s inevitable that that they become within reach of nations that would previously have been unable to solve the technical issues of development. That problem is compounded by the increasing ability of advanced nations to shoot them down. That is eroding their deterrence effect. We are approaching a time when advanced nations could reasonably expect to strike less advanced nations and survive a limited counter-strike. These realities should have played into British discussions on the renewal of the nuclear deterrent. I believe… Read more »

Yes everyone is correct,but look at that table,what about all their freebies and how important this makes them all feel.