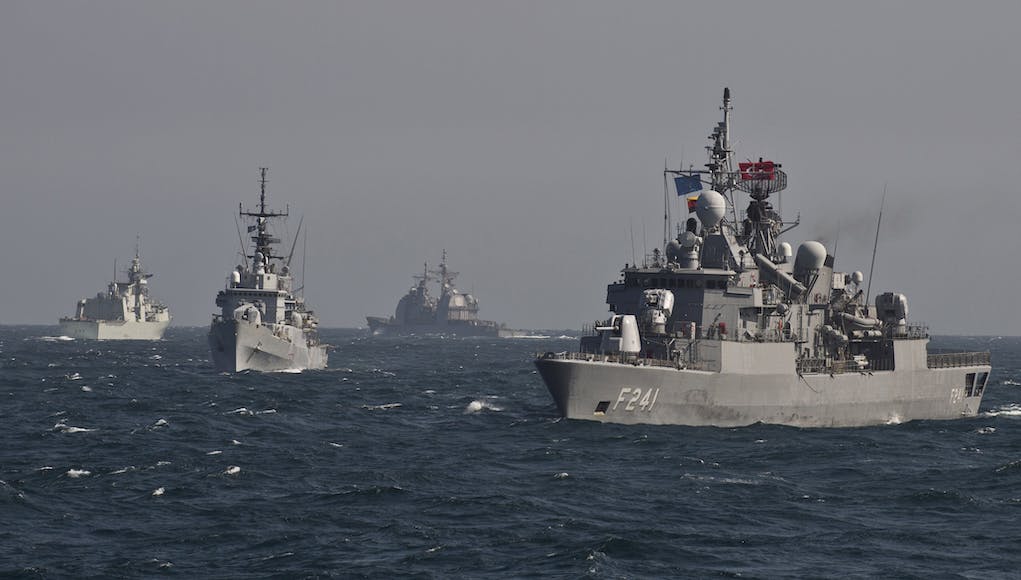 NATO Foreign Ministers agreed a package of measures to improve situational awareness in the Black Sea region and strengthen support for partners Georgia and Ukraine.

Ministers also reiterated their call on Russia to release the Ukrainian sailors and ships seized near the Sea of Azov.

Earlier, Ministers addressed Russia’s continuing violation of the Intermediate-Range Nuclear Forces (INF) Treaty. They called on Russia again to return to full and verifiable compliance with the Treaty, and discussed the way forward.

“We will not mirror what Russia is doing. We will be measured and coordinated. And we have no intention of deploying ground-launched nuclear missiles in Europe. At the same time, NATO will continue to maintain credible and effective deterrence and defence.

And all Allies are strongly committed to arms control and non-proliferation. Russia’s ongoing violation of the INF Treaty is a pattern of destabilising behaviour. Russia used force to illegally annex Crimea from Ukraine.  And continues its military build-up across the region.

We call on Russia to release the Ukrainian sailors and ships it seized last year near the Sea of Azov. And we discussed what more we can do to enhance our security in the Black Sea region.

We agreed a package of measures to improve our situational awareness. And to step up our support for both Georgia and Ukraine.  In areas such as the training of maritime forces and coast guards. Port visits and exercises. And sharing information.

This will build on our already close cooperation.

Right now, one of NATO’s naval groups is on patrol in the Black Sea.  And today, it is exercising with Ukrainian and Georgian ships. So we will maintain our focus, and our presence in this vital region.”

Interesting looking frigate to the right of the caption photo. Is that a Turkish flag? I assume the B and X turret locations are CIWS….but what system?

Rob and Crab pretty sure you are both right in regards to the CIWS as it’s on both classes.

Was looking for further clarification in the speech regarding how these actions will be implemented, but the key information is literally a repeat of what Tom has already posted above.
I Wonder whether there will be increased NATO task group visits to the black sea? Or whether individual countries will be expected to increase patrols in the black sea area. It will be interesting to see how this actually manifests itself.

I didn’t realise the Black Sea needed more NATO security!!!… Imagine if Russia said it plans to up the security and put warships patrolling the Gulf of Mexico…. we actually need Russia being the Enemy because we wouldn’t have half of our military hardware in the UK without them being a threat. Even though they aren’t. But the UK governments always buying the bare minimum military equipment needed so they must have figured that out! Russia’s no threat to the UK…. eastern Ukraine yes but they want to be Russian supposedly…..

Agree with you there Cam.

Wow that’s a Bold statement expecially considering we have had both a nuclear and biological attack on this country in recent times by the Russians or under their auspices at the very least that has killed one innocent person, put Fear of an early death sentence on a number of others and endangered many more. Had it happened in reverse I suspect we would be on the brink of war. As for the Black Sea its shores border various NATO and friendly countries so just because the Russians see it as their property I see no reason for the rest… Read more »

A Russian vessel transiting the English Channel causes enough fuss here. Imagine how much Putin can use NATO’s moves to whip up the Russian people, when required. Russians have been told the Black Sea is a Russian lake since Peter the Great’s expansions in the early 1700’s. Touchy spot.

John, some of us have indeed been saying that on here and elsewhere.

What fuss exactly? This site is hardly representative of the nation most of which pays no attention whatsoever.