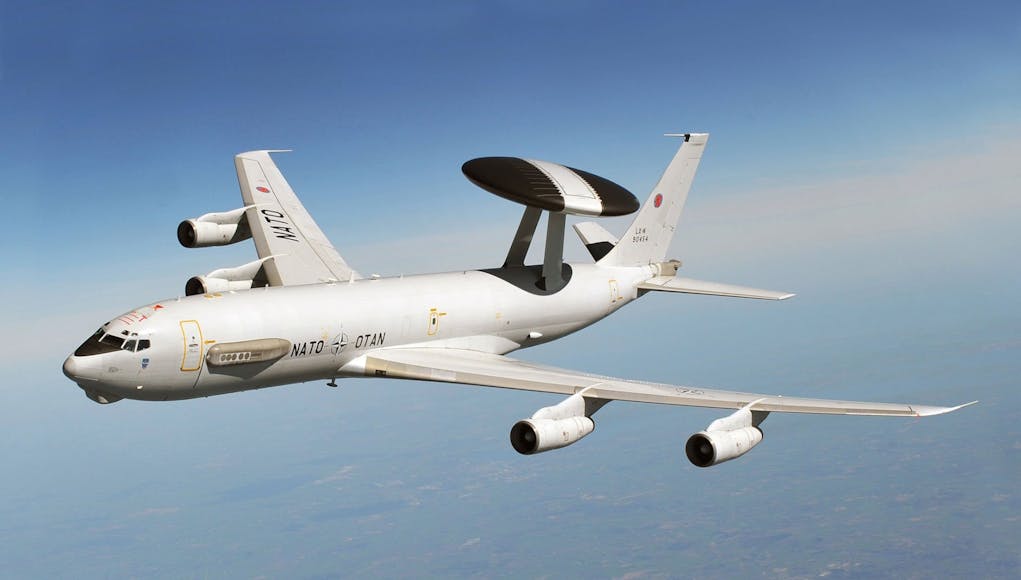 NATO is to upgrade its ageing fleet of E-3 AWACS aircraft at a cost of $1 billion, the Alliance announced on Wednesday.

“I can confirm we will sign a contract upgrading, modernising the AWACS fleet, $1 billion dollars” Jens Stoltenberg told reporters at a meeting in Brussels.

The upgrades will take the fleet through to 2035, but the decision on what will replace the aging aircraft has not yet been made.

NATO has fourteen E-3A AWACS aircraft, which are modified Boeing 707s, easily identifiable from the distinctive radar dome mounted on the fuselage.

The E-3A usually operates at an altitude of around 10 km. From this altitude a single E-3A can constantly monitor the airspace within a radius of more than 400 km and can exchange information – via digital data links – with ground-based, sea-based and airborne commanders.

“We are also now looking how to replace the AWACS fleet in the future after 2035”, Alliance chief Stoltenberg also said.

Earlier in the year we reported that NATO may replace its E-3 Sentry aircraft with new E-7 Wedgetail aircraft. Michael Gschossmann of the North Atlantic Treaty Organisation agency that manages the AWACS fleet, had told Reuters here that expected to finalise by December a $750 million contract with Boeing to extend the life of the E-3 aircraft through to 2035. With this news, he has now done so.

The important point however is that Gschossmann also said it was critical to decide quickly how to replace the 1979/1980-era aircraft or NATO would need to take costly steps to keep them flying even longer.

Gschossmann advised that NATO could follow the lead of member states Britain and Turkey in purchasing the E-7. Those aircraft, he said, were large enough to add potential new capabilities, such as operating drones for expanded surveillance, in coming years.

The E-7 is based on the Boeing 737-700 with the addition of an advanced Multi-Role Electronically Scanned Array radar.

“Why don’t we bet on the proven technology that we already have in the E-7 and provide NATO with a certain number of those aircraft? That would give us a basic capability that could be expanded in the future,” he said.

Wouldn’t they be better off following the UK’s lead and just buying brand new Wedgetails instead?

That’s what I thought; this seems an odd decision to me- may be some of the European members are holding out for an Airbus based replacement?

Airbus do offer a similar system to the wedge-tail but they based it on the A330, when the UK was looking to upgrade. as they could use the surge fleet 330s from the tanker alliance aircraft. but due to EU involvement and Airbus bankrolled by French Govs, they went for a same platform of the P8 as there is no need for another type on a maintenance programme and flight training, and Boeing wont take away main design support.

Any airframe experts on here? What mods does a fuselage need to take a scanner array or similar? Does it require an internal subframe to distribute the load?

Absolutely, it’s the aerodynamic loads in all phases of flight, such as gusting crosswinds let alone a standard landing, that would place an undesigned for load on an essentially a cylinder. The E3d’s rotor dome, when in flight, is neutral in weight. Ie it makes its own weight in lift.

I’m not an expert but as the radar is mounted above the centre box section, which encompasses the wings I would say it does, unless it already has built in redundancy for the added weight.

anyone else worried that Turkey will have access to E-7, given their ever-closer relationship to Russia (S-400 etc)?

I find Turkey under Erdogen chilling & his support for Isis & Putin, plus offensive against our Kurd allies very disturbing. Mind you for me trump as POTUS isn’t much better.