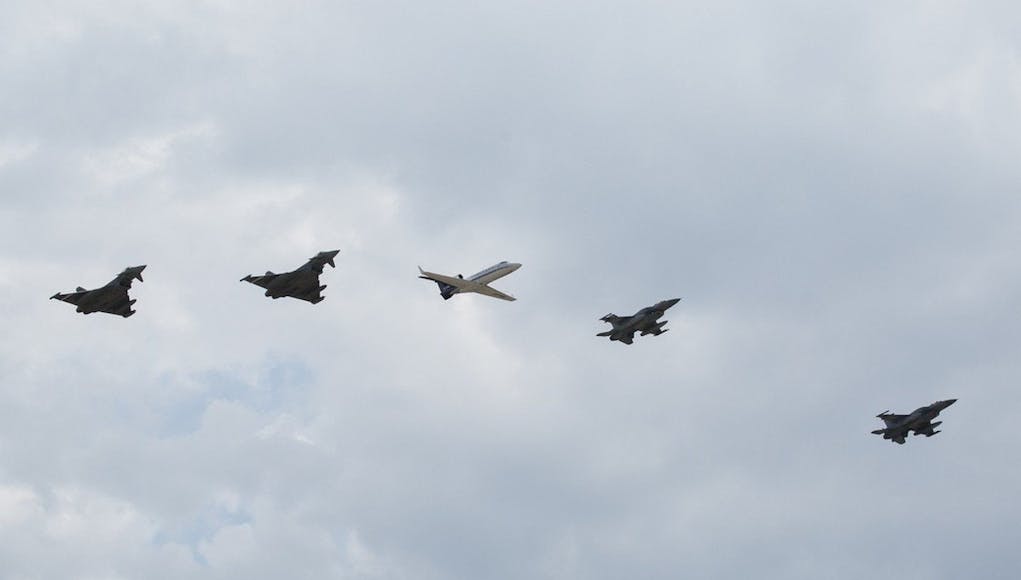 On the day of the anniversary of Montenegro’s membership in NATO, a symbolic event took place at Podgorica Airport marking the start of NATO Air Policing over the country. Two Hellenic Air Force F-16 and two Italian Air Force Eurofighter Typhoon jets executed a simulated intercept of a Montenegrin government Learjet. The Montenegrin Minister of Defence Predrag Boškovič, NATO’s representative, Brigadier General Roberto di Marco, and the Italian Air Force representative, Major General Silvano Frigerio, watched the fighters flying up to Learjet, signal to the pilots and escort them to a safe landing to the military part of the Podgorica Airport.

“What we have witnessed today represents just a small part of the benefits that Montenegro enjoys from NATO membership. We made the right political decision on joining NATO, thereby securing our borders, airspace and sea, making them safer,” said Minister of Defence Boškovič.

“I would like to express my gratitude to all the Allies that have recognised and valued our efforts prior to becoming a members, and especially to Italy and Greece who agreed immediately to take over the responsibility of securing our skies,” he added.

“One for all and all for one; Montenegro – like 28 Allies before – experiences today what this means,” Brigadier General di Marco, Deputy Commander of NATO’s Depoyable Air Command and Control Centre.

“The cohesion of common values, the commitment to common security and the resolution to common deterrence and defence. NATO appreciates the valuable contributions Montenegro has made to our Euro-Atlantic security, including through the contributions to NATO-led missions and operations,” he added

The jets symbolised a procedure that NATO’s Combined Air Operations Centre at Torrejon, Spain, will initiate when an unidentified track flies close to or inside NATO Allies’ territories. Italian or Greek fighters will be launched to interrogate the corresponding aircraft. Such incidents often occur when civilian airliners lose communications with civilian air traffic controllers.

NATO’s Air Policing involves radars and mobile sensors, air command and control systems and fighter jets to quickly, reliably and predictably to safeguard Allied skies. Since Montenegro does not have the necessary air capabilities, Greek and Italian fighters execute the mission ensuring a single standard of airspace security within the Supreme Allied Commander Europe’s area of responsibility.

Montenegro joining NATO really hacked off the Russians. The country is a long standing ally of Russia. The hugely impressive Portomontengro luxury yacht marina used to be a huge Soviet naval and submarine base. The coastal resort of Budva is practically Russian with the number of expats and holiday homes owned by Ivan. China is Russia’s new best friend. Today China awarded Putin the first ever ‘Friendship’ medal. They are both now lifelong dictatorships. China will be the world’s biggest economy by 2030. China and Russia have half the Eurasian landmass, more men under arms / nukes than the rest… Read more »

So much for all those saying we didn’t need to build the Typhoon (or various other weapon systems) because it was old fashioned thinking that no longer applied to the new World order. Within 20 years it is likely to be far worse intact not something most thought that they would encounter though the moment we started feeding the Chinese economy to ‘bring them in from the cold’ we have irretrievably fashioned ourselves. The only thing it teaches us is to beware the words of well meaning but totally naive politicians. We heard similar misguided remarks concerning Turkey until recently… Read more »

Had no idea Montenegro had joined NATO. I must start keeping up! I think we should let the US, Oz, Japan and S Korea look after China. There’s no way we can from here. But European NATO powers can and should step up to Russia. Mostly they do: UK, France, the Scandies and Baltics, Holland, Poland, but there are also a few laggards. We could and should do better.

Considering what is happening in Italy at present the new Government there might start urging Russia to reform the Warsaw Pact so that they can join.

I hope not spyinthesky. I hope Italy will in fact become a painful but important beacon that will show the rest of us the folly of falling for populist politicians that exploit people’s fears to further their cause promising simple, attractive solutions to very complex issues. I’m hoping the five star/lega success in Italy will simultaneously represent the zenith and nadir of the populist movements in Europe. We shall see. Fingers crossed