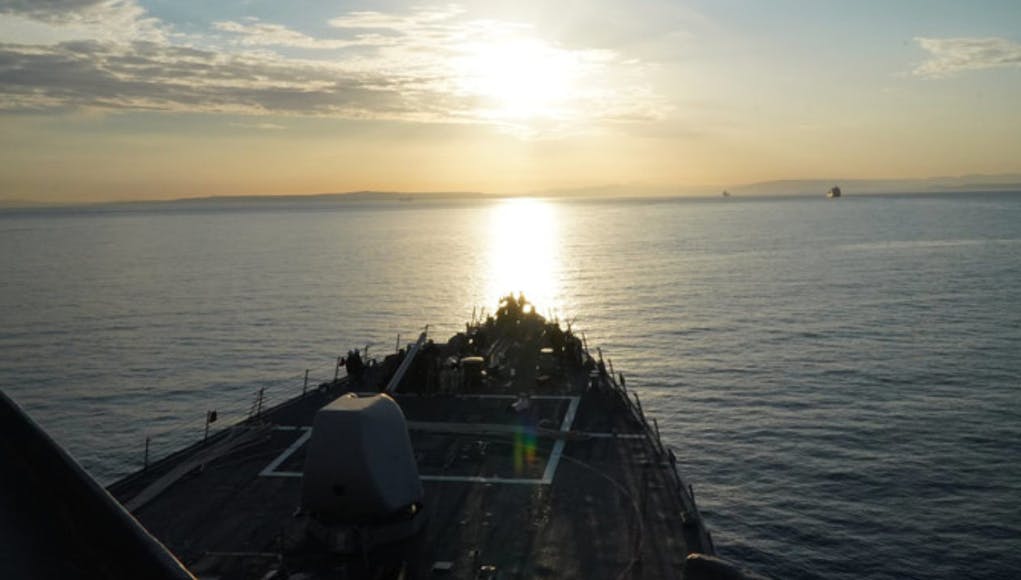 “The Black Sea is of strategic importance to NATO. Three Allies – Bulgaria, Romania and Turkey – are littoral states, while Georgia and Ukraine are close partners. In response to Russia’s illegal and illegitimate annexation of Crimea from Ukraine and its ongoing military build-up in the Black Sea, the Alliance has increased its defensive presence in the region and remains strongly committed to Black Sea security.”

The US Navy and other NATO navies routinely operate in the Black Sea, consistent with international law, usually patrolling the waters for around two-thirds of the year.

In addition, the Spanish Air Force has deployed six fighter aircraft to Romania for NATO air policing duties. During the two-month deployment, the Spanish aircraft are stationed at Kogalniceanu airbase on Romania’s Black Sea coast.

The aircraft will fly patrols alongside the Romanian Air Force.

NATO is also strengthening support for Georgia and Ukraine, including with coast guard training and the sharing of information.

For now we can sleep in peace, but it won’t always be like this. Where is the world going? 1) First, we will see the return of Russia (Daniel 11:29a). It means strengthening Russia’s position and a significant weakening of the United States. Furthermore, it also means crisis, which will eclipse the Great Depression. Not only the eurozone will break up, but also the European Union and NATO. Many countries of the former Eastern block will return to a military alliance with Russia. 2) Then there will be a global nuclear war. (Daniel 11:29b, 30a; Numbers 24:23, 24; Isaiah 5:24,… Read more »

WOW. I thought 2020 was a bad year, that sounds absolutely awful. Thanks for the “heads up”.

What a load of Iron Age hogwash.

“However, no one knows the day or hour when these things will happen, not even the angels in heaven or the Son himself. Only the Father knows.” Mark 13:32

“But about that day or hour no one knows, not even the angels in heaven, nor the Son, but only the Father.” Matthew 24:36

“However, no one knows the day or hour when these things will happen, not even the angels in heaven or the Son himself. Only the Father knows.” Mark 13:32

“But about that day or hour no one knows, not even the angels in heaven, nor the Son, but only the Father.” Matthew 24:36

Phew. That’s a relief. I’ll order the whitewash for my windows on next day delivery now.

I’d save the money if I were you. Perhaps wait until the sales if you are that keen.

Glad i only read the Mail !

Not a boast many would make!

What have we got here!
You must be Smoking really strong stuff!

NATO and the EU will join a military alliance with Russia ? lol a lot of wishful thinking from you Ewiak.

Meanwhile, in the real world…

Puke, chuff and vomit………….My prophecies are these, you have no friends, and you wont in the future!

Wrong, Jesus will love him ❤

I have read some complete and utter bollocks on this site, mostly entertaining in it’s own way. This claptrap takes the biscuit. If Mr Ewok, or whatever his name is has missed his meds, then someone should give him a checkup from the neckup.