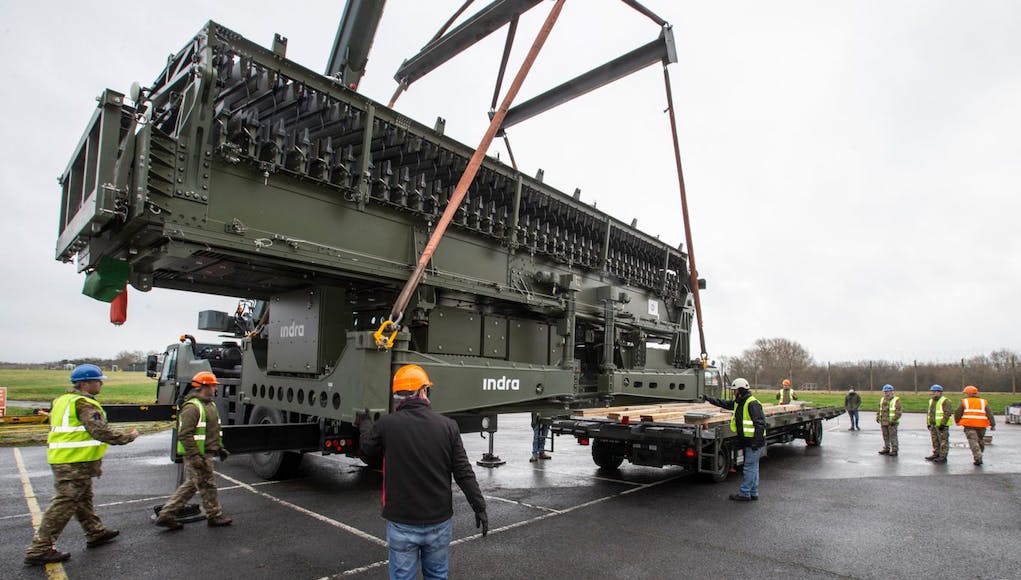 The RAF say that the system can be deployed in support of worldwide operations or used to cover gaps in coverage on home shores.

According to a Royal Air Force news release:

“Due to its small number of components, this system can be rapidly deployed worldwide using in-service military vehicles and transport aircraft such as the Hercules C-130J. The radar also benefits from being highly capable of mitigating the effect of windfarms and can rotate at two different speeds providing an Air Traffic Radar Service mode long desired by the RAF. The radar will be used mainly for long range surveillance of co-operative (secondary surveillance) and non-co-operative aircraft.

The flexibility of the system means that the RAF will be able to carry out a variety of Battlespace Management Missions, including long and short term deployments worldwide, as well as gap-filling in the UK in response to national operational requirements. Last year the DE&S ADEWS team excelled in getting Indra on contract in just six months due to hard work and an open relationship with their RAF customer and despite COVID 19 significantly impacting both Spain and UK making planning particularly challenging on both sides the team has made significant progress.”

Now the radar has arrived in the UK it will undergo extensive trials and is due to be accepted into service with the RAF by mid-2021.

US stands up first Europe-based F-35A squadron in UK

Good news ;P
Perhaps we should be buying more than just one though?
And forward base them

Not needed. I think this is to fill an existing gap.

May I ask you a serious question… thank you; Outside of this little obscure comment section, what real world experience or clout do you have?

Are you simply a military fanatic?

Some of your comments are stated with absolute authority yet are obviously made by someone who’s on the outside looking in.

Calling yourself Reaper sounds a bit dodgy, doesn’t it?

Daniele does Not come across as arrogant, Not at All!

Daniele has A lot of useful facts and info, which is expressed here,
which I appreciate very much thank you!

Military fanatic seems a little strong……perhaps ‘enthusiast’ or ‘observer’ would be closer to the mark! But then that is who UKDJ is for……

….and exactly who are you?

Rather ‘jumping the shark’, what? Is this site really less worthwhile for being ‘little obscure’? Seems a trifle unkind. As for experience, does one have to pass exams to comment? You could creep up on me in a tank. Can’t I be interested all the same? I think most who somehow find there way to this obscure blog can decided on the level of trust they place on another person’ opinion. It may be more or less than mine but what of that?

Strange comment and why do you single out Daniele? UKDJ is a broad church with a broad and varied pool of knowledge. Daniele provides much value to this site with his enthusiasm and detailed knowledge. I would guess he his much like myself in that once he embraces an interest he absorbs and retains knowledge very quickly.. As a teenager i was a football fanatic and could tell you in any given match, who played from both sides, who scored the goals, the size of the crowd etc.. Real world experience is..real world experience. Whether you are a serving member… Read more »

None whatsoever. I’d call myself a researcher. I don’t mind the fanatic description as I’m passionate about this subject. If any comments come across that way it is because I’m confident in my knowledge. I look into things. If I have no knowledge to share on a subject I don’t comment. You may note my comments over the years, when politics dies not raise its damned gead, are limited to units, orbats, infrastructure, history. I could really go to town if you’d like with non open source material, but I don’t, all I comment on is open source. Not procedure,… Read more »

Wow, strange comment. Do you have to be a big tashed, cigar smoking Airborne/Commando/Wolverine underwater knife fighter to post on here. Daniele seems to be a guy who is genuinly interested in Defence matters, and knows his stuff inside and out. In fact, ive banged out 29 years in the job, at every rank and up to LE, and his broad brush knowledge of defence matters, far outstrips mine. Your questions seems a little churlish mate.

For myself, just a taxpayer with an interest in defence I am always impressed by the thoroughness of Daniele’s contributions; well researched and thoughtful.

Likewise. I’m another enthusiastic amateur, bar a short time as a STAB. But I do come from 4 generations of PBI, so military matters are in my blood.

I read UKDJ daily and learn a lot from the comments on here, from all corners – inc Danielle.

Wishing everyone a peaceful and safe festive period.

Daniele is a veritable fount of knowledge which, where I have checked it, has been pretty good.

I think we are all pretty careful on here with what we say. But it does often amaze me just how much detailed information is in the public domain. Hasn’t stopped George censoring some of my posts with DaveyB!

When I used to do MOD work most of what is being discussed on here would be highly secret: now it is on Wiki!

No one is censoring your posts.

It would appear Harold has changed his moniker and is now masquerading as an authoritative arm chair airsoft special force operative.

Some long range air/ballistic defence missiles would be nice to go with it!

Agreed, this could be an easy first step into forming a mobile ballistic missile defence capability.

When Saxa Vord was reactivated a few years back, I understand the existing radar at RRH Staxton Wold was moved to that location, given the renewed importance of coverage in that area.

I believe this new radar will replace it at Staxton.

If deployed the obvious users are 1 ACC.

The MoD most have recognised the gap?

Morning M. Or found more money? This just re establishes the radar network as it was before RRH Saxa Vord was deactivated. To give a wider picture, RAF has long range air surveillance radar at Saxa, Buchan, Benbecula, Brizlee Wood, Staxton Wold, Trimmingham, Portreath. These RRH All feed the CRCs, as do several CAA radar sites. The CRCs co coordinating it all are Boulmer and Scampton, with the NADOC at the bunker at Nap Hill the pinnacle. Other infrastructure and comms stuff related to the ASCS force are at Anthony, Weyborne, Neatishead, and other places. That little summery is dedicated… Read more »

Right I am totaly offended….People on here, imparting correct and well researched info….what the hell are they thinking, damn I may write to my MP! This isnt how its done, nowadays its all about one liners, word of mouth and partialy researched rumours and gossip!

Afternoon @DM, I have say that I’m somewhat surprised by @Reaper’s line of comment, as if anyone has to justify why they post on here or the level of experience/knowledge that they may or may not have.

I think that if it were me, I could take those comments in two ways, a genuine enquiry, if so, asked in totally the wrong fashion, or, the way everyone else on here has interpreted it- as a complete D***H***!

Mate. don’t feel you have to justify yourself to the likes of him, keep posting, its good stuff.

Thanks, that makes sense; I thought we were buying Giraffe systems for deploying abroad- had never heard of Indra before..!

I’ve never heard of Indra either.

We are buying Giraffe. The Giraffe radars are operated by 5 RA, the army, which is the ISTAR outfit.

The RAFs deployable radar unit, 1 ACC, ( 1 Air Control Centre, at Scampton )operates radar similar to those of the ASCS force, which most of the time are fixed, with the radome in place.

It can supplement these if necessary in a mobile role but most often you’ll read of it when deployed on RAF ops abroad. It also supports other UK radar sites overseas.

Joe, just thinking, i gave you the wtong outfit.
I must correct myself. 16 RA, which has the LEAP unit, not 5 RA.

Thanks for the info- glad that the Giraffe purchase is still going ahead, they seemed a good fit with Land Ceptor as some form of deployable AAD system. Interesting about the RAF’s side of things; I once visited a site in Norfolk that was an operational radar station (I think), but also housed a museum about the history of our radar use. It was really very interesting, although I have to admit I didn’t hold out high hopes before I went…! I suppose it’s one of those elements of the UK’s defence posture which is vital but rarely talked about… Read more »

The museum is still there, and the RAF station has closed, though MoD retain a small fenced off enclave.

The RAF have no air defence missiles of that type now.

The QRA system is as effective now as it was then.

Nope, false news……. This is just the latest Merlin V120 Cylinder engine that will power the latest RAF Mosquito Stealth Bomber ………….. Oh how I Wish !

You’re not alone Captain.
My 1st thought on seeing the photo was it’s a big Rolls Royce engine!
I’m guessing its folded up lol.

Looks too big to fit in the back of a C130…..perhaps it breaks down further?

There is a step ladder in the first photo to help get an idea of the size of the unit.

The camera never lies eh! All a question of perspective? It reminds me of an episode from ‘Hitchhikers guide to the galaxy’ where an invading space fleet attacks the Earth, but due to a gross error in calculating size, they are swallowed by a dog!

The Indra pdf states that it is also helicopter transportable. Not sure what copter they are referring to, or if it is inside or outside.

not sure about hanging $11M of radar from the bottom of a chinook.

Missed off civilian
Reply to  Bob2

So more defence cuts third of typhoons going buying about half of f35 if we don,t get more cut. Defence what defence. All this radar cover good. See them come but nothing flying to shoot them down.