A new radar facility to track unidentified military or civilian aircraft will be powered up ready to operate soon, the head of the RAF heard today.

RAF Saxa Vord is a radar station operated by the Royal Air Force. It is situated on the island of Unst, the most northern of the Shetland Islands to the north of Scotland.

The Government say that radar will improve RAF and NATO understanding of the airspace north of Britain and further out across the Norwegian Sea, improving the UK’s sovereign capability ‘at a time of heightened Russian military activity’. It will see the island return to the role it performed during the 1960s and 70s, when the site was used as an early warning radar on NATO’s northern flank. 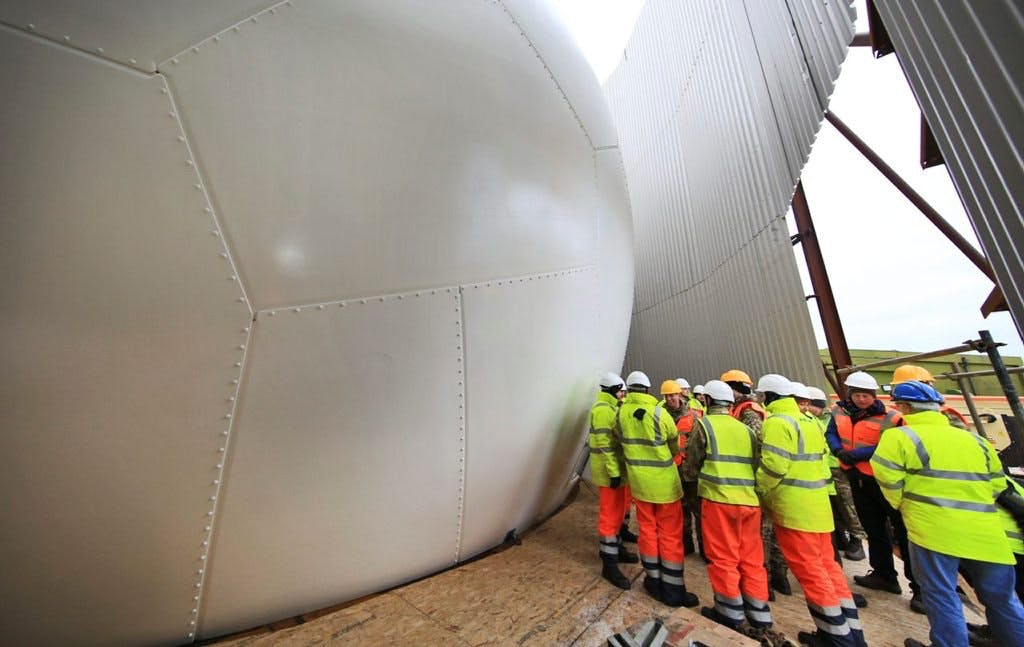 “We will always protect our skies from Russian aggression. This radar is a vital part of the UK’s defences as we react to intensifying global threats and reinforce our ability to tackle them. Russia’s actions are not limited to Europe’s eastern borders ­– the threat to British livelihoods is severe and real.”

“The radar system at Saxa Vord is an important part of ensuring that the RAF can fully protect both the UK’s airspace and that of our NATO allies, in the face of increasing pressure from Russia.

Right at the tip of Shetland, Saxa Vord is a very remote site, so I’m extremely grateful to the team who have been working hard through the cold of winter, with snow and 120 mph gales, to ensure that the construction has remained on schedule.”

“The Saxa Vord Radar head will provide key information on aircraft movements to the north of the UK and feed the nationwide Quick Reaction Alert (QRA) operation which is responsible for policing international and UK airspace from RAF Lossiemouth in Moray and RAF Coningsby in Lincolnshire, as well as supporting civil air traffic control.

Scotland is home to more than 10,000 regular and 4,000 reserve armed forces personnel, whilst Scottish industry benefits from defence spending £1.5bn with it each year. This investment supports 9,750 private sector and highly skilled jobs in Scotland.”

Apart from a few Typhoons and maybe Tornadoes
Do we have any air defences?
Bloodhounds have long gone….

Not deployed no, but we are buying the land version of sea sparrow (or other AA missle) so maybe that will be deployed at bases.

I assume you mean Land Ceptor, the land-based version of Sea Ceptor, which is replacing the Rapier system.

How are “they” going to get to the UK to overwhelm our air defences, without encountering other resistance?

and pick air defence and Aew.

To be fair five squadrons is relatively small.

Depends on how effective, what the relative kill ratio is. I like the Typhoon.

Oh yeah I love it to. And five would be plenty if it was just used for air defense.

At the end of the Cold War, the RAF had 9 front-line squadrons dedicated to the air-defence role (F3 x 7, F4 x 2). And only a few years ago, the MoD still had a requirement for a minimum of 5 squadrons for air-defence.
Then they suddenly reduce the need to only 3; and no doubt purely by
co-incidence, at about the same time the UK buy of Typhoons was cut from 230 to 160!

Does the MOD actually do anything to protect sites like this beyond putting up a sign saying ‘pretty please don’t tresspass’? I mean for gods sake, you’ve got protesters managing to halt nuclear weapon convoys for five minutes because police are too scared to remove them forcefully and idiots managing to get onto nuclear submarines in what is supposed to be the most secure military installation in the UK. And in war? It’s like Bowman sad, It will be annihilated by cruise missiles before the MOD can send a token air defenses unit with camera crew to show ‘how much… Read more »

Tornadoes long since departed from the Air Defence role Dennis.

The radar won’t be defended I am sure, not from the air. The French and Italian both operate the air defence missile in the Royal Navy’s Type 45 in a land based mode, may be we should have some defending key installations like this, specially as a previous person wrote Blood hound is gone ( with no replacement ).

It’s a day 1 cruise missile target. Quite silly. Wouldn’t it have been better to deploy a mobile radar system that could be more easily defended?

Whilst Rapier is outdated and its range is inadequate to defend against a modern fighter/bomber, it could in theory act as a decent last line against incoming cruise missiles (in a similar way to ship based CIWS), in a point defence role, situated on site next to a radar station or multiple on an air field /military base. It will be interesting to see how many land ceptors they buy and if the numbers would be enough to provide coverage for the various sites across the country. My guess they will use the extended range as an excuse to cut… Read more »

You have an astounding grasp on the warped logic of the average MOD beuracrat Steve. Past in accounting?

The issue is not a MOD bureaucrat, it’s a Treasury bureaucrat carrying out the elected Government’s policy of “balancing” the books before reducing taxes for the wealthy.

If it was a day 1 target, London and Moscow would be atomic creates 40 mins later.

Yes Patrick, you have put your finger precisely on what seems to be conveniently forgotten since the end of the Cold War – one or other side will be tempted either to threaten the use of nuclear weapons or when under pressure to think that they could get away with one or two itsy-bitsy ‘tactical’ nuclear weapons without provoking an all-out nuclear exchange. The truth is that if there was a conventional war between NATO and Russia it would mean that nuclear deterrence has failed because nobody believes that anybody would be willing to destroy the whole of Europe in… Read more »

This type of radar can’t be road-mobile.

If the Russians destroy it with a cruise missile strike then Britain is at wary anyway!

Not building something based on “a cruise missile might hit that” would leave Britain with nothing.

I wonder how many of those builders are Bulgarians?

Doesn’t look like we took the opportunity to standardise our big radars on the S1850 as carried by QEs and T45s. Commonality of training, maintenance, spares and all that not to mention a chance of a price reduction. Sorry for being sensible.

When you say big radars, how do the sizes of this radar compare with the S1850, is it in the same ball park or it is larger/smaller?

Plus it’s not just size. Do we know much at all about this new land-based radar? Given it’s hidden within a dome it might even be 4-face AESA (neither 4-face nor AESA admittedly but here’s a dome concealing a fixed panel non-rotating radar – http://cimms.ou.edu/~torres/par_nwrt_upgrades.html).

Also – power output? Being land-based means there are no issues staying within shipboard power budgets which again might affect the design decisions significantly.

In fact, on the “hidden inside a dome” thing, it might even be a S1850 inside there.

The RADAR at Saxa will be a TPS-77, which is now becoming the standard ground based Long Range Air Defence RADAR. It can be made road mobile, but that advantages of being mobile on an island as small as Unst are limited to say the least. Short version is, its an early warning RADAR, when it goes bang, you know its not a friendly fly-by.

Saxa Vord was part of the UKASCS until quite recently when Buchan and Neatishead lost their R3’s and status as separate stations and became Remote Radar Heads, like Saxa Vord and several others round the UK. While a positive step, this is only returning what we had previously and no way some expansion like the MoD might spin it. We do have some mobile radars in 1 ACC but they are few and as others have said these RRH would be vulnerable to attack. But they are not alone and link in with NATO, RN ships, AWACS, and CAA sites… Read more »

A bit of research. The below says its a 250nm radar from Lockheed Martin. So no better than a S1850 and at 270m above sea level its really no better. In a £10m project it’s maybe cheaper but LM are not UK so no tax back.

Good research, thanks for posting the link, but that very article says in the second paragraph… “The sources continued that the AN/TPS-77 will be relocated from the RAF’s Staxton Wold airbase on the east coast of England.” … so this is actually not a new radar at all, just shifting round existing assets. As a layperson it does seem to be a sensible relocation. If Russia is viewed as the primary threat (as opposed to Norway, Sweden, Germany, etc!) then planes getting to the East coast of England (the radar head is just outside Scarborough at the moment) would have… Read more »

There are (impressive) radars in Finnmark and doubtless Denmark as some coverage. Sweden long ago responded to Little Putin by overhauling its defence plans. Saxa Vord is a trip wire as it was in earlier times.

Defence. That is the English spelling chaps, in case you are confused. This site insists on using an American spellchecker. Vigilance is required.

Given the fate of the previous installation I do hope they have it VERY firmly welded down this time!
Saxa has the UK record wind speed – 187mph. It may have been more but at 187 the anemo set off towards Norway! 🙂

I’m assuming it’s much cheaper to make a radar capable of detecting stealth aircraft than it is to make aircraft less visible to those radars? I would imagine they’ve modelled what can maybe be possible with today’s best technology and made this as capable as it can at detecting that threat.

I would imagine that if things started to hot up a Type 45 or two (if they have the crew) would be pressed into service as a first line of Defence.

All you do is copy and paste MOD news releases

To successfully detect stealth aircraft, you need a multitude of radars operating on different frequencies. These would generally be lowish frequency range of 800MHz up to 4 GHz. These types of radar will let you know something is out there but won’t give you the resolution to say what it is or give you enough data to enable it to be tracked and targeted. For that you need a higher band radar say 8GHz to 40GHz. This will give precise target identification and resolution. However, if you take the F35 for instance, it has been designed to defeat X and… Read more »