A new aircraft type to Royal Air Force service is to be named the ‘Envoy IV’ in “a nod both to its crucial role in defence diplomacy and to previous Envoy aircraft in RAF service”.

The Royal Air Force say here that two new Dassault 900LX aircraft have been purchased to replace the BAe146 aircraft that were withdrawn from Service in March.

“The new Envoy aircraft will be based at RAF Northolt with No 32 (The Royal) Squadron, initially under contract with Centreline AV Ltd. For the first two years, the aircraft will be operated by mixed crews of RAF and Centreline staff, before upgrading to a full military and operational capability in 2024.” “I am delighted to be able to announce the naming of our new Command Support Air Transport aircraft as the Envoy IV. The name reflects our proud heritage, heralds the  arrival of a new aircraft type, and recognises its important mission. The fleet – and those who make it fly – play a key role in the future of UK Defence, moving quicky to build and strengthen partnerships, relationships and influence across the globe.”

You can read more on this from the RAF here.

So these two, plus the 2 Titan aircraft, plus the Voyager if needed.
Sorted.

Cessna Titan?… I hadn’t heard about that.

Another stealth cut though, 4×146 replaced by 2 airframes (and IMO the 146 was criminally under used).

Yes because the 146’s had more mission sets than just VIP transport, including MedEvac and cargo. They should have been worked much harder than they where.

The majority of those flights are genuine and require a seperate plane, its only a few govt ministers who abuse their priviledge by taking their mates/mistress/rentboy on overseas jollies with them.

Sadly most of the public cannot understand that.

I am “the public” and you are dead right.

But old and expensive to operate.

What, the Government Ministers?

Its why they need whips.

146’s were getting very old and cost a lot more to run (4 engines was a good idea in the 70’s but really not now) than the A320 and Dassaults/pretty much any decent modern biz jet. Queens flight stopped using the 146 years ago.

The Dassault is a really good bit of kit TBH: good range, very fast, very good climb performance and has got a fancy FLIR system (seen just below the cockpit windows) that is linked to the HUD so it can do full zero visibility landings.

The chartered AIrbuses are not replacements. Yes the 146’s needed replacing, but 2 airframes for 4 is still a cut. Queens flight stopped using the 146 yes but the airframes had a lot more practicality than just moving the Queen around, a small airframe, qualified for medevac and capable of moving small amounts of cargo is use full, as long as the joined up thinking is there, and in that context 4 airframes can be in 4 places, while 2 can’t.

Any idea how often they got used for medevac and cargo transport?

and a lonely single A109 Grand seeking companionship.

At least we received something!

Is this a case of it being a cut but not being a cut? Yes, a fall from four to two operated by the RAF, but we also have access to the Titan airframes. Okay, I know you can go even further back and the 146 airframes had a few additional uses, but still.. I’ll take this quite happily.

It will be nice to see them liveried up!

Yes, so will I. We have other things to worry about!

MorningDaniele. 24 degrees in Durbs today but 19 and rain tomorrow! Humiliating that our Important ones have to travel in a French Jet!!

Morning geoff. Rain here in Surrey, been lovely all week til now.

I know, but humiliating in a tongue in cheek way only for me as why not, if it is a good bit of kit.

Do it needs to be a 3 engine plane?

Redundancy because of the VIPs it will be carrying?

I assume it was what was on the market at the time at a good price during the surfeit of planes caused by COVIC?

And the RAF Voyager is more expensive to operate. Also, the BAE 146 had 4 engines.

That might have been true decades ago but 2 engine jets are just as reliable as 3 engines ones. Just look at the commercial airline fleets. Don’t see too many DC-10s or L1011s anymore.

I think it doos Alex

So why wasn’t the Bombardier Global 6000 chosen?

Runway length at Northolt. The Global 5000 or 5500 would have been fine though. I do wonder if 32 sqn could also do with a KingAir 360 for shorter hops.

is that the factor though as I understand 32 sqn is operating A321 from Northolt?

Thank you John – have a good weekend,

Putin flies in one.

It will need gold toilet seats – like the one in Johnsonski’s No10 flat, paid for by one of his Russian associates. Oh and solid platinum cigar humidors

Not the prettiest jet I’ve ever seen. lol

Does anyone know what the BAE 146 and 125 were called when in service? Did they have a name as most aircraft do?

Unsure about the BAE 146. I do know the SAAF used the VIP HS125 under the name Mercurius. The RAF Navigator trainer version was known as the Dominie.

The VIP 146 was the Statesman

No the Dominie was a specialist navigation trainer. The VIP aircraft never used the Dominie name

Never heard or read of one with the 32Sqn ones apart from K’s ref to the nav versions with 55R.

We bought french aircraft? (I refuse to capitalise the word).

Yes we bought French aircraft as no british airplane was up to the task.

The Scottish, Welsh and english countries do not make any planes good enough apparently.

I dont so much hate the french as find them all effeminate , especially the men , if France had actually spoken a Germanic language they might have been as industrious and Heroic as the Anglish .

Not to be obtuse, they tried speaking German for a few years but felt it didnt suit them…

Does the Bombardier Global still have parts made by Shorts in Belfast? If so, the Global 5500 would have been a better choice, but probably over budget.

I think the Belfast Bombardier sold that facility which was bought by Spirit Aerospace.

Yes, but did Spirit carry on making Bombardier Global bits in Belfast?

Slightly off topic but with the list of things we can’t say these days such as Man, Woman,Dwarf etc., surely time to change the antiquated and demeaning(to us peasants) term VIP? I always thought Important Person would suffice but some even think we now need VVIP with the advent of the Super Rich and Oligarchs? So a middle order millionaire Director or Mayor of a town such as say Hastings, might qualify as a VIP(puh) but Bill Gates has to be a VVIP or even maybe an EIP(Extreeemely Important Person!! What you think Lads, Lasses, Non-Binaries?

You woke people are feckin wyrd.

We are not peasants. We are VUPs.

No person from Hastings could be considered a VIP.

Why? Most other nations have many more, would you have HM The Queen travel by Ryan Air?

She’s 96. She isn’t going to be flying anywhere.

And still working harder than most. So why can’t she fly?

That was not my point. Her age is irrelevant.

regular airline is more than enough

Respectfully disagree. Security. Flexibility. Sudden need to relocate without fitting in with airlines or charter as you say below. Secure communications. Need to relocate IF the situation demands to a secure location without involvement from civilian airlines. This could apply to any VVIP and senior commanders nor just HM. It is a bit like expecting The Queen to live in a 3 bed semi in Surbiton, which the communists, republicans and assorted loony left with chips on shoulders all require. She is the the Queen, Queens don’t do that. I have no problem with that being a Monarchist. Likewise the… Read more »

The 146’s also had more jobs than just VIP transport as well, so it’s not like their ONLY job was moving the Queen about.

Agreed, 2 more aquired were in theatre in the gulf.

It is a cut, the reason I will take it is I worried it would be yet another gapped capability or just contracted COMO aircraft.

So buying 2 and eventually having all as military operated I will take it. Some were even suggesting Northolt should be closed, after MODEL and all the money spent on it…🙄

Would you rather a war started as our foreign secretary & diplomats were stuck waiting for Ryannair & missed the peace talks?

Utter rubbish, if there was a crisis they can charter a jet in five minutes. These things are just very expensive taxis unneeded by our military

Does your chartered jet have secure communications? Was it bugged just before it picks up UK delegation? Does it have defences against Manpads? Can it hang around while negotiations go on, or is it hired out elsewhere & has to leave?

Bit surprising they didn’t go with Bombardier Global Express, aircraft Sentinal R1 was based on, you would think RAF still had the people and parts that serviced that particular plane. If governments like to save money, you would think they would look for commonality. Really bad optics when high ranking UK officials arrives in a French Jet trying to sell UK technology. Since France and UK companies usually compete for same military contracts and Canada doesn’t, why give the French any marketing edge. Additionally, Rolls Royce engines on Global Express. Even the next version of the Falcon will be using… Read more »

Bombardier Global 5500 would have been perfect for operating out of Northolt, but probably over the limited budget.

I regret agreeing to purchase this plane for a high-ranking official.

RAF VIP? Not good for morale I think. Put them in a C17 like all our other boys and girls,

We have only got 8 C-17 & they are far too important to carry idiot politicians. Besides 4x 43000lb thrust engines is excessive fuel consumption when you can get away with 3x 6000lb thrust instead. 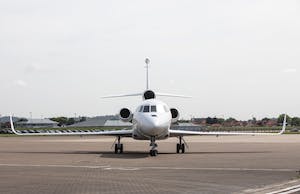 May 19, 2022
Two new Dassault 900LX aircraft have been purchased to replace the BAe146 aircraft that were withdrawn from Service in March.