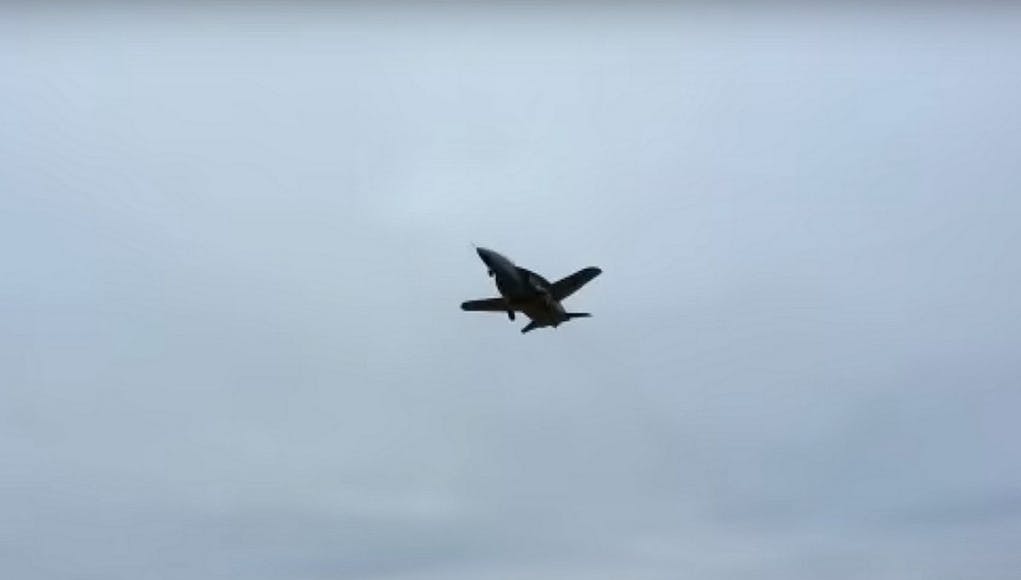 A Russian aviation company has conducted a maiden flight of a new forward-swept wing trainer aircraft.

The SR-10 is two-seat forward-swept wing trainer aircraft. It was earlier reported that 16 are to be produced however this cannot be verified.

On December 25th, the SR-10 made its first flight at an airfield near Vorotynsk, in the Kaluga Region, sdelanounas.ru website reported. It is understood that an initial engineering model was presented at MAKS-2009 airshow but in the following years the project encountered financial problems.

It was also reported maximum takeoff weight is 2,700kg. The forward-swept wing aircraft can also be powered with either a Soviet design AI-25TLSh engine or a modern Russian-made AL-55 gas-turbine jet engine making it attractive to nations using such technology.

I believe that is why

It means that you can still manoeuvre whilst close to stalling. Inner portion of wing stalls first but there’s still airflow over the ailerons

give u lot of advantage in manuverability,payload since the root connected backward.. but reduce control surface movement, created lot of flex

Perhaps they put them on the wrong way round ?

The wing vortex doesn’t leave from the wing tips as in swept back wings, it’s leaves from the wing roots. Therefore the wing vortices are closer to the fuselage, which apparently makes the aircraft more manoeuvrable. It’s cutting edge tech.

Bro forward swept wing are design and to give boost the Manoeuvrable ability with air drag of upper region can balance at subsonic while at low Supersonic speed . while they can fly higher altitude with no problem. It’s very complex design and Russian achieved it.

Many countries have produced aircraft prototypes like this, very few have decided it’s a good idea.

And I for one am surprised they have bothered on such a small and lightweight trainer ac. Intriguing.

Thanks for the replies. ? makes more sense ?

3 major issues are stall…aeroelasticity and yaw instability. All this for extra agility when the West are focusing on BVR Russia is still dabbling in merged combat which is 20 years old.

It’s for better arrangement of canopy, wing’s center section and the focus of lift. Also, it comes with 20% reduction of drag compared to the similar rearward config.

looks strangle stubby for a forward sweper, the X-29 and SU47 Bekuit were quite elegant in there form

Russian been playing around with this design for a few years now.. see the SU47 Berkut.

I know it’s a trainer.. just making a comparison with the SU47 design.

It’s Firkin The Su-47 . there are only two prototype . and one is spotted

No Kevin, it’s not, it’s a new aircraft.

Yes right coz Firkin is still under research works while there are no progress report in that. Surely this is any classified project

No, it’s a private venture and was also reported by RT and others, it’s a trainer.

Okkk then we can say its only technology Demonstrator

I thought the forward swept wing idea is a dead end?

It is…..Russia is over a decade behind in BVR sensors.

James Gale what exactly does this have to do with the content of the article?

United States had one in 80’s

I wonder if it’s derived from the YAK 130. It has a similar looking forward section and wing roots.

It is as it happens Paul, good call.

most trainers and tactical jets seem to look the same.

No, this is a standalone project.
Also, Yak-130 is twice as heavy.
I think, it was derived from Sukhoi’s aerobatic aircraft, but not sure.

No Douglas, it’s not. It’s a single engined training jet produced by a private company, perhaps read the article next time.

Why?! As a trainer it’s just pointless!

Not if you are training for high maneouverability close air combat

Trainers are to give pilots the necessary experience to move onto fighters. There’s no point in learning the manoeuvring characteristics of a trainer to then have to relearn them in a much larger, totally different aircraft.

it’s a trainer designed and built by a small company, apparently having the MiG-29 (and its’ derivatives) as a “target”. the designers claim the operating/training cost per hour is overall smaller compared to its’ competitors (without Yak-130 which is more advanced).
in 2009 there was another rather weird looking trainer, “Black Raven”, next to SR-10.
Now, for a trainer jet, it looks a lot better than Yak-152.

I bet it handles like a shopping trolley, which actually makes for a good trainer.

hornet? did they just copy the hornet?

Alot of that doesn’t ring right to me. The plane they were testing before was big. This one has a maximum takeoff weight of 2,700kgs?? That seems a bit light!

It s a trainer developed by a small private company.

That would make more sense. Thankyou

Is this the one? https://m.youtube.com/watch?v=7ANRxVJF7Xw

It’s for when you are shooting something your not supposed to, you can say it wasn’t me cos I was flying in the other direction lol

Is that so they can stick it in reverse when under attack?

1997 when Sukhoi were testing the S-47 Berkut. Forward swept wings nothing new there.

The su47 was rejected for mass manufacture as the stress on the wings was too much.

This is a new aircraft, the aircraft is new not the concept.

Correct, I as just mentioning why the su47 didn’t make the grade, for those unaware. I shall now research this new aircraft.

Hi Colin, articles are reposted every few months at different times so they reach new people. For example, over 70% of the people who have read this article today are new readers.

Please keep in mind that while it may not be new info you, it is to most others. Thanks.

Do you not think it would be smarter to post relevant up-to-date information that’s factually
Correct? This article was written in January 2016 yet there are videos of it on YouTube that are over a year old. Sack your researchers, the general public know far more than you seem to….

Bloody experts commenting everywhere! Thank god it’s not F35 experts for once. On that note where is my Sopwith Camel ?

Its not a new aircraft been around a few years.

This aircraft is fairly new, you’re thinking of the SU-47.

Hasn’t nasa had a forward swept wing test bed since the 80’s?

I think it will reduce efficiency of plan in battlefield. Probably require more power to fly and combat.