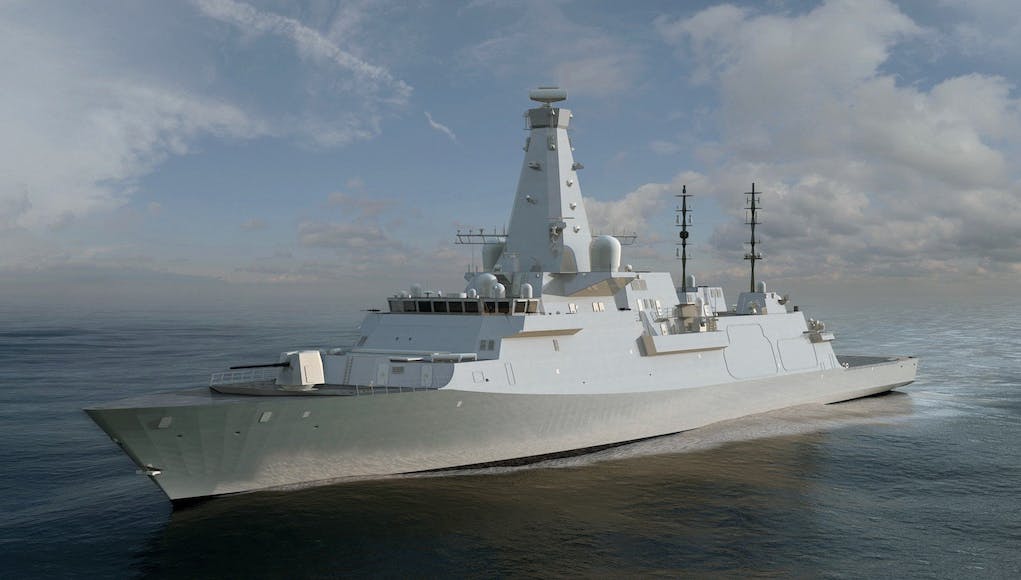 Frigate HMS Sheffield will be built at the BAE Systems shipyard in Govan.

Eight Type 26 Frigates are to be built in total with three in the first batch, the contract for the second batch will be negotiated in the early 2020s.

THREAD: Whilst @GavinWilliamson was visiting HMS Tyne, @StuartAndrew our Minister for Defence Procurement, was visiting one of our #T26 suppliers in Sheffield and has also announced that the 5th #T26 will be named HMS SHEFFIELD. pic.twitter.com/CFFBTNDqfE

“The Type 26 Frigate is a cutting-edge warship, combining the expertise of the British shipbuilding industry with the excellence of the Royal Navy. These ships will be a force to be reckoned with, there to protect our powerful new carriers and helping keep British interests safe across the world.

The contract is structured to ensure value for taxpayers’ money and, importantly, now designed to protect them from extra bills from project overrun. The investment will secure hundreds of skilled jobs at BAE Systems on the Clyde for the next twenty years, and thousands of jobs in the supply chain across Britain.”

Ooh! Another surprise, not.

Where is H M S Plymouth?

Only 1 ship without a name now, hull 7…… I think it should be Hms Edinburgh or Manchester, every capital city in Britain has a type 26 apart from Scotland!….

Yes Glasgow is in Wales

Fantastic news (knew it), but I thought Birmingham was announced as the fifth? Typo, or are they getting confused with this out-of-sequence naming system?

Edit: HMS Newcastle has also been named as one of the ships.

(I just realised my balls up I think)

Only one name left, I think it will be between Manchester and Coventry.

Manchester and Edinburgh I hope…

We have ONLY one CAPITAL CITY….
LONDON

As I understand it, London is no longer considered representative of the rest of the UK. I can’t think why?

Actually there were two announcements today for Type 26 ships. HMS Newcastle and HMS Sheffield are the names with only one remaining. My bet is on either HMS Manchester or HMS Liverpool.

Just writing this unrelated news as I’m watching the UK/EU future relationship parliamentary debate live. The UK and EU couldn’t agree on the access to Galileo satellite system so the UK will be going it alone with its own navigation system.

Naming warships that haven’t been ordered in order to sound hawkish on defence is the height of political bullshit. Seemingly typical of a May led government. Williamson is just more of the same.

Give it a rest Ron. We’ve been naming warships in advance for 200 years or more.

He is a little ray of sunshine isn’t he?

Crikey that must indeed have taken some serious intake of whinge pills to hit such depths of cynicism and negativity.

Not before they’ve been ordered sonny jim.

But they are 100% getting built! If we were naming 13 type 26s then ok, but 8 is the bare minimum anti submarine frigates the navy needs! Or what it’s getting more like! It actually needs 10 more!…

And cancelling them for even longer!

In that case HMS ‘Pie In The Sky’ would be more fitting. Naming ships that probably won’t be built, have they not anything else to do whilst HMS Britannia sinks beneath the waves. Bunch of braying Jack Asses!

Ship 7 should deffo be called Blake. OK, sorry, She’ll almost probably definitely without any doubt whatsoever, be called Edinburgh. In an Ideal World, We’d have Plymouth, Exeter, Southampton, Bristol, Liverpool, Newcastle and Portsmouth too. As a Wild card, I’d love to see an HMS Appledore Too.

As in, Blake’s 7. (not sure If It made any sense at all so I just thought I’d mention It here as Humour and Sarcasm are largely missing on this site despite my experiences over the years. It makes one wonder If anyone else on here Is actually Ex-Forces ???? ).

Depends on which country you’re speaking of…

Only Batch 1 Type 42 name not used so far is HMS Coventry ….

That’s a nice decision, particularly seeing as the last one was lost in battle. Their name lives on

Slugger
Reply to  The riddler

No. Replacements for Sheffield and Coventry were built as T22’s but sold off to Chile and Romania respectively. I think Sheffield was only 4 years old when sold with Coventry a little older.

It’s the Mk41 that will make them powerful, seaceptor will just protect them well.

And what about the mk41 makes it useful? We have no missiles that can be fired from it and have extremely small supply of thomahawk that those cant really be moved the the subs. For surface warfare there are options available that could easily fit in direct replacement for the typhoon in the same configurarion and vertical launch really isn’t needed against slower moving surface ships (Vs jets) Sea ceptor means that can escort ships and read anything about the Falklands (last real naval war) snd you will understand that even with the much bigger navy we didn’t have enough… Read more »

My point was that in order to deem a ship ‘powerful’ it has to be able to defeat other high end ships. Just having seaceptor will not enable that, mk41 enables us to add a range of weaponry that can. Said with gentle effect

As for the last type 26 name, well I do think HMS Edinburgh would be suitable, and no I’m Welsh. As for the type 31s well it depends on the weapons fit,if those ships which should be ordered in Dec are for peace keeping duties then possibly after Commonwealth nations such as HMS Canada, Australia, New Zealand, however if they are more aggressive in the weapons fit then name them after battles, HMS Trafalgar, Agincourt, Camperdown, Matapan and Alamein. Then again it these might get the Europeans a bit peed.

Agincourt has gone Ron but I do like the “Battle” idea.

France has an Austerlitz station.

I love the idea of a Commonwealth Realms class, an homage to our brother nations. Say there are five; HMS Canada, HMS New Zealand, HMS Australia, HMS Jamaica and HMS Papua New Guinea. All but the last have existing history in the Royal Navy Perhaps the other 11 Commonwealth Realms might be a little put out that they didn’t make the cut, but that’s a lovely excuse to order another 11 ships! Ah who am I kidding, instead of being given historic and significant names like those, it’s more likely busybody PC civil servants hanks will have the 5 of… Read more »

Ooh shocking Levi…and from a multi-cultural man like you!

HMS Malaya has an history.

OPVs were ordered in batches because the politicians were making it up as they went along, nothing like the present situation then……..

Why do they order them in small batches?. Surely they have heard about economies of scale and such. Order all 8, actively start on 2 , apply lesson learn to ships up the line.

I think the radar is expected to be upgraded on later batches for the RN T26. I would also like the RN to add additional mk41 so they can carry a credible number of cruise missiles, but don’t see the treasury signing off on it.

Bring back the old WW1 and WW2 V and W class names. I would like to see a real HMS Viperous.

Well there is a W class name I can think of to celebrate this government’s achievements!

Order a few more and I won’t care what you call them.

How about a HMS PRESTON ;P

For that matter what about HMS Leeds???

What about HMS Surbiton…