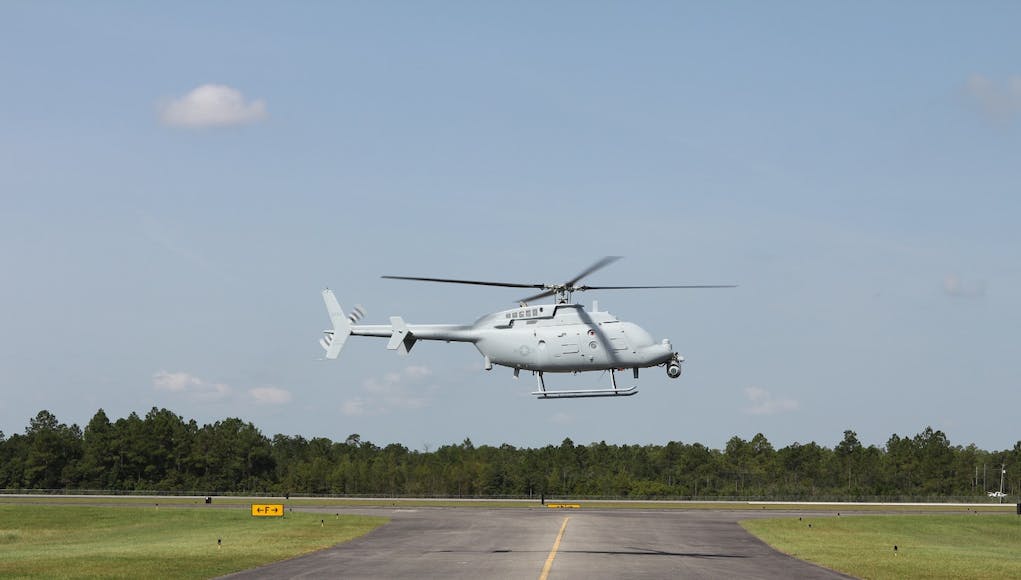 The U.S. Navy recently completed initial operational test and evaluation aboard the USS Coronado for the MQ-8C Fire Scout, which has over 1,500 program flight hours. The aircraft is a modified Bell 407 helicopter.

“Building on Northrop Grumman’s recent announcement of new production capabilities in Moss Point and a 40 percent increase in employment at the site, the ability to now conduct MQ-8C Fire Scout flight tests where the production occurs will bring new efficiencies and effectiveness to our local operations and improve our ability to serve the U.S. Navy,” said Melissa Packwood, programme director, Fire Scout, Northrop Grumman in a release.

ire Scout is a combat proven, autonomous helicopter system that provides real-time Intelligence, Surveillance, Reconnaissance, and Target-acquisition (ISR&T), laser designation, and battle management to tactical users without relying on manned aircraft or space-based assets. Fire Scout has the ability operate from any air-capable ship or land base in support persistent ISR&T requirements.

Northrop Grumman say that the system has completed more than 16,600 flight hours over 6,200 sorties. The US Navy has integrated a multi-mode maritime radar on MQ-8B and tested an onboard weapons capability, the Advanced Precision Kill Weapon System (APKWS).

The MQ-8B Fire Scout has also demonstrated the ability to operate concurrently with other manned aircraft while operating at-sea.

This may be completely wrong but couldn’t they make autonomous aircraft quite a bit smaller due to not needing the space for people, life support and all the cockpit displays and controls? This should also make it perform quite a lot better due to much better power to weight.

The complete visual answer to your question:
https://ibb.co/iefMZ9

Anyone know the latest on the Sw-4?
http://www.defenseworld.net/news/22052/Leonardo___s_SW_4_Manned_Unmanned_Helicopter_Performs_Flight_Without_Safety_Pilot#.W6enYOt4WrU

Anyone know if we have plans to invest in these for our navy? They would be a great addition to our manned fleet to take the pressure off them.

UK MOD are experts at having countless appraisals, concept programmes, demonstrations to “Inform” and then years later STILL not actually ordering anything.

So sadly I doubt it.

It would be interesting to know how much skill is required to fly these from ships. If this is significantly less than a flying a traditional helo, they could be the answer to a lot of the man power problems. Also can they be controlled remotely from land, in other words could they be controlled from a central UK based hub.

We need one of these on each opv. Or similar

These are autonomous aircraft so no skill is required to fly these from ships, they fly themselves.