A section of submarine is moved across a public highway at BAE Systems Submarines in Barrow, Cumbria.
Building the replacements for the UK’s current Vanguard-class deterrent submarines is one of the country’s greatest engineering challenges. @RoyalNavy @DefenceES @RNSubs pic.twitter.com/O8ypp9H6HY

The class has been purpose-built as a nuclear powered ballistic missile carrier, incorporating a selection of successful design features from other British submarines. Due to this it is quite unlike its predecessor Vanguard class, itself an adaptation of the Valiant class. 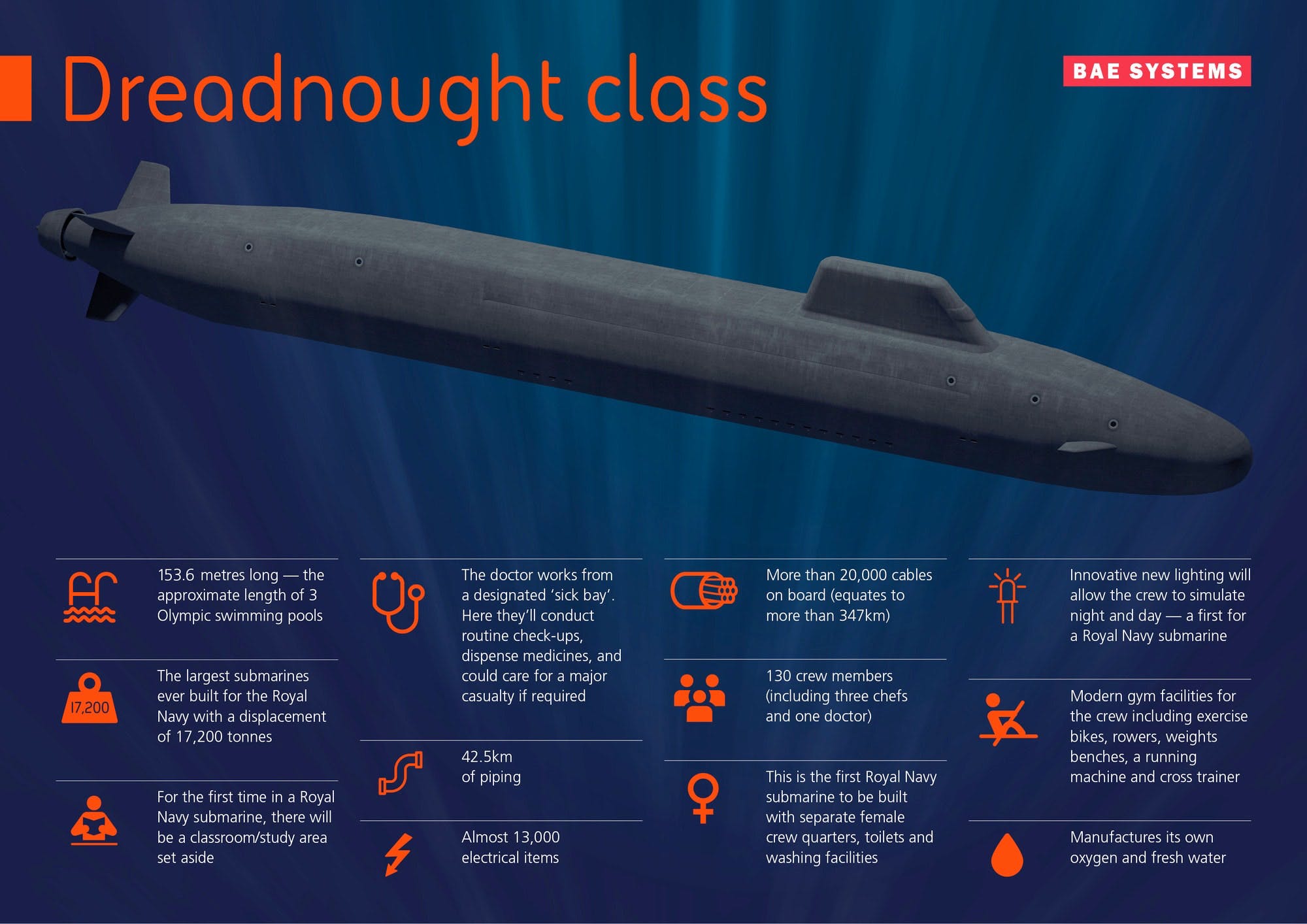 The programme already employs more than 2,600 people across MoD and industry, including 1,800 at BAE Systems. Thousands more will be employed in the supply chain with an average of 7,800 people expected to be working on Dreadnought each year throughout the duration of the programme.

At peak, in the early 2020s, BAE Systems anticipates employing more than 5,000 people on the Dreadnought programme.

Cracking picture that one.

I guess much is classified, and rightly so.

A photo can give much away.

It really wouldn’t surprise me in the component being transported was of a completely different shape and size, with a bit of awning and scaffolding to disguise it a little. A little bit of deception to an already highly classified site/build.

I guess we’ll have to take their word for it…😀

I’m curious about the addition of a classroom/study area. Seems an odd choice aboard a bomber.

Plenty of time to learn about things, and plenty to learn about on the sub itself let alone everything else. I don’t think they plan on deploying the bombs very often 🙂

I didn’t realise they built bombers in Barrow .

May as well study and get some other qualifications. Those patrols last a long time.

They are trying to make the boat more habitable.

Astute class is almost finished, these are being built in parallel. These are completely new with a new design for reactor.

Cheers, Alan; more reassuring on the Astute front. Yeh, was aware of reactor, etc but was more associating the natural leverage from the Astute class which, with the sudden lack of movement on Audacious, seemed at odds.
Many thanks.

Turns out my decision to be ‘positive’ on the Astutes didn’t pass 1st base, Alan. Unfortunately, ‘Astute class is almost finished’ was technically true but disingenuous with reference to the bit that isn’t. Audacious has now gone back to 2021 before availability, making it now a good 2 years late, at least.

I reckon they will scrap Astutes 6 and 7. IMHO not a snowballs chance in hell of getting finished before Dreadnoughts are all out. Just saying.

6 and 7 will be finished before Dreadnought. They are figuratively in it’s way after all

Is the Dreadnought not a clean sheet design ?.

It takes tech and successful designs from multiple british submarines.

Astute are not balistic missile subs

A very good question that I would also like answered. HMS Audacious is already a year late, and there are three more boats after her, with I think the last boat with an in service date of 2025. If Dreadnought is already in build, I think this is the second module we have seen being moved, I would like some clarity on where the other boats are in their build cycle.

Oh well, Nick……There’s secrecy for you – mainly there to cover official embarrassment.

Dreadnought is not based on Astute
It may have some technology that’s similar or a few components, but then the previous bomber was built a long time ago.
The last Astutes are all in build with Dreadnought following on

Just a quick question….I havent got much knowledge on these ships….just very interested in it….but will the new Dreadnought subs be able to fire anything else or is it just a nuclear capability?

Just torpedo’s for self defense.

Didn’t they build a dock hall so they could build these under one roof?

Th there are 3 astute in the dock hall at the moment, no room for assembly until at least one of those is complete, but can still crack on with individual modules

Surely we should be exporting submarines considering the expertise we have! And why has BAE built a submarine centre of excellence or what ever its called in barrow if they only build uk submarines, let’s get a nice order from abroad for after the dreadnoughts and Astutes. What will be built if no foreign orders?

Yes but it’s also a good idea to keep sensitive information about our submarines classified. I wouldn’t want to see other countries get Astutes or dreadnoughts considering their amazing design. Obviously if we were to export not so top of the range subs that’s different

Agree. Export conventional. Not SSN. That is an elite club and should stay that way.

Yeah I agree, one of Britain’s most successful submarines (27 built) that was operated by 5 nations was a conventional submarine “Oberon-class” from the 60s era and some were only decommissioned in the 2000s.

Regarding producing an SSK design for export,there might not be a need to re-invent the wheel,is there enough (any) potential in the Upholder design that could form the basis of a modern conventional Sub ?.

More submarines! With the huge proliferation of submarines, particularly AIP versions, of our navy is to be taken seriously we need many more than 7. 7 is fine for escorting the boomers and protecting the carrier group but leaves little if nothing spare. If we ever need to control large areas of ocean and in a conflict, with the other commitments we would struggle. Not to mention being outnumbered by smaller but very quiet and deadly AIP’s. So for me, once the astutes and boomers are completed we should be building 8-10 AIPs of our own for Atlantic, med and… Read more »

Glass Half Full
Reply to  T.S

I’ve had similar thoughts, perhaps even license building the latest Sōryū-class submarine, using lithium-ion batteries, as a proven fast track option. However, I suspect the RN may have its eye on the longer term and is pursuing the unmanned path as having greater potential, using a mix of light and heavy long range autonomous platforms. They already have programs in this area. The use of numerous small gliders might provide greater coverage and persistence with ability to monitor and detect at relatively low cost, especially wrt to operational costs – a mobile SOSUS if you like. Larger options might look… Read more »

The simple answer to your statement is to point out that we dont have an empire any more which we can assert strip of its wealth. Take that away and we just cant afford to have the sort of navy Fisher had. You could of course close all the schools and hospitals and stop repairing the countries infrastructure to fund a large intervenialist armed forces…. or just cut your clothe to suite your purse.

Barrow is at full capacity, so nothing else can be built. Much of the tech is sensitive and cant be sold abroad. Our allies have their own sub building ventures and are unlikely to want anything from us. I dont think we would feal with anything outside of near allies

The current ‘Save The Earth’ movement could pose a problem for future governments on the issue of nuclear deterrents? Whether we agree or not, the mood swing across the World towards saving the elements does not sit easily within the ideology of saving the planet, by being far more circumspect about such weapons? This growing mindset change is being embedded in the minds of the young both through the media and direct action in their places of learning. One thing is for sure, you can sell the concept of aircraft carriers being multi-purpose and designed to assist in weather disasters… Read more »

My understanding is that the common missile compartment on these boats will indeed have the flexibility to host weapons other than just nuclear BMs. They could therefore, outside of the CASD nominee, be assigned as potent fleet assets when circumstances require a conventional response. In theory you’d be contemplating 50% more units than the Astutes represent, albeit in a hybrid format. Now, on a separate issue my biggest pet hate by far is our use of the term ‘Saving The Planet’. Earth will last around 10 billion years in total with only the sun taking it out. One can assume… Read more »

The versatility of the ballistic boats may be more than just nuclear missiles, but in the broader picture, they are what they are. I’m playing devil’s advocate here by posing the idea that the current mindsets could change? During the Cold War the public focus was on the military balance and mutual destruction, (apart from the ‘Ban the Bomb Groups’), and the public’s perception that the deterrent was necessary. Today, there is a polarisation in the whole field of nuclear deployment thinking. Some believe until there is a complete global ban on such systems, they will require replacement. Others, believe… Read more »

Not advocating a new role, just hypothesising based upon the statements made by military/manufactures that the fexibility of the CMC accommodates more than SSBM. Content to leave how they’re in fact utilised up to the respective naval staff!

Your understanding is a bit off

Ah yes, but the nukes are dual purpose as they can also be used to take out the extinction killer asteroids, don’t you know! On a separate note, how deadly would a 200kg tungsten dart be if it was falling from space at hypersonic speeds? Old crony Corbyn was on about scrapping the nukes. But if that did happen, could the Trident be re-purposed to launch a spread of tungsten darts (can’t used depleted uranium as its bad for the environment) at the target from low earth orbit. These would then rain down on a target (I hate to say… Read more »

The old Rods from God approach. Although what you’re suggesting seems more like a more advanced version of Lazy dog.

Correct, rather than basing the rods on a satellite, which would cost an enormous amount of money, due to put the sdtellite in orbit then install the rods. The cost of lifting tungsten rods to orbit alone would be astronomical. By installing them on a ICBM/SLBM you get the same effect but at a much cheaper cost. Unfortunately, the small packaging and massive destructive effects that a nuke can do, significantly outweighs any benefits that the “Rods from God” could achieve. Ok, there’s the long term radiation problem! But as I said earlier you would need at least 50 rods… Read more »

I was about to say exactly the same Davey…….mmmmmm

DaveyB- Something along those lines has already been considered https://en.wikipedia.org/wiki/Prompt_Global_Strike

Except these could be launched much cheaper from land based targets. SSBNs are designed to go and hide in the deep sea so that they cant be taken out in a pre emtive attack. Kinetic weapons from space being much cheaper over all would be more numerous and spread out geographicay so could be land based. On another point I dont see a dreadnought sculkkng about in the shallow waters of the Mediterranean for instance in order to launch smaller missiles at third world targets

Very very clever, I see what they have done, no way will any other ASW asset pick up the Dreadnought class on any sonar, as it will give off the signature of a large wedding marquee……clever, damn clever!

5 to 7 SSKs built to the latest Swedish or German design would be a good up lift for 4 reasons:

1) free up the ssn force to cover the carriers and deterrent.

2) make up for the delays in the Astute programme

4) Provide submariners with a southern base at Plymouth and also shorter deployments. All if which should help with recruitment and retention.